Good morning. It’s a big day in the U.S.: The Electoral College meets, and the mass vaccination campaign begins. 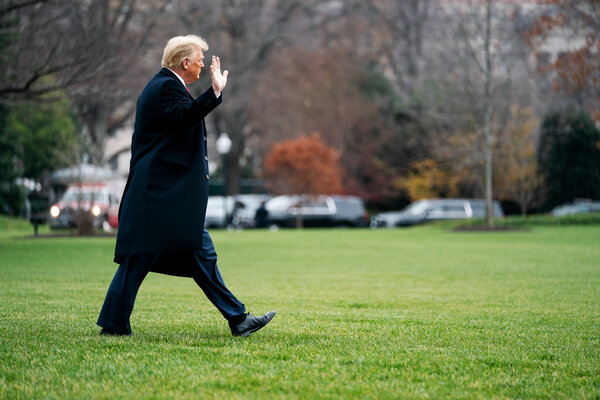 The members of the Electoral College will meet in states across the country today. And while President Trump has tried to disrupt the process, his chances of succeeding remain very slim.

Still, Trump’s actions have made many democracy experts anxious about the Electoral College — specifically, how it could undermine elections in the near future. The Electoral College may have become a bigger threat to the healthy functioning of American democracy than at any other point since the 1800s, these experts say.

There are two main reasons, and the first one will sound familiar: The Electoral College is more likely to deny victory to the winner of the popular vote than in the past. The main reason is that political polarization has led to landslides in more states than in the past.

The popular-vote loser almost won the presidency again this year, for the third time in 20 years. If Trump had received just 0.7 percentage points more of the vote in every state, he still would have lost the popular vote badly. Yet he would have won exactly 269 electoral votes, causing an Electoral College tie that Congress likely would have decided in his favor.

Imagine how disenfranchised many Americans would have felt in that scenario.

The second issue with the Electoral College may be even more troubling, scholars say: The Constitution allows states to award their electors almost however they want. They are not required to choose the winner of the state’s vote, as Jesse Wegman of the Times editorial board points out. (Jesse, who’s a lawyer, has written a book on the problems with the Electoral College.)

A state could pass a law, for instance, saying it would award its electors to whichever candidate would best serve the national interest. Or a state legislature could step in after an election, by claiming that the will of the voters was unclear, Richard Pildes of the N.Y.U. School of Law has noted.

These possibilities might have sounded outlandish a few years ago. They sound less outlandish today, Pildes and others say.

A sitting president is attempting to overturn the outcome of an election and remain in office despite losing the vote. Almost 90 percent of that president’s party members in Congress refuse to acknowledge the true winner of the election. Top officials in 18 states and more than half of House Republicans supported a lawsuit trying to reverse the result.

These moves indicate that much of the leadership of one of the country’s two political parties is willing to toss aside the country’s democratic traditions to support a power grab. It’s an example of what the political scientists Steven Levitsky and Daniel Ziblatt — in their book, “How Democracies Die” — call constitutional hardball.

Some observers believe that the situation will calm down once Trump leaves the presidency and that the Electoral College process will continue to be a boring, technocratic one that reliably rewards the vote winner in each state. Others aren’t so confident.

Related: A small group of Republicans are plotting a challenge on the floor of the House of Representatives in early January to try to reverse Joe Biden’s victory.

And more from Jesse Wegman: A new Opinion article on why majority rule is so important.

Pfizer began shipping its vaccine across the U.S. yesterday, the first of nearly three million doses. Some health care workers could receive their first shot today.

Trump delayed a plan to distribute vaccines to senior White House staff members in the coming days. The first doses are generally being reserved for high-risk health care workers.

The federal government is rushing to roll out a $250 million public education campaign to encourage Americans to take the vaccine. Public support is split: 60 percent of people said they were likely to get the shot, a recent Pew poll found, while more than 20 percent were strongly opposed.

Germany will enact a nationwide lockdown over Christmas, closing most stores and schools and strictly limiting gatherings.

Hackers broke into several U.S. government networks, including those at the Treasury and Commerce Departments. Experts said a Russian intelligence agency was almost certainly behind the attack.

The Cleveland Indians will change their team name after years of protests from fans and Native American groups. They may keep the Indians name and uniforms for the 2021 season while working to shift as early as 2022.

New York police officers fatally shot a man who opened fire near a crowd of hundreds of people outside a Manhattan cathedral.

Lindsey Boylan, a former aide to Gov. Andrew Cuomo of New York, accused him of sexual harassment. “I could never anticipate what to expect: would I be grilled on my work (which was very good) or harassed about my looks,” she wrote on Twitter. “There is simply no truth to these claims,” the governor’s press secretary responded.

The Wall Street Journal’s opinion editor defended an op-ed on Jill Biden that called on her to refrain from referring to herself as “Dr. Biden” because she is not a medical doctor, and accused Democrats of a coordinated response to the piece.

Britain said it would loosen restrictions on blood donation by gay and bisexual men, beginning next year. One activist called it “a fundamental shift toward recognizing people are individuals.”

A Mother’s Justice: Armed with a pistol, a fake ID and disguises, Miriam Rodríguez did what the Mexican authorities couldn’t: She tracked down her daughter’s killers and put them behind bars.

The Media Equation: Apple TV killed the production of a show based on Gawker after Tim Cook — Apple’s chief executive, whom Gawker outed as gay in 2008 — found out about it. The message? Big tech increasingly controls which stories get told, Ben Smith argues.

Lives Lived: Charley Pride was born in 1934 on a sharecropping farm in Mississippi. His resonant baritone and ear for melody helped him break into white-dominated country music, making him the genre’s first Black superstar. Pride died, from complications of the coronavirus, at 86.

He was the son of a harsh father who had a disappointing music career and a mother who died of tuberculosis when he was a teenager.

He got his break when he managed to put one of his cantatas into the hands of Joseph Haydn, then perhaps the world’s greatest composer, who agreed to teach him.

He received a note from a patron, as he was leaving his native Bonn for the Haydn tutelage in Vienna, that read, “With the help of unceasing diligence you will receive the spirit of Mozart from the hands of Haydn.”

Ludwig van Beethoven made good on that prediction, somehow overcoming the slow, agonizing loss of his hearing over the next 35 years to compose symphonies, marches, fugues, concertos, sonatas and, of course, cantatas that have endured for centuries.

This week brings Beethoven’s 250th birthday (the exact date most likely being tomorrow or Wednesday), and The Times has a panoply of coverage to celebrate: a (pre-pandemic) road trip retracing his steps; a profile of the woman who made pianos for him; an interview with a conductor who uses period instruments to recapture the original sound; an appreciation by Anthony Tommasini, the Times critic; and much more.

A good place to start: A selection of Beethoven’s greatest music, curated by The Times.

Here are some of the poetry books that The Times’s poetry columnist loved this year.

A group of Black dancers, musicians and entertainers have turned Atlanta into a hub for online talent.

The pangram from Friday’s Spelling Bee was volatility. Today’s puzzle is above — or you can play online if you have a Games subscription.

P.S. Maggie Haberman went on NPR’s Fresh Air to discuss the end of the Trump presidency.

Today’s episode of “The Daily” is about distributing the vaccine. The latest Book Review podcast features the Nordic noir master Jo Nesbo and David Michaelis.

Lalena Fisher, Claire Moses, Ian Prasad Philbrick and Sanam Yar contributed to The Morning. You can reach the team at [email protected].