The U.S. population grew by only 7.4 percent over the past decade, the smallest increase since the 1930s, the Census Bureau reported yesterday. This morning, I want to explain why and talk about both the upsides and downsides of slower population growth. 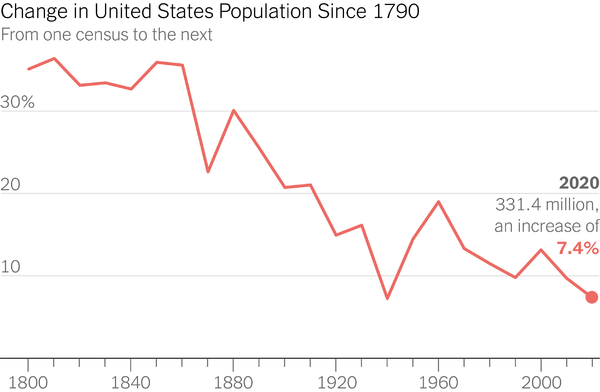 The biggest cause of the population slowdown is the declining birthrate. Today, the average American adult of child-rearing age has 17 percent fewer children than in 1990 — and about 50 percent fewer than in 1960. The U.S. still has a higher fertility rate than Japan and Germany, but it is in the same range as Britain and Sweden and below France and Ireland. There are now more Americans 80 and older than 2 or younger.

The upsides of less growth

There are some advantages to slower population growth. A lower birthrate can expand the economic opportunities for women, especially because the U.S. has relatively flimsy child care programs. Historically, birthrates have declined as societies become more educated and wealthier.

Lower levels of immigration can also have upsides. The big wage gains for American workers during the mid-20th century had many causes, including strong labor unions, rising educational attainment and high tax rates on top incomes. But the tight immigration restrictions of that period also played a role.

And the big downsides

Over all, though, the slowdown in population growth is probably a net negative for the U.S. — as both conservatives (like Ross Douthat) and liberals (like Michelle Goldberg) have argued.

For one thing, polls show that many Americans want more children than they are having, as The Times’s Claire Cain Miller has noted. But the slow-growing incomes and a shortage of good child care options have led some people to decide that they cannot afford to have as many children as they would like. The decline in the birthrate, in other words, is partly a reflection of American society’s failure to support families.

(President Biden wants to address these problems by expanding child care and pre-K programs and extending a child tax credit in the recent Covid-19 relief bill. Those proposals will be part of his speech to Congress tomorrow night.)

A second problem with slow population growth involves global affairs. The U.S. now faces the most serious challenge to its supremacy since the Cold War — from China. The future path of the two countries’ economic growth will help determine their relative strength. And population growth, in turn, helps determine economic growth, especially in an advanced economy. To have any hope of keeping up with China and its vastly larger population, the U.S. will probably need bigger population increases than it has recently had.

Viewed in these terms, the population slowdown is a threat to national security. “I don’t know of a precedent for a dynamic country that has basically stopped growing,” The Atlantic’s Derek Thompson has written.

In Matthew Yglesias’s recent book “One Billion Americans,” he argues that the U.S. should rapidly increase legal immigration to lift economic output. “America should aspire to be the greatest nation on earth,” Yglesias, the author of a Substack newsletter, writes. The only realistic alternative for that role is China, an authoritarian country that is jailing critics and committing egregious human rights abuses.

Higher levels of immigration also have a direct benefit: More of the millions of people around the world who want to move to the U.S. get the chance to do so.

More from the census report:

The population continued to shift from the Northeast and the Midwest to the Sun Belt, and California will lose a congressional seat for the first time in history.

The shifts will complicate Democrats’ efforts to retain House control next year and win the Electoral College in the future.

If New York had counted 89 more people, it would have kept the seat it lost (and Minnesota would have lost a seat instead).

Countries, companies and powerful individuals are helping India fight its second wave, but that probably won’t stop the crisis.

The Biden administration took another step to help India, saying it would send up to 60 million doses of the AstraZeneca Covid vaccine to other nations.

Turkey, which ranks fourth in the world in new daily cases per person, ordered a three-week lockdown. In France, lockdown rules have become dizzyingly complex.

The E.U. is suing AstraZeneca over delays in shipping hundreds of millions of doses.

Can you have alcohol after the Covid vaccine? (In short: probably, but not too much.)

The Supreme Court will hear a challenge to a New York law that limits the carrying of guns, a test of whether it’s moving right on the issue.

Biden is proposing an extra $80 billion for the I.R.S. to catch tax evasion by high earners.

The Department of Homeland Security will begin an internal review to root out extremism.

A Republican-led effort to recall California’s governor, Gavin Newsom, is headed to a special election.

The Justice Department is investigating the Louisville police, more than a year after the shooting death of Breonna Taylor.

Family members of Andrew Brown, a Black man who was killed in a police shooting in Elizabeth City, N.C., last week, have demanded to see body-camera footage of his final moments. The authorities released a 20-second snippet.

China plans to delay retirement — now at 50 or 55 for women, and 60 for men — as its population ages and pension funds run low.

“Russia now has two national leaders: Mr. Putin in the Kremlin and Mr. Navalny in prison,” Oleg Kashin, a Russian journalist who has known Navalny since 2003, argues.

The Times Opinion section is retiring the term “Op-Ed” after 51 years. Opinion pieces by outside writers will be “Guest Essays.”

Flourishing: Are the tulips brighter this year, or is that optimism talking? See for yourself.

Lives Lived: Helen Weaver fell in love with Jack Kerouac months before “On the Road” rocketed him to literary fame, and recorded their romance in an enduring book of her own decades later. She died at 89.

Last night, Shohei Ohtani became the first player since Babe Ruth to start a game as a pitcher while also leading Major League Baseball in home runs. Nearly every other modern player is either a hitter or a pitcher. Ohtani is simultaneously one of the world’s hardest-throwing pitchers and best sluggers — and a fleet base runner. He is “a unicorn, a miracle, a revelation unto himself,” Sports Illustrated’s Emma Baccellieri has written.

There is a problem, though. Since moving from Japan in 2018 to join the Los Angeles Angels, Ohtani has often been injured. He has needed arm surgery, and has had knee problems and blisters. Many people have begun to wonder if Ohtani should avoid extra strain and stick to only hitting.

“Everybody’s rooting for him, but if he continues to struggle with regular pitching duties, it’s almost like a Bo Jackson kind of career — we know he’s capable of being a two-way star (in Bo’s case, football and baseball),” our colleague Tyler Kepner told us. “But we only get a taste of it, and we’re always left hungry for more.”

In his appearance last night, Ohtani gave up four runs in five innings — and had two RBIs — as the Angels beat the Texas Rangers, 9 to 4.

This one-pot wonder of chicken, black beans and rice will make everyone at the table happy.

Off-White is a sought-after streetwear brand. Like other big brands, it sues over trademark infringement. A lot.

A review of Jhumpa Lahiri’s third novel, “Whereabouts,” her first in Italian.

The hosts discussed the Oscars.

The pangram from yesterday’s Spelling Bee was confirm. Here is today’s puzzle — or you can play online.

P.S. Nikole Hannah-Jones will join the University of North Carolina as an endowed journalism chair. She will also continue working for The Times.

Today’s episode of “The Daily” is about U.S. climate credibility. “The Improvement Association” finale asks: Is there more than one way to build Black political power in North Carolina?