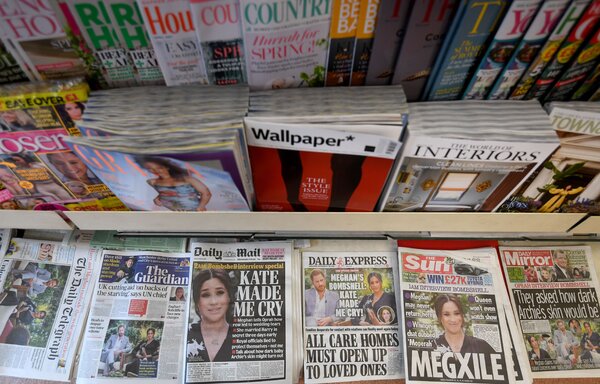 May I remind your readers that the vast majority of Brits welcomed Meghan to our island with heartfelt warmth? We found it genuinely exciting that she was an American of color and not from a superprivileged white background. We were overwhelmed by the unstuffy address by an American bishop, Michael Curry, at the wedding.

Gradually, our love was eroded by her public actions, such as her inappropriate dress and behavior at Wimbledon, and, during a recession, spending millions of taxpayers’ money on refurbishing a perfectly acceptable home (we all remember that £5,000 copper bathtub).

We watched the Oprah interview with cynicism. One small example: Meghan didn’t know she had to curtsy to Her Majesty. Really?

The royal family’s alleged behavior toward what they deemed as a foreign intrusion into their homogeneous family is once again a wake-up call for the entire world, including my country, Canada, to re-evaluate its connection with such an entity. Should we Canadians keep bowing to them in humility as we do when we take the oath of citizenship, or should we turn the page instead? We need to have a healthy discussion about the royal family’s relevance in today’s world.

Meghan and Prince Harry have done a remarkable thing in escaping and saying no to racism and abuse. No one should accept an abusive environment — even in magnificent royal residences.

There’s not a member of the royal family who hasn’t at some time been skewered by the tabloid press. You don’t hear them crying about it. If you choose to marry into a royal family, how naïve do you have to be not to expect criticism and the same unfortunate racism that exists in the United States?

Meghan, you should have known that life as a royal would be tougher than being a second-tier TV star, but you turned a blind eye to reality. And when reality set in, you’re crying foul and turning to an international TV audience for sympathy.

It’s time to suck it up and behave like an adult with responsibility to the family you chose to marry into. Do you think they are “happy” with the life they live all the time?

Re “Do Liberals Care if Books Disappear?” (column, March 7):

Ross Douthat’s critique of liberal silence about and thus complicity in the cancellation of six Dr. Seuss books applies as well to many in the broader First Amendment community.

Censorship is censorship even for the most virtuous of motives, and taking these books out of the marketplace is an indelible example of self-censorship.

Ray Bradbury’s depiction in “Fahrenheit 451” of a society in which firefighters burned books deemed too dangerous for the public to read includes a memorable passage in which the state censor recalls that at first the decision to do so “didn’t come from the Government down” since “there was no dictum, no declaration, no censorship to start with.”

Private censorship is dangerous, too.

Floyd Abrams
New York
The writer, a constitutional lawyer, is the author of “The Soul of the First Amendment.”

“Evangelical Adoption Agency Shifts to Serve L.G.B.T.Q. Parents Nationwide” (news article, March 2), about the laudable decision by Bethany Christian Services to work with L.G.B.T.Q. parents, affirms what many of us know: There does not need to be a conflict between living one’s faith and treating L.G.B.T.Q. people with fairness and dignity.

Bethany’s decision is particularly relevant as the Supreme Court considers the Fulton case, which could have lasting consequences by allowing adoption agencies to reject qualified parents simply based on who they are.

As the head of Equality Federation, which works to ensure that L.G.B.T.Q. people can thrive and provide for their families, I see firsthand how discrimination causes harm. And as an adopted person, I am forever grateful that my adoption agency’s top priority was finding me a home with loving parents, rather than turning people away based on religious beliefs.

Bethany’s decision to serve all families is a reminder that nondiscrimination protections and religion can exist side by side and ensures that more children can find forever homes. It’s a blueprint for how religiously affiliated organizations can and do work with L.G.B.T.Q. people.

The 140 Chilean women who became pregnant after the health care system gave them defective contraceptives deserve justice. Their sexual and reproductive rights were violated. The state must be held accountable, and we cannot overlook the responsibility of the manufacturers.

Justice systems and human rights groups increasingly hold private companies accountable for human rights violations, mostly for environmental destruction and allying with armed groups carrying out such crimes. This corporate accountability needs to be extended to violations against the reproductive rights of women and adolescents.

Accountability is more than imposing fines on manufacturers. There needs to be proper redress, because the actions of these companies will have life-changing effects on women.

Both the state and the companies have failed Chilean women and need to be held responsible. I hope that after the Chilean State’s inaction, international human rights bodies review these cases and take emergency measures.