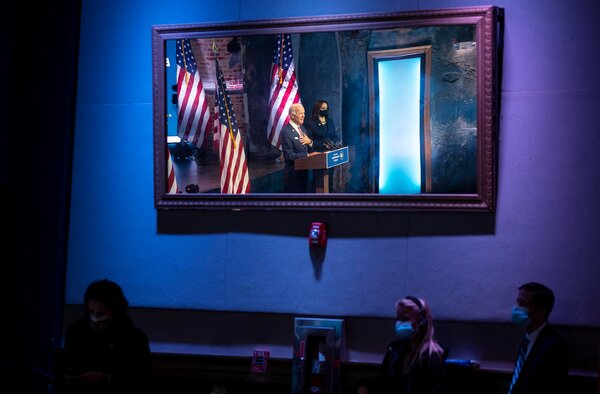 After the 2016 election I saw a side of America that I had fully believed was going to run rampant for the next few decades. I had no idea how much angst I had been holding inside until this moment. I feel lightheaded from relief.

I am so overwhelmed with pride to be American again. I don’t have to worry anymore about having to tell my Muslim child one day that his own president didn’t want him here. He will believe me as I raise him with the understanding that character matters and that honesty is rewarded.

There is still so much work to be done, but it is a beautiful thing to know that we have just shown the world — and one another — that we are ready to begin to heal. And for now, it feels nice to breathe.

Jenan A. Matari
New York
The writer is the founder and editor in chief of MissMuslim.

We all exhaled hard when Joe Biden and Kamala Harris were elected. Now is the time to elevate the values on which they campaigned and to honor those whose efforts were integral to their election.

I propose that they create a cabinet-level Department of Diversity and Inclusion. Such a department would ensure that Black, Latinx, L.G.B.T.Q. and all marginalized people are always kept in mind when decisions are made. They need to be in the room where it happens at all times!

In Search of Lost Time in the Pandemic

Reading “Down the Basement Stairs and Into the Past” (Domestic Lives, Real Estate, Nov. 1) made me feel as if I were part of a movement. I, too, have been going through long-forgotten boxes full of letters abandoned nearly 50 years ago. And because of that, I, too, have found many long-lost friends during these days of social distancing and isolation.

But what is different is that, to my great surprise, when I sent those letters written in the 1960s and 1970s back to their authors for them to see, I discovered that they had also saved mine, and sent them back to me.

So I have not only been able to reconnect with very old friends I had always wondered about, but to my much younger self as well.

I smiled all the way through your article.

If there’s even one small good thing that can come out of this horrible pandemic, it’s the decluttering that has led to reconnecting with people from your past.

I, too, had a big box in the basement that, once opened in the early days of the lockdown in Kansas, led me on that proverbial trip down memory lane.

It’s been a lovely trip! And because of it, I’ve enjoyed an email reconnection with a smart, witty classmate from Northwestern, circa 1972.

As the article says, “the past is tricky,” but it can also make the present much more pleasant.

Wrist fractures, which are usually caused by a stumble and fall onto the outstretched hand, deserve far greater attention. This is particularly so for people over 65, because these injuries serve as the “canary in the mine.”

Despite the potential for permanent disability, they unfortunately take a back seat to hip fractures, even though there are severe consequences if remedial actions are not taken.

Roy A. Meals
Los Angeles
The writer is a clinical professor of orthopedic surgery at U.C.L.A.’s Geffen School of Medicine and the author of “Bones: Inside and Out.”