We all need uplift this terrible year, so here’s inspiring news about some young heroes and the good they’ve achieved on a wrenching topic.

That said, this is a big deal, and it happened only because of young people who spoke up and forced difficult conversations that government leaders had dodged.

I’m thrilled to report that Fleites has been deluged with offers of housing, jobs, education and counseling, and she and her dogs have moved into a long-stay hotel with help from a GoFundMe backed by readers. One benefactor has volunteered to pay for her education to become a vet tech. 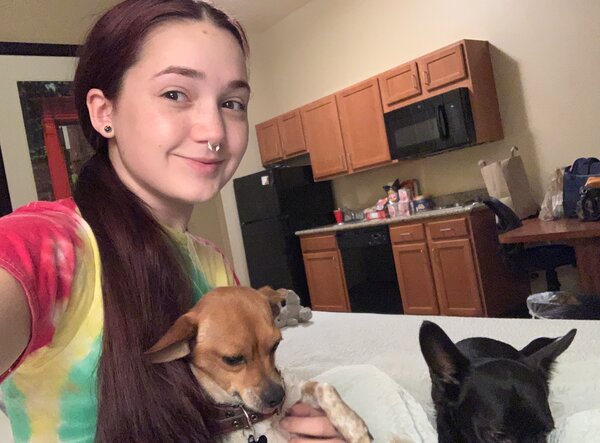 When I texted her that offer, she texted back: “Omg that’s sooo awesome! I can’t wait to go back to school! I am ecstatic to hear this …. I really really want to go to school to become a vet tech. It’s just hard going to school while living in a car with 3 dogs.”

Folks, this is disgusting.

Most of the results probably don’t involve children, but too many do, and the site is luring pedophiles who can then upload their own videos. This is Jeffrey Epstein on an industrial scale.

The issue isn’t pornography but rape. It is not prudishness to feel revulsion at global companies that monetize sexual assaults on children; it’s compassion.

We can also do much more to support children to make them less vulnerable to exploitation. That means fixing America’s dysfunctional foster care system and tackling our unconscionable levels of child poverty.

I don’t pretend that there are simple fixes. But some combination of civil liability, criminal prosecution, government regulation, sanctions by credit card companies and banks, and international cooperation to prevent companies from moving to less regulated countries, can induce better behavior. We may never eliminate child sexual abuse material online, but we can reduce the number of girls and boys who at 14 have their lives shattered by a wealthy corporation monetizing their most mortifying moment.

Thanks to readers for donating $4.8 million so far to my annual “gifts with meaning” initiative. The three nonprofits I recommend support girls’ education in sub-Saharan Africa, cataract surgery to repair blindness in Asia and Africa, and help for low-income students in the United States so they can complete high school and enter college. There are also volunteering options in the United States. More information at KristofImpact.org.