This is an article from Turning Points, a special section that explores what critical moments from this year might mean for the year ahead.

Turning Point: Early in the Covid-19 pandemic, businesses around the world shifted to mandatory remote-working arrangements. By June, some 40 percent of the American work force was working from home.

That working women have been pulling double and triple duty during the pandemic is, by now, old news. When women have to juggle their corporate day jobs along with a disproportionate share of family caregiving and housekeeping — as way too many of us do — the situation gets grim fast. Study after study tells the tale.

An annual report on women in the workplace from McKinsey & Company, the management consulting firm, and LeanIn.org, the nonprofit devoted to women and the professional workplace, laid out the toll that the pandemic and accompanying recession have taken in the United States: Women, especially women of color, are more likely to have lost their jobs; for those who still have jobs, the structures that made it possible for many to both work and care for families have crumbled. Schools, for example, switched to holding remote or hybrid classes, forcing many working mothers to serve as teaching assistants and attend to their professional responsibilities at the same time.

According to the report, one in four women in the United States are now thinking about slowing down their careers or leaving the work force altogether. This should surprise no one. Such trends threaten to undo years of progress by women in the workplace.

But the numbers don’t tell the whole story. Women are dealing with a once-unimaginable amount of stress. People used to keeping many balls in the air are now dropping them regularly, as their various roles — professional, caregiver — come into direct conflict hour by hour, even minute by minute. As Katherine Goldstein, host of the podcast “The Double Shift,” recently pointed out: “I feel like all mothers need to agree on a new opener. Instead of [asking] how you’re doing, like, ‘Have you cried today?’ ”

Seven months into the pandemic, three women who had lost work this year opened up to us on Harvard Business Review’s “Women at Work” podcast, which I co-host, and told us how they’re managing. We heard from Veronica, who had finally made the switch last year from web design to massage therapy — her dream career — and was loving her new life. But the pandemic had forced the studio where she worked to shut down, and now she’s trying to get back into web design. Veronica is making the necessary adjustments to her new reality, doing what she must to earn a living.

We also heard from Emily, an artist whose opera company had gone dark in March and who hadn’t performed in months. “The struggle is not about the job. The struggle is about meaning,” she told us. “Am I a singer if I’m not singing?” For those of us whose sense of self is inextricably tied up in our work, not working can strike an existential blow. As the sociologist Aliya Hamid Rao has written, “Employment, or the lack thereof, has become an intrinsic marker of a person’s moral worth.”

While our new reality has been brutal, there have been some small mercies. Millions of us are no longer dealing with the misery of commuting, and workplaces have become far more flexible, a trend that is likely to continue.

However, we can’t ignore the fact that in the absence of our commutes we’re working longer hours — and it’s time we’re not getting paid for. All this new flexibility poses tougher challenges to our work-life balance and is forcing us to recognize that certain norms have gone stale.

The long-held reverence for the “ideal worker” is taking a serious hit. The idea that the most valuable employee is the one who puts in the longest hours, is always available and prioritizes work over all else never made much sense to most working women, who, after all, have always had to juggle responsibilities at work and at home.

Joan C. Williams, the founding director of the Center for WorkLife Law at the University of California’s Hastings College of the Law, noted this year in a Harvard Business Review article that the ideal worker concept is itself dependent on the “breadwinner-homemaker” model, a relic of an earlier age when the average man went off to his job and the average woman kept house. Ms. Williams argued that “the ‘ideal worker’ norm has long exacted a higher toll from women — who not only did their day jobs but were also expected to deal with responsibilities for their families and households.” She continued: “If there was ever a time to put to rest the old-fashioned notion of the ideal worker, it’s now.” Amen. 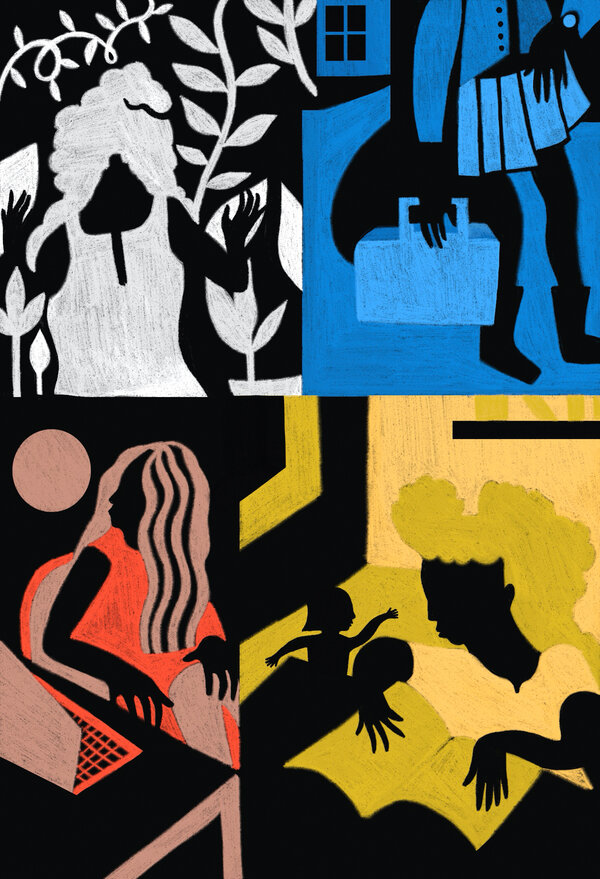 We’re also gaining a deeper understanding of the fact that our value doesn’t depend on our having formal jobs. Tim O’Brien, chairman of the Leadership for the 21st Century program at the Harvard Kennedy School, points out that when we conflate our professional roles with a sense of self, we lose perspective, and our judgment suffers. He wrote, “This pattern worsens when you conflate your role with self-worth, thinking you are only as valuable and useful as the role you formally fill.

Emily, the opera singer, seems to be taking this insight to heart. “I don’t know when I’m going to get to perform again,” she told us. “I guess I have to just remind myself that I’m not a human being based on my job. I can’t define myself by that.” Kept from the calling she has pursued for 15 years, she’s taking a fresh view of herself.

Certainly these last few months have forced many women to take on new perspectives. Lisa, a health care industry entrepreneur and the third guest on our podcast, told us: “When Covid hit, everything stopped. I got off the treadmill, and it actually felt refreshing. As difficult as it has been, it has been a good thing for me personally. I’ve been able to turn the negative into a positive.”

Similarly, in her research Dr. Rao has identified resilience and determination in many of the women who have suffered job losses. “It forces women to rethink how they want to get back into the labor force,” she told me. “They think about getting back in on their own terms: ‘I’d rather have more control over what I do. Maybe I’ll open a private practice or become a consultant and work for myself.’ ”

I don’t want to paint too rosy a picture here; 2020 has been relentless. Many women will have a lot of ground to make up in terms of advancement and pay; they may never recover fully. Others may find new paths forward that ultimately are more fulfilling for them. That would be welcome.

One lesson we should all take from the crises of 2020 is that it’s time for women to calibrate their expectations to their own aspirations — not to some outmoded external ideal — and for employers to respect that.

We’re not going to get back to “normal.” And in some ways that’s a good thing.

Amy Bernstein has been editor of Harvard Business Review since 2011. She is also a co-host of the “Women at Work” podcast.