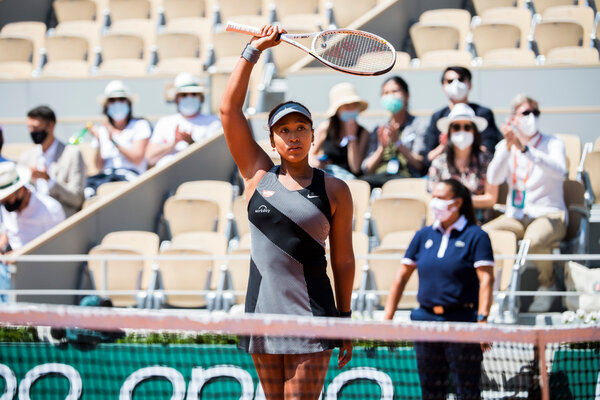 The avalanche of articles about Naomi Osaka’s withdrawal from the French Open addresses the mental health of sports professionals, but fails to look at the big picture of celebrity mental health and whether journalists, well meaning or paparazzi, become the story rather than reporting it. After all, sports stars are a subset of the celebrity class.

In recent years, we have seen the sorrowful stories of Meghan and Harry, Britney Spears and Lindsay Lohan, to name a few, teased out by the press, clearly to the detriment of the subjects.

It is high time for both the organizers of celebrity events and the press to rethink post-match, postgame and red carpet press frenzies. If the subject of a press grilling does not want to do it, back off, and no penalties for the subject. Celebrities of all kinds are entitled to their privacy, even if it means the media misses a scoop.

As someone who has struggled with anxiety and a paralyzing fear of public speaking for most of my adult life, I relate to Naomi Osaka’s decision to withdraw from the French Open, and I think she is very brave for being so forthright. It’s a shame that her fear of public speaking prevented her from advancing in a tennis tournament.

Anxiety never goes away, but as you get older, you learn better ways to cope. My advice to the Roland-Garros officials: Try harder. Yes, there is an expectation that elite athletes engage with the press, but should an athlete have to withdraw from a tournament because her fears of the press overshadow her drive to play?

I was excited to watch the greatest players in the world compete at the French Open, and now we are all missing out on an opportunity to watch the best tennis.

Israel Is Fighting for Its Life

In “Were My Criticisms of Israel Fair?” (column, June 3), Nicholas Kristof avoids the most crucial issue facing Israel. It is the commitment of Hamas, other terrorist groups in the region and Iran to eliminate it.

That doesn’t mean that Israel is beyond criticism, or that there aren’t strategic choices that Israel can make that would improve its relationship with the Palestinian population, and it doesn’t mean that it can’t ever work toward a two-state solution. It just means that those who want to destroy it cannot be dealt with as a normal opponent in a conflict.

They are driven by their obsession with eliminating the Jewish state, and leave Israel with no choice but to defend itself in the most powerful way.

Mr. Kristof implies that Hamas is a legitimate defender of the Palestinians in Jerusalem. That is like seeing terrorism as a response to oppressive actions by a government. Hamas must be seen as a malignancy that has entrapped its fellow Palestinians in endless conflict and suffering.

Major companies have invested billions of dollars and ignored public warnings by knowledgeable auto executives that futuristic driverless cars will not be ready for public use for years to come.

Citizen groups are battling to stop passage of pre-emptive legislation that Senator John Thune is trying to ram through Congress on behalf of manufacturers, granting driverless cars exemptions from federal safety standards and limited liability. The companies want the revenue for driverless cars but not the responsibility for the public hazards involved.

Rather than wasting billions, the auto industry’s No. 1 priority should be preventing thousands of needless deaths and injuries by installing in all new cars and trucks innovative, affordable technologies to avoid vehicle crashes, like automatic emergency braking, lane departure warning and blind-spot detection that are already available on some higher-priced cars.

In addition, it could devote its skills and resources to perfecting nonintrusive in-vehicle detection systems to combat the killer driver behaviors of drunken, distracted, drowsy and drugged driving, saving as many as 9,000 lives a year, a quarter of the annual highway death toll.

Joan Claybrook
Washington
The writer is a former administrator of the National Highway Traffic Safety Administration.

Re “Meat Processor Is Victim of a Ransomware Attack” (Business, June 2):

The recent cyberattacks on U.S. business infrastructure — most notably against the Colonial gasoline pipeline and JBS meat plants — clearly demonstrate the need for increased domestic cybersecurity. But more important, these attacks illuminate the grave risk of allowing extreme corporate consolidation of critical industries like energy and food production. When only a handful of companies control a vast majority of any industry, a disruption at just one company can cause immense chaos.

On the energy front, a logical solution is to transition rapidly to wind and solar power networks, which by their nature are more distributed, more sensibly scaled and more resilient than fossil fuel systems. On the food front, a solution lies in the Farm System Reform Act, which directly tackles the dangerous consolidation of our food system by banning new corporate factory farm operations (and the expansion of existing ones) and investing much-needed resources to transition our country to more sustainable, reliable, smaller-scale food networks.

The best defense against crippling attacks on massive corporate infrastructure is to replace the systems that enable them.

Wenonah Hauter
Washington
The writer is executive director of Food & Water Watch and the author of “Foodopoly: The Battle Over the Future of Food and Farming in America.”

Re “Estimates Suggest Death Toll in India Is Far Higher Than Reported” (news article, May 26):

I am horrified and amazed that India’s shockingly high and probably vastly underestimated death toll from Covid-19 has not spurred authorities in the United States to proceed with greater caution in reopening our country. With only 40 percent of Americans fully vaccinated against the coronavirus, the C.D.C. issued new mask guidance on May 13, saying that fully vaccinated people need not wear masks in most indoor settings.

Didn’t the C.D.C. understand that the majority of unvaccinated people would not want to be identified as such and would also stop wearing masks indoors? Now, because of the C.D.C.’s misguidance, most states in the U.S. have fully reopened and are allowing people to mingle without masks in public indoor spaces.

This is precisely the sort of fatal error committed by India’s leaders when they prematurely declared they had beaten Covid-19 and lifted that country’s coronavirus restrictions. The scale of the suffering and loss of life taking place in India is almost unimaginable. I shudder to think that a similar wave of human tragedy is poised to strike the U.S.

A Need for the Police

Calls to defund the police were a bad idea from the beginning. It’s no surprise that crime would flourish where there is a lack of policing and/or police resources. It doesn’t take a rocket scientist to know that where there are no police officers, there will be more crime.

Many of the people who create these uber-progressive policies such as defunding the police don’t live in communities where the police are most needed. Instead of reducing the number of police officers or defunding police departments, rerouting those funds to programs such as de-escalation training would be a better idea.