Analysis & Comment Opinion | State Election Officials Are Under Attack. We Will Defend Them. 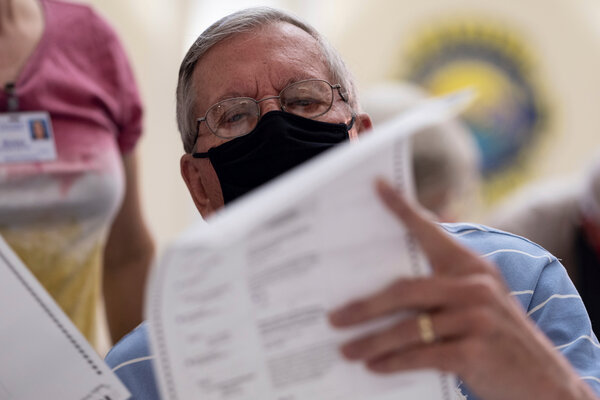 By Bob Bauer and Ben Ginsberg

Mr. Bauer, a Democratic lawyer, and Mr. Ginsberg, a Republican lawyer, were co-chairs of the 2013-14 Presidential Commission on Election Administration.

Tucked into many of the election laws Republicans are pushing or enacting in states around the country are pernicious provisions threatening punishment of elections officials and workers for just doing their jobs.

Laws like those already passed in Republican-controlled states like Georgia and Iowa, no matter their stated intent, will be used as a weapon of intimidation aimed at the people, many of them volunteers, charged with running fair elections at the local and state levels. By subjecting them to invasive, politically motivated control by a state legislative majority, these provisions shift the last word in elections from the pros to the pols. This is a serious attack on the crucial norm that our elections should be run on a professional, nonpartisan basis — and it is deeply wrong.

It is so wrong that having once worked together across the partisan divide as co-chairs of the 2013-14 Presidential Commission on Election Administration, we have decided to come together again to mobilize the defense of election officials who may come under siege from these new laws.

Bear in mind that this is happening after the 2020 election, run in the midst of a once-in-a-century pandemic, went off much better than expected. Voter turnout was the highest since 1900. A senior official in the Trump administration pronounced it the “most secure election in American history,” with “no evidence that any voting system deleted or lost votes, changed votes or was in any way compromised.” Multiple recounts, contests and court cases brought by former President Donald Trump and his allies failed to persuade any courts or state officials to overturn the results of any election.

The new laws establish civil penalties for technical infractions and subject officials to threats of suspension and even criminal prosecution. Iowa state election officials are now subject to fines of $10,000 and suspension for any actions that “hinder or disregard the object of the law.” They are also subject to criminal penalties when seeking to address disruptive conduct by partisan poll watchers. In Georgia, an election official threatened with suspension may appeal, but the law restricts state-financed support for the individual’s legal defense. The Georgia secretary of state, the chief election official, has been removed from the chairmanship of the State Elections Board, demoted to nonvoting ex officio status.