Home » Opinion | The Military’s Extremism Problem Is Our Problem

There is no doubt that there are far-right extremists among the military community: Service members and veterans have been arrested in connection with violent plots, including a plan by a Coast Guard lieutenant to attack prominent Democratic Party officials and a plot by two Marine Corps veterans to kidnap the governor of Michigan. Wade Michael Page, an Army veteran, killed six people at a Sikh temple in 2012.

This issue has been much in the news since Jan. 6. Coverage has focused on the military connections of those involved in the attack on the Capitol, often implying they represented anti-democratic tendencies among our military or that military training made these individuals especially dangerous.

There is reason for concern: Roughly 14 percent of the people arrested and charged for participating in the attack had some association with the military or law enforcement, according to reporting by NPR. Most of them were veterans. Veterans also seem to be a significant portion of those charged with conspiracy for planning the attacks.

In response, Secretary of Defense Lloyd Austin mandated that commanders force-wide spend a day holding discussions among their units on extremism. Soldiers assigned to protect the Capitol during the inauguration were vetted for extremist views. And the military services are renewing efforts to prevent recruitment of extremists and to stop radicalization among the ranks. These are meaningful actions that warrant recognition. (The views expressed here are those of the authors and not those of the Army, Department of Defense or the United States Military Academy.)

But the truth is that once one considers the insurrectionists’ overwhelmingly male composition, the share of veterans among those arrested over involvement in the Capitol attack does not significantly confound historical averages. Analysts are even unsure whether veterans were disproportionately present at the event or merely more visible during “its most aggressive actions.”

The University of Maryland’s Profiles of Individual Radicalization in the United States data set has found that of far-right extremists for whom military background information was available, 23 percent were veterans or were actively serving — roughly in line with the proportion of American men with a military background. Meanwhile, we don’t actually know the extent to which extremism is present in the active force. The lack of open-source military records or membership rolls of white nationalist groups make analysis of active-duty extremism difficult.

But focusing on statistical proportions misses the more important issues: No number of veterans involved in violence against their own government would be acceptable. Moreover, the attention to percentages draws focus from more subtle but equally troubling aspects of the problem of extremism among veterans and the military.

Many analysts have expressed concern that recruiting veterans can make extremist groups more dangerous by bringing in tactical knowledge or expertise. This certainly is a supply line that should be cut off. But the tactical proficiency on display at the Capitol on Jan. 6 was neither particularly impressive nor available exclusively from military training.

Instead, military and civilian defense leaders should also be concerned about a different commodity extremist groups seek by recruiting veterans: political legitimacy.

The American public’s positive view of the military has historically put veterans in rarefied air. This has been particularly true among political conservatives and older Americans. By bringing in such figures, extremist organizations seek to co-opt that status for mainstream credibility.

We observe this directly in the way groups like the Oath Keepers and Three Percenters intentionally blur the lines between themselves and the active force. Appropriating military iconography, equipment and cultural symbols, they attempt to benefit from the military’s credibility while posing as inheritors of a proud American military tradition. 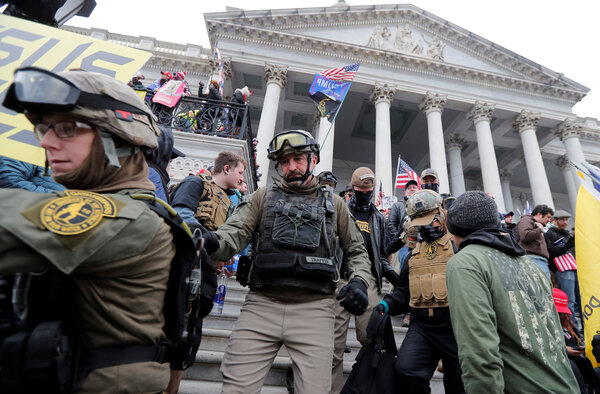 Second, an overemphasis on statistical proportionality suggests that the problem — and its solution — can be found solely within the military. The chain of command absolutely has important responsibilities to manage the small-unit efforts necessary to root out extremism in the force and to undertake the engagement with the public to secure the institution’s credibility. Military leaders should fiercely distinguish their organization from look-alike extremist groups by educating the public on the difference between active-duty service members and veterans. The military should also take seriously the task of educating the force about its constitutional oath and teaching transitioning service members about the threat posed by extremist groups and rampant disinformation.

But a full accounting of the problem requires both the military and society at large to address the problem.

The military is not the principal arm of accountability for the activity of veterans who are private citizens — American society bears that responsibility. Once these individuals cross into private life and engage in the sort of unacceptable violence that we saw on Jan. 6, they are the purview of that society: Civilian law enforcement will try them, civilian courts will make determinations of justice, and civilians must realize they represent not the military, but the public.

Americans in military service and veterans aren’t some sealed-off segment of the population; they are us. And like other Americans, they are yearning for the connectedness of community and a sense of belonging. Finding civically responsible ways to stitch our veterans back into their communities would diminish the pipeline of veterans into extremist groups, just as it gives jihadists and gang members offramps. Remember that veterans stood among the heroes on Jan. 6, too.

Addressing his victorious soldiers, then-colonel and future President James Garfield declared, “Let it not be said that good men dread the approach of an American army.” The responsibility to make it so falls on us all. To the extent that military service — active or prior — poses an extremist threat, we shouldn’t expect only the military to solve this problem for us.

Kori Schake leads the foreign and defense policy studies team at the American Enterprise Institute. Michael Robinson is an Army strategist and assistant professor of international affairs at West Point.