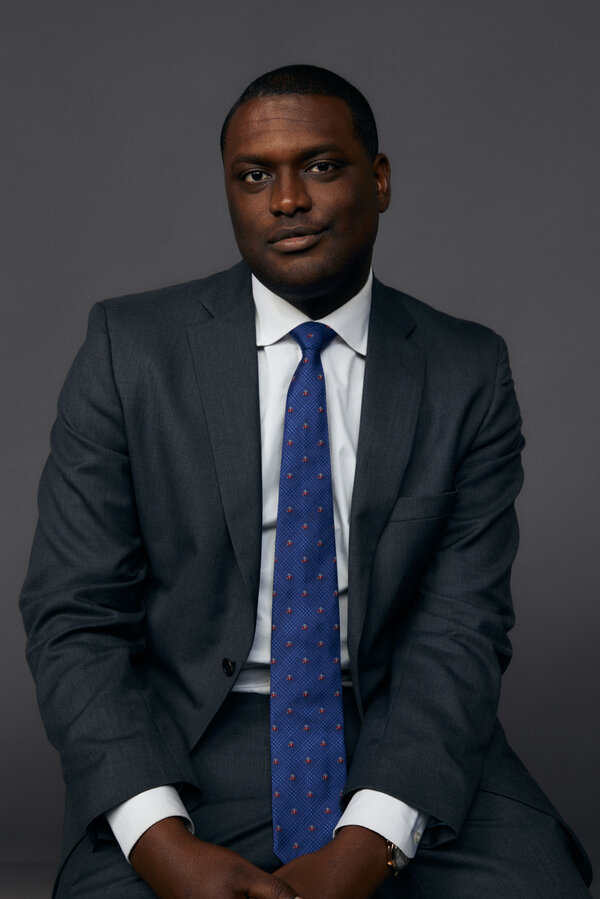 By The Editorial Board

The editorial board is a group of opinion journalists whose views are informed by expertise, research, debate and certain longstanding values. It is separate from the newsroom.

This interview with Mr. Jones was conducted by the editorial board of The New York Times on July 25.

Kathleen Kingsbury: We only have a short period of time, so I hope you don’t mind if I just jump in —

I don’t mind at all.

Kathleen Kingsbury: Most polls indicate that the Democrats are going to have a hard time holding on to Congress in the midterms. Can you talk a little bit about, if that scenario plays out, what you think could get done in a Republican-controlled Congress, but also maybe one idea that gets at the way you work in a bipartisan manner.

So of course, I don’t buy the idea that we’re going to lose the House or the Senate.

In fact I think polling shows we’ve got a really good chance of keeping the Senate. But I would start from the perspective that I already have, which is that of someone who has been a change agent in an already gridlocked Washington.

Last fall, when few people thought we could get Build Back Better passed through the House, or the Infrastructure Investment and Jobs Act passed through the House and enacted into law, I brought progressives and our conservative Democratic colleagues and, yes, ultimately, a few Republicans — 13, to be precise — even voted for that Infrastructure Investment and Jobs Act.

Infrastructure is just one example of the kind of thing that we can do in a bipartisan way. And as someone who has been more focused than probably anyone else in Congress on democracy these days, I understand that we are in a very, very polarized environment. But there are other areas.

I think you’ll see this week, for example, once the Senate hopefully passes the CHIPS bill, you’ll see bipartisan support in the House of Representatives. I will vote for that bill.

[The Senate passed the CHIPS and Science Act on July 27, after this interview was done, and President Biden signed it into law on Aug. 9.]

Mara Gay: OK, great. Thanks. So inflation is hitting Americans hard, but especially in New York, where the cost of living, particularly housing, is soaring. What would you do to ease those concerns for voters in the district, particularly on housing, as a member of Congress?

Absolutely. So starting with the cost of housing, I recognize that when health care is very expensive in America, that means that people are less able to afford housing, and the cost of groceries, and yes, paying for the cost of gas at the pump. And so I want to start by just framing it in those terms, because they’re all inextricably linked.

Housing in particular — I support building as many more units as possible. Because when we expand our housing stock, the cost of housing will go down. And we’ve seen that happen sometimes. It’s sort of a first principle of economics, I guess.

It is also the case that we need to pass Build Back Better. I mean, we are talking about tens of billions of dollars for NYCHA [New York City Housing Authority] in particular, and — you know, which is going to be felt in the district and places like Campos Plaza, where I visited, and Red Hook House — it’s the single, or the second largest, NYCHA housing development in all of New York City, and obviously the largest in the borough of Brooklyn.

We also, through Build Back Better, are going to create 300,000 additional Section 8 housing vouchers. That’s deeply personal for me, as someone who grew up in Section 8 housing, and who’s housing insecure. I’m also proud to co-sponsor a bill called the Homes for All Act.

It’s ambitious. It would create an additional $9.5 million in affordable housing units throughout the country. And I’m running to fight to bring as many of those units to Lower Manhattan and to Brooklyn.

[The Homes for All Act would invest $800 billion to build 8.5 million new public housing units, and $200 billion for 3.5 million permanent affordable housing projects.]

Jyoti Thottam: Thanks. So on democracy, which you mentioned, what do you think Democrats should be doing to protect democracy and secure voting rights?

I think they should pass a bill that I co-authored. And we did pass it through the House, where we do the lion’s share of the people’s work in Congress. It’s a bill called the Freedom to Vote: John R. Lewis Act.

I’ve authored key provisions of that legislation, from the Right to Vote Act, which would finally enshrine the right to vote under federal statutory law — right now, it’s just been interpreted narrowly by an increasingly right-wing Supreme Court. It also contains my bill called the Inclusive Elections Act, which responds to a Supreme Court decision issued in July of last year, called Brnovich v. D.N.C., which guts the clear intent of Congress, the original meaning of Section 2, which we amended to further clarify, even in the early 1980s.

We also have to pick up, I would submit — and I think, as everyone understands — just two more Democratic senators. We came just two votes shy of strengthening our democracy through passing the Freedom to Vote: John R. Lewis Act. We couldn’t get those two to support an exception to the filibuster, simply to save American democracy.

It’s an embarrassment. And if that were happening in any other country, we would look very unfavorably on that. That is what I think history will record, more than anything this year, how we responded to the threat of fascism, which is represented by the modern-day Republican Party.

Can I also say something else on democracy? And I know that there are plenty of other questions. The Supreme Court has been an accomplice this entire time. The wave of racist voter suppression that we are currently experiencing has been unleashed in decision after decision, starting with Shelby v. Holder in 2013.

That’s how you get state laws in places like Georgia and Arizona and Texas and Florida, long before it became popular. And certainly, my colleagues on the Democratic side scoffed at me. I introduced legislation to add four seats to the Supreme Court.