The Fight Over Voting

Good morning. Virus hospitalizations keep rising. The Los Angeles Dodgers win the World Series. And Democrats and Republicans are in an intense fight over voting. 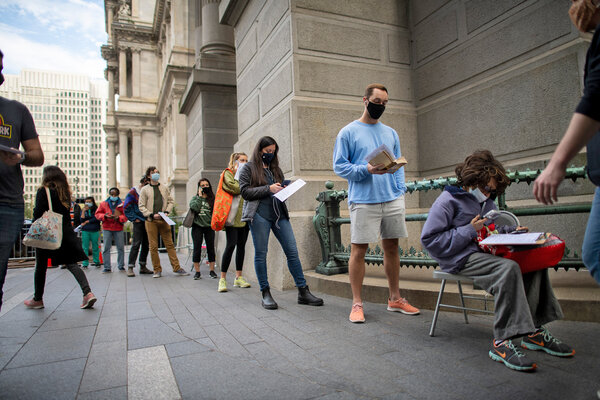 Much of the fight involves voting by mail, which many people would prefer to do this year, to minimize their risk of contracting the coronavirus at a polling place. Lawyers have already filed more than 300 lawsuits, across 44 states, over issues related to pandemic voting. The most important cases are in the battleground states on which the presidential election or Senate control could hinge.

Here are the latest developments:

Pennsylvania: The state’s highest court has ruled that election officials should count mailed ballots that arrive up to three days after Election Day. Pennsylvania Republicans are trying to get the Supreme Court to reverse the order, so that only ballots received by Election Day will count.

North Carolina: Republicans and the Trump campaign have asked the Supreme Court to block the state’s board of elections from extending the deadline to receive mail ballots. The board has said ballots can arrive until Nov. 12, as long as they were mailed by Election Day.

Wisconsin: The five Republican-appointed justices on the Supreme Court sided on Monday with Republican officials in Wisconsin, ruling that ballots must arrive by 8 p.m. on Election Day to count. (A lower-court ruling would have allowed state officials to count any mailed ballots postmarked by Election Day and received up to six days later.) In response, the state’s Democratic Party is urging voters to return mail ballots in person — to a drop box or clerk’s office — rather than mailing them.

Nevada: The Trump campaign has sued to stop the counting of absentee ballots in the Las Vegas area, evidently hoping to challenge the signatures on many ballots. Last night, the campaign and Nevada Republican Party filed a separate lawsuit, seeking detailed information on the vote-counting process.

Texas: The state’s top court yesterday upheld a policy announced by Greg Abbott, the Republican governor, which limits each county to a single drop-off box for mailed ballots. The state’s largest county — Harris, which includes Houston — is home to 4.7 million people.

Michigan: A conservative judge yesterday overturned an order by Secretary of State Jocelyn Benson, a Democrat, and ruled that people could carry unconcealed guns at polling places on Election Day.

In many of these cases, Republicans have argued that changing voting rules because of the pandemic could lead to fraud (a claim that’s largely baseless) and that allowing ballots to be counted after Election Day leads to confusion and chaos.

Democrats have argued that protecting people’s right to vote, during a national crisis, should be top priority. Democrats have also pointed out that some Republicans have changed their position on the counting of mailed ballots: When late-arriving ballots seemed likely to help George W. Bush in Florida in 2000, Republicans argued that the state should count them.

For more: Factcheck.org catalogs the false statements that President Trump made yesterday about voting. In Lawfare, Zahavah Levine explains the flurry of recent lawsuits. In The Washington Post, the election-law expert Richard Hasen analyzes the Supreme Court’s recent rulings. And The Times offers advice about making sure your mailed ballot counts. (Short answer: Use a drop box.)

Campaigning in the Georgia town where Franklin Roosevelt received polio treatments, Joe Biden called the place “a reminder that though broken, each of us can be healed. That as a people and a country, we can overcome this devastating virus. That we can heal a suffering world.”

Trump visited Michigan, where he framed the election as a “choice between a Trump boom or a Biden lockdown.”

Almost 70 million people have already mailed in their ballots or voted early, about half of the total number of votes that were cast in the 2016 election.

Daily polling diary: There was no significant change in the polls after the final presidential debate, The Times’s Nate Cohn writes.

Hospitals around the U.S. are reeling, many of them in parts of the country that initially had been spared the worst.

The Los Angeles Dodgers, after years of near misses, beat the Tampa Bay Rays, 3-1, to win their first World Series title since 1988.

The governor of Louisiana declared a state of emergency as Hurricane Zeta churned toward the Gulf Coast. The storm is projected to make landfall later today.

A judge in Brooklyn sentenced Keith Raniere, the leader of the cultlike group Nxivm, to life in prison for sex trafficking, racketeering and other crimes.

The latest from The Times’s investigation of Trump’s taxes: Since 2010, his lenders have forgiven about $287 million in debt that he failed to repay.

A federal judge ruled that the writer E. Jean Carroll could sue Trump over a decades-old rape allegation. The Justice Department had tried to block her suit.

Americans are buying guns at a record rate, including many people who hadn’t previously owned one.

A Morning read: Mort Zwick, 82, hasn’t been able to see his family since the start of the pandemic. He told The Times how he was coping: “Every time I miss them, I think of how lousy they were at one stage of their growing up.”

The Times can help you navigate the election — to separate fact from fiction, make sense of the polls and be sure your ballot counts. To support our efforts, please consider subscribing today.

Residents of Puerto Rico are American citizens who have no voting representation in Congress. Next week, they will vote on a referendum about whether they want to change that — and have the island become a state.

Ultimately, the decision is up to Congress and the president. But if the referendum passes, it will increase the chances that a future Congress and president would grant statehood to both Puerto Rico and Washington, D.C. The platforms of the Democratic and Republican parties both support allowing Puerto Ricans to decide if they want to become a state.

“Statehood for Puerto Rico will permanently end the disenfranchisement and discrimination inherent to territory status, which for more than a century has denied the U.S. citizens on the island their rightful place as equal members of the American family,” George Laws Garcia, a statehood advocate, told me yesterday. (Here’s a longer version of his case, in The Boston Herald.)

The makeup of the Senate now gives a disproportionate amount of political power to white Americans, for two reasons: Small states are heavily white, and the two most populated parts of the country with no Senate representation — D.C. and Puerto Rico — are heavily Black or Hispanic. Puerto Rico would become roughly the 31st largest state by population, similar to Iowa and Utah.

The demise of Quibi

Six months after its debut, Quibi — a streaming service that offered shows and movies in five- to 10-minute chunks — is shutting down. The company hinged on the idea that people would pay for expensively produced short-form content made specifically for their phones.

Much of Los Angeles seemed to be involved in its programming, including Steven Spielberg, LeBron James and Jennifer Lopez, and the company had raised nearly $1.8 billion. Yet Quibi’s trajectory is more likely to serve “as a case study at Harvard Business School on what not to do when launching a streaming service,” one analyst told The Times.

The pandemic is partially responsible. Since Quibi was intended for phones, programming initially couldn’t be watched on TV — a feature that became increasingly problematic when people were staying home.

But the company also didn’t seem to understand the needs of its extremely online audience. Users couldn’t take screenshots or share clips from Quibi’s shows at first, hindering its ability to generate interest on social media. “It provided no apparatus with which its content could go viral,” Adam Epstein wrote in Quartz. “No memes. No trending hashtags. It relied almost entirely on its own marketing to drive awareness.”

It also didn’t have a clear audience. Quibi wasn’t offering prestigious shows, as HBO does, or bingeable content, as Netflix does. It was competing for attention with free platforms like TikTok, which has arguably perfected the bite-size entertainment format. During a period when people’s screen time has spiked, Quibi still couldn’t capture their attention.

Stir-fried ground pork and green beans with a generous amount of ginger, garlic and chiles for this savory dish. It’s best served over rice or with rice noodles.

Here’s a step-by-step guide to creating your own herbal tea garden.

The pangram from yesterday’s Spelling Bee was magazine. Today’s puzzle is above — or you can play online if you have a Games subscription.

P.S. A haiku from a recent Times article (courtesy of the Twitter bot @nythaikus): “When the sun beats down,/students take shelter under/shades made from boat sails.”

Today’s episode of “The Daily” is about partisanship in American local news. The latest Book Review podcast features Ian McGuire and Elisabeth Egan. discusses the Irish history behind his new novel.