Good morning. The impeachment trial gets off to a rough start for Donald Trump. 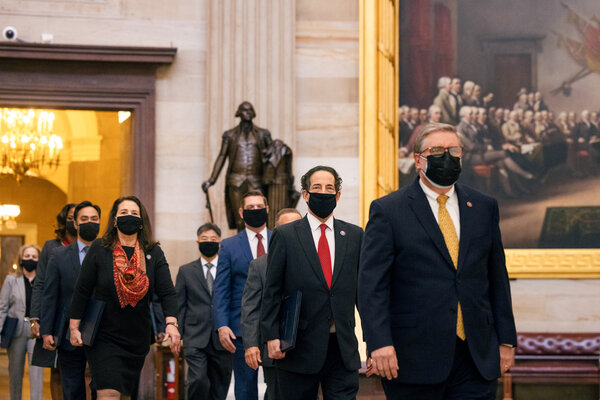 During the long debate over Donald Trump’s first impeachment, the share of Americans who favored removing him from office never rose above 50 percent. It hovered in a tight range around 47 percent, according to FiveThirtyEight’s polling average.

Trump’s second impeachment is different: Most Americans believe the Senate should convict Trump and disqualify him from holding office again, according to multiple polls.

In a CBS News poll released yesterday, 56 percent of respondents said they supported conviction. In an ABC/Ipsos poll, 56 percent said he should be convicted and barred from office. Gallup found people favoring conviction by a margin of 52 percent to 45 percent — which is close to the average of all recent polls.

In our deeply polarized country, even a narrow majority of public opinion is significant. It indicates that a meaningful number of people have crossed over to the other side of a debate. In the CBS poll, for example, 21 percent of Republican voters said they believed Trump had encouraged violence during the Jan. 6 attack on the Capitol. (A new Times video lays out the many lies he told about the election, feeding the crowd’s anger.)

The case against Trump

Yesterday was the opening day of the Senate’s impeachment trial, and the weakness of Trump’s case was on display.

Representative Jamie Raskin, the Maryland Democrat leading the prosecution, opened with a video montage showing both the Jan. 6 attack and Trump’s words during that day. (You can watch it here.) Raskin later delivered an impassioned argument recalling his own experience that day.

“All around me, people were calling their wives and their husbands, their loved ones to say goodbye,” Raskin said. “Senators, this cannot be our future. This cannot be the future of America. We cannot have presidents inciting and mobilizing mob violence against our government and our institutions because they refuse to accept the will of the people.”

Raskin and other Democratic managers also said that Trump’s lawyers were creating a dangerous precedent by arguing the trial was invalid because Trump was no longer in office. If that were true, the end of every president’s time in office would turn into a “January exception” when he would be immune from consequences for his actions.

Trump’s lawyers condemned the attack on the Capitol but said Democrats were pursuing impeachment out of partisan vengeance. And they argued that making a former president stand trial would establish the precedent for any former official to be punished at the whim of the party in power. “This is nothing less than the political weaponization of the impeachment process,” David Schoen, one of the former president’s lawyers, said.

But the performance of Trump’s lawyers received mostly dreadful reviews.

Trump himself was furious while watching the proceedings from Palm Beach, Fla., my colleague Maggie Haberman reported. And several of Trump’s Senate allies — including Ted Cruz and Lindsey Graham — criticized his lawyers’ case as ineffective.

Bill Cassidy, a Louisiana Republican, called the prosecutors’ case focused, organized and compelling. “President Trump’s team were disorganized,” Cassidy added. “They did everything they could but to talk about the question at hand, and when they talked about it, they kind of glided over it, almost as if they were embarrassed of their arguments.”

Carl Hulse, The Times’s chief Washington correspondent, noted that the Trump team’s strategy had changed from his last impeachment. “I haven’t heard either of the president’s lawyers say he did nothing wrong,” Carl wrote. “This is a process argument and the Trump team wants to stay away from what happened on Jan. 6 as much as possible.”

A conviction seems unlikely, largely because many Republican senators fear upsetting the majority of Republican voters who still support Trump. Only six Republican senators voted yesterday with Democrats to proceed with the trial. The remaining agreed with Trump’s lawyers that the Senate could not try a former president. Cassidy was the only senator to change his mind since a similar vote last month.

Still, the first day did not go well for Trump’s team. Most Americans believe that he incited a violent mob to attack Congress and that he should never hold office again. His lawyers didn’t do much to change that perception yesterday.

Coming up today: The House managers will begin making a more detailed case for convicting Trump, starting around noon Eastern.

After a visit to Wuhan, China, a W.H.O. official said it was “very unlikely” that the coronavirus had accidentally leaked from a laboratory. Some scientists worry that the agency has been too eager to accept Beijing’s narrative.

The F.D.A. approved a Covid-19 therapy by the drug maker Eli Lilly, giving doctors another option for patients who are at high risk of becoming seriously ill.

People with dementia have been twice as likely to get the virus, and much more likely to be hospitalized, than people the same age without dementia, a study found.

Employees of the software giant Salesforce will work remotely at least part-time after the pandemic, The Wall Street Journal reports, a sign of the virus’s lasting impact on corporate life.

Myanmar’s military has instituted a curfew and warned of crackdowns, but hundreds of thousands of people are still protesting last week’s coup.

Federal investigators faulted the pilot in the helicopter crash that killed Kobe Bryant and eight others in California last year.

German prosecutors charged a 100-year-old former guard at a Nazi concentration camp with assisting in thousands of murders there.

The Netherlands has temporarily halted adoptions from abroad after an investigation exposed past abuses, including child theft and trafficking.

The legal battle over who should control Britney Spears’s finances will continue in court this week. (For more, watch “Framing Britney Spears,” a Times documentary.)

A meteorologist lost his wallet in Antarctica in the 1960s. He just got it back.

KAWS-mania: In 2019, a painting featuring the cast of “The Simpsons” with X’s for eyes sold for $14.8 million. The sale marked the street artist KAWS’s ascent to studios and galleries.

From Opinion: Black history produces a bright light by which we can assess how well our nation’s actions align with its ideals, Jonathan Holloway, the president of Rutgers University, argues.

Why stars are flocking to podcasting

The latest celebrity to start a podcast? Paris Hilton, the media sensation from the early 2000s who helped shape today’s culture of reality TV and social media influencers. “I really believe that voice and audio is the next frontier,” Hilton told The Times.

It may seem surprising that stars like Hilton and Lowe are choosing a medium where a big part of their brand — their look — is irrelevant, but podcasts offer some big advantages to celebrities. Many are on a pandemic-induced break from filming, as one agent told Vanity Fair, and podcasting is “a Covid-safe medium.”

Podcasts also require a relatively small time commitment and allow for fast turnarounds. “We record it and then poof, pow, surprise! It’s in your earholes the next day,” the actor Adam DeVine, a co-host of “This Is Important,” told Vanity Fair.

The money isn’t bad, either: The biggest celebrities can command $1 million to $3 million to start an unscripted podcast. Scripted projects provide less money up front but have the potential to be turned into TV shows and films. Amazon has already bought the rights to adapt “Dirty Diana” into a series — starring Moore.

Birria, a stew from Mexico, is rich and satisfying. “The steamed meat isn’t just tender, but in places deliciously sticky, smudged with chile adobo, falling apart, barely even connected to the bone,” The Times’s Tejal Rao writes.

In “Halfway Home,” Reuben Jonathan Miller uses research and personal experience to write about incarceration and its lasting effects. Read the review.

What to (Quickly) Watch

The hosts discussed the impeachment trial.

The pangrams from yesterday’s Spelling Bee were kitchen, kitchenette and thicken. Here is today’s puzzle — or you can play online.

If you’re in the mood to play more, find all of our games here.

P.S. The 25th Amendment to the Constitution, which allows for the removal of an incapacitated president, was ratified 54 years ago today. The Times covered it on the front page.

Today’s episode of “The Daily” is about what it will take to reopen schools. The latest “Popcast” remembers musicians lost to the virus.