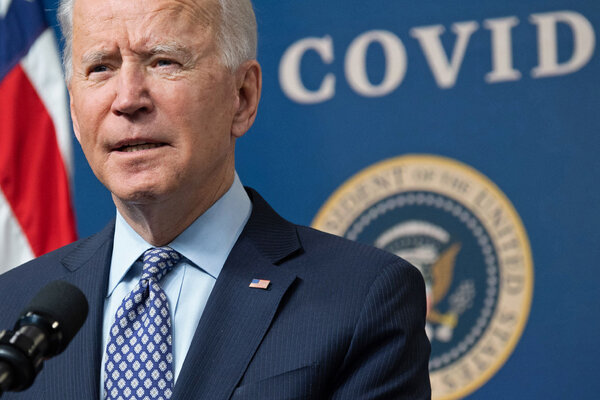 President Biden has compared the fight against Covid-19 to wartime mobilization. And successful wartime mobilization in the United States has always involved much more than the government. The best example is World War II, when private companies like Ford and General Motors quickly overhauled their operations to contribute to the war effort.

In the fight against Covid, however, the private sector — with the big exception of pharmaceutical companies — has done relatively little so far. It has not made a major push to persuade Americans to remain socially distant, wear masks or get vaccinated as soon as possible.

Later this morning, Biden administration officials and business leaders will announce a plan to change that, White House officials told me. The plan includes some of the country’s largest corporate lobbying groups — like the Chamber of Commerce, the Business Roundtable, the National Association of Manufacturers and groups representing Asian, Black and Latino executives — as well as some big-name companies.

Ford and The Gap will donate more than 100 million masks for free distribution. Pro sports leagues will help set aside more than 100 stadiums and arenas to become mass vaccination sites. Uber, PayPal and Walgreens will provide free rides for people to get to vaccination sites. Best Buy, Dollar General and Target will give their workers paid time off to get a shot. And the White House will urge many more companies to do likewise.

Many of the steps are fairly straightforward, even obvious. That they have not happened already is a reflection of the Trump administration’s disorganized Covid response. Trump officials oversaw a highly successful program to develop vaccines, but otherwise often failed to take basic measures that other countries did take.

The new push comes at an important moment in the pandemic. The country has a chance to crush the virus in the coming weeks, through a combination of vaccination, mask wearing and social distancing. Yet the spread of contagious new variants means that virus cases could surge instead, causing tens of thousands of unnecessary deaths.

In a worrisome sign, the number of new cases has stopped falling over the past week, in the U.S. and worldwide. We are now looking at the possibility of a fourth wave, as my colleague Apoorva Mandavilli explains in a new overview of the pandemic.

Private companies can play a big role in avoiding that new wave for two main reasons.

First, the companies have enormous resources at their disposal — buildings, technology and people for vaccination sites; money to spend on public-service messages; and more. A case study: Honeywell worked with local officials in North Carolina to deliver more than 1,500 vaccine shots per hour on two recent weekends.

Second, companies can sometimes break through partisan barriers that politicians cannot. Many Americans who won’t listen to Biden’s advice about mask wearing — or vaccine effectiveness — may listen to a colleague’s or boss’s advice. They may be willing to participate in a shared effort to protect their co-workers and community. Slavitt, the White House adviser, said he was hopeful that employers could make a particular difference in states that have not enacted mask mandates.

The message, he added, should be: “Wear a mask. Avoid crowds. And get vaccinated when it’s your turn.”

During our conversation, I asked Slavitt whether companies could not only influence people’s attitudes but also make a real difference in the speed at which Americans are vaccinated. The country has averaged about 1.5 million shots per day over the past week. My reporting suggests that the right goal is at least three million daily shots by April.

Slavitt didn’t sign on to that goal — “I don’t think we have a perfect answer to that question,” he said — but he didn’t reject it either. He noted that the peak number of flu vaccine shots in a normal year is around three million per day.

He also pointed out that Biden yesterday predicted that any adult who wanted a Covid vaccine would be able to get a shot within 60 to 90 days. That timetable suggests a pace of close to three million shots by early spring. And it will probably take private-sector efforts, like Honeywell’s, to make it happen.

Wartime metaphors are often overused. But in the case of Covid, it feels appropriate: People’s lives are at stake.

Biden ordered an airstrike in Syria, bombing a cluster of buildings that the Pentagon said belonged to Iran-backed militias responsible for a recent attack on American troops and contractors.

The House passed the Equality Act, which would extend civil rights protections to sexual orientation and gender identity. The bill is unlikely to pass the Senate.

Mitch McConnell said he would “absolutely” support Donald Trump if Trump becomes the party’s 2024 nominee, after calling him responsible for the Capitol riot.

The Army will allow female soldiers to wear ponytails and several other hairstyles in addition to the traditional tight bun — a response to the growing number of women, particularly Black women, in its ranks.

For the second time in a little more than a week gunmen abducted schoolchildren in Nigeria.

A Morning Read: In 1959, nine young hikers died in the Russian wilderness. Two scientists think they found an answer to what happened.

Modern Love: This husband and wife entered the world in the same maternity ward.

From Opinion: What are the biggest barriers to vaccine access where you live? Find out.

Lives Lived: In 1974, Rajie Cook’s design firm won a contract to develop symbols that could efficiently convey information in public places. The 34 pictographs Cook helped come up with — depicting bathrooms, train stations, airports and more — are still in use. Cook died at 90.

The Golden Globes’ scandals and influence

The Golden Globes — which will air on Sunday — are the third most-watched awards show, after the Academy Awards and the Grammys. The publicity of a Globe nomination or win often boosts the careers of less established creators and helps secure financing for future projects.

But the Globes are also known for making baffling choices, like nominating the horror film “Get Out” for best comedy or musical in 2018.

The nonprofit group that runs the awards — the Hollywood Foreign Press Association — has only 87 members, compared with more than 9,000 Academy Awards voters. Many of the 87 (none of whom are Black) write for obscure publications. As Cara Buckley and Matt Stevens write in The Times, the voters are “widely viewed as colorful, generally harmless, perhaps venal and not necessarily journalistically productive.”

The association has endured various scandals over the decades, often regarding its ethics. Celebrities and studios regularly court its members with lavish gifts. In 2019, more than 30 association members flew to France to see the set of the series “Emily in Paris,” and Paramount Network treated them to stays at a five-star hotel, The Los Angeles Times reported. The show, which critics panned, received two Golden Globe nominations this year.

By contrast, “I May Destroy You,” a critically acclaimed series starring Michaela Coel, received no nominations. A writer on “Emily in Paris” even wrote an op-ed saying her excitement was “tempered by my rage over Coel’s snub.”

A coat that starts at $1,000 has become a favorite of financiers and movie stars.

Which famous electronic music duo broke up this week? Take this week’s News Quiz, and compete with other Times readers.

The pangram from yesterday’s Spelling Bee was glamour. Here is today’s puzzle — or you can play online.

Thanks for spending part of your morning with The Times. See you Monday. — David

P.S. While working at Newsday and The New York Times, Jack Schwartz was “a masterly editor, learned and literary, with a twinkling sense of humor,” one former colleague recalled. Schwartz died of Covid complications at 82.

There’s no new episode of “The Daily” today. Instead, here’s the first episode of “Odessa,” a new Times podcast, about what happened when one Texas high school reopened during the pandemic.