The Republican Party’s big recent moves — the ouster of Liz Cheney from a leadership position and the passage of new state voting laws — do not have much immediate impact on Americans’ lives.

Cheney’s removal doesn’t change congressional Republicans’ approach to President Biden’s agenda, and the voting laws will mostly start to matter next year. With Biden in the White House, Democrats controlling Congress and many Americans still focused on Covid-19, internal Republican debates can sometimes feel like an exhausting partisan sideshow.

They are not. The last few months have the potential to be a turning point for the country because of what is happening inside the Republican Party.

I don’t say that lightly. Readers of this newsletter know that I don’t believe any political ideology has a monopoly on truth. Democrats have their own problems, including an elitist intolerance for debate about some subjects and a set of Covid fears that are at times disconnected from scientific evidence. But the issues inside the Republican Party — involving its attitude toward democracy — are of a different order of magnitude.

In a defiant speech from the House floor before her ouster, Cheney said, “I will not sit back and watch in silence while others lead our party down a path that abandons the rule of law.”

It’s worth stepping back for a minute to think about what has happened since November.

After losing an election, many Republican leaders spread the lie that their opponent had cheated. On its own, this lie resembled the historical tactics of authoritarians, who often try to delegitimize any political party but their own. The similarity became starker when multiple elected Republicans either encouraged or excused a mob that violently attacked the U.S. Capitol.

A peaceful transfer of power involves both the peaceful part and a willing transfer. It depends on the ability to acknowledge defeat. Never before have so many elected members of Congress from one party tried to disrupt a clear victory by the other party.

At first, that Jan. 6 attack seemed as if it might cause party leaders, like Senator Mitch McConnell, to reassert the importance of democratic principles. Instead, Republicans who called out Donald Trump’s falsehoods found themselves marginalized. The central message of Cheney’s ouster is that Republicans must lie, or quietly endorse Trump’s “big lie,” to remain Republicans in good standing.

The same thing is happening in state Republican parties. In Virginia this week, Glenn Youngkin won the Republican nomination for governor. By résumé, he is a country-club Republican, having served as co-C.E.O. at the Carlyle Group, a well-connected investment firm. To win the nomination, though, Youngkin evidently decided that he needed to promote false conspiracy theories. So he did.

In more than 10 states, including Texas, Florida, Georgia and Arizona, Republican lawmakers have responded to Trump’s defeat by moving to make voting more difficult. It’s true that some of these measures are defensible on other grounds and others may have less impact than Democrats claim. But the intent of the laws is clear, and they will surely have some effect.

Provisions that target heavily Democratic areas — like Georgia’s limits on drop boxes — are particularly blatant. “The typical response by a losing party in a functioning democracy is that they alter their platform to make it more appealing,” Kenneth Mayer, a political scientist at the University of Wisconsin, has told The Times. “Here the response is to try to keep people from voting. It’s dangerously antidemocratic.”

A few states have also given state legislators more power over election administrators, potentially making it easier for politicians to reject an election’s result. These provisions may be even more dangerous than the hurdles to voting, especially since they are an explicit response to Trump’s big lie, as Joshua Douglas of the University of Kentucky has written.

Could all of these moves come to little, much as Trump’s postelection flailing did? Yes, that’s one possible outcome. But it is not the only one. In a way that would have been unfathomable a few years ago, one of the country’s two major parties is taking steps that would allow it to overturn the outcome of a future election. 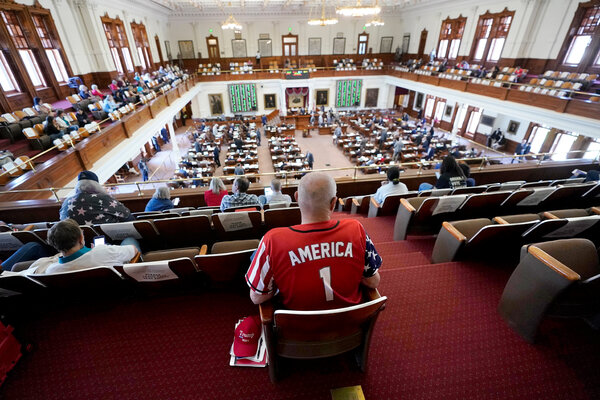 For Republicans, the question is whether they are willing to break with their own party, or at least criticize it honestly, to speak up for democracy. That’s not an easy thing to do. There are many Americans who believe in both democracy and a conservative agenda — less regulation, strict abortion laws, few gun restrictions, tight border security, strong support for police departments and churches. These Americans no longer have a comfortable partisan home.

If even a small portion of Republicans insist that the party supports democracy, they can succeed. As several experts have pointed out — including Anne Applebaum, Steven Levitsky and Daniel Ziblatt — the most successful strategy for beating back a political party’s authoritarian shift has depended on defections among people who otherwise agree with that party. That’s why Cheney, Jeff Flake, Mitt Romney and other Republicans criticizing Trump’s big lie are significant.

The same experts advise Democrats to welcome the courage of those Republicans and not obsess over their many other disagreements. Cheney’s stance matters because she is a pro-gun, anti-abortion, anti-regulation, deeply conservative Republican.

“The Republican Party is sliding into authoritarianism at a terrifyingly rapid clip,” Jonathan Chait has written in New York magazine. “That fate of American democracy is the biggest issue in American politics.”

The ouster of Cheney may embolden her and allow “a household-name conservative to take her case against Trumpism far beyond a Capitol conference room,” The Times’s Jonathan Martin writes.

The fighting between Israelis and Palestinians has spread to the streets.

Israel continued airstrikes on the Gaza Strip, and Hamas sent rockets into Israel. The attacks have killed more than 67 Palestinians and seven Israelis. Here are the latest updates.

“The sound was very, very horrific.” Read about the scene in Gaza.

The crisis comes at a pivotal moment in Israeli politics.

States can now offer the Pfizer vaccine to 12- to 15-year-olds.

Gov. Mike DeWine of Ohio said the state would give five people $1 million each for getting vaccinated.

Randi Weingarten, a top teachers’ union official, will call for schools to reopen fully this fall. (Related: A Times Magazine story on students’ struggles during an isolated and dire year.)

Virus resources: It takes 60 days to prepare a dose of the Pfizer vaccine. See how it’s made.

After a pipeline shutdown in the South, drivers rushed to the pump, fearing and then causing a shortage. The company that runs the pipeline said supplies would flow again in coming days.

More than 130 U.S. officials serving overseas have reported mysterious brain ailments over the past five years. The C.I.A. is investigating.

Colombia’s police force is cracking down on protesters, and igniting a wider demonstration movement.

America is having a Black Renaissance, Perry Bacon Jr. writes in his debut Washington Post column.

In The Times, Gail Collins, Ezra Klein and Nicholas Kristof have columns.

What is a summit? Only 44 people have reached the top of all of the world’s highest mountains. Or maybe no one has.

Morning music: Start your day with the uplifting sounds of a Harlem choir.

Domestic life: Inside the marriage of Glennon Doyle and Abby Wambach.

A Times classic: Explore almost every building in the U.S.

Lives Lived: Norman Lloyd’s entertainment career began in the 1930s and lasted into the 21st century. Orson Welles and Alfred Hitchcock directed him, and he worked with Charles Chaplin, Bertolt Brecht and Jean Renoir. Lloyd died at 106.

How to handle the return of socializing

Philip Galanes writes a Times column called Social Q’s, and he frequently gets a version of the question: How can I deal with the tensions around the resumption of social life? Many people are ready to return to prepandemic activities, while others are not.

Philip’s main advice: “Be nice to yourself, take care of the people you love and be as compassionate as you can.” That includes being honest about disagreements — and doing so in person or by phone rather than text.

And it’s OK to take it easy. As the author Celeste Headlee told NPR, “We have been under such a cognitive load over the past year or so that there just may not be the space for two things in one day.” — Claire Moses, a Morning writer

Related: “The lifting of pandemic restrictions represents a good opportunity to re-evaluate and make changes,” our colleague Tara Parker-Pope says. The Times has created a 10-Day Fresh Start Challenge, based on the science of beginnings.

Here are the best Times recipes for chocolate chip cookies, including one adapted from Jacques Torres.

Sarah Schulman’s book “Let the Record Show” is a history of Act Up, the AIDS protest group. “This is a tactician’s bible,” Parul Sehgal writes in a review.

Roger Federer shares his favorite places in his home country of Switzerland.

The hosts talked about Cheney’s ouster.

The pangram from yesterday’s Spelling Bee was jackpot. Here is today’s puzzle — or you can play online.

P.S. Amanda Morris will join The Times as a fellow covering disability issues.

“The Daily” is about the Israeli-Palestinian crisis. On the Modern Love podcast, why do people get married?