We’re covering the tough road ahead for Israel’s new coalition and Covid vaccine donations ramping up for countries that have been left out. 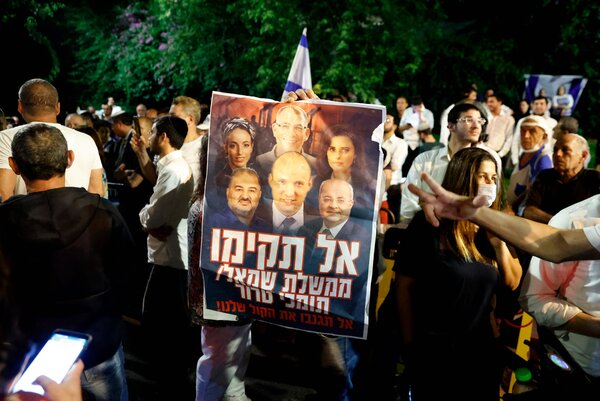 Netanyahu vows to fight deal to oust him

After his rivals reached an agreement on forming a new government in Israel, Prime Minister Benjamin Netanyahu signaled that he would not go down without a struggle. He called the proposed new diverse coalition that would oust him a “dangerous, left-wing government.”

Netanyahu began an all-out campaign against the coalition of opposition parties, listing concessions that he claimed Yair Lapid and Naftali Bennett had made to secure an alliance with Raam, the Arab party, and other parties.

A bitter fight was expected in the coming days. Netanyahu’s party was aiming to pile pressure on members of the coalition to push them to abandon the new alliance.

Reactions: The far right saw the coalition as a betrayal. Some centrists saw it as a relief. Israel’s Palestinian minority expressed a mix of indignation about Bennett’s opposition to a Palestinian state, and relief that Netanyahu was gone.

What’s next: The fragile coalition of disparate political parties could unravel before Parliament meets to ratify the government. Netanyahu’s party can use parliamentary procedure to delay the confidence vote until June 14. The longer it takes, the greater the chance the coalition could fracture.

The U.S. plans to send 25 million shots to the world

Under pressure to share some of the huge U.S. supply of Covid vaccines, the White House announced that it would distribute 25 million doses this month across a range of countries in Asia, Latin America, Africa and the Middle East.

It’s the first batch of a total of 80 million doses that President Biden has promised to send abroad by the end of June. Three quarters of those will be given to the international vaccine effort known as Covax. The rest will be reserved to help with virus surges, including in India and Iraq as well as the West Bank and Gaza.

Context: The announcement comes a week before Biden leaves for Cornwall, England, to meet with world leaders at the annual Group of 7 summit, where the global vaccine supply is certain to be a topic of discussion.

About 10,000 of the 80,000 volunteers for the Tokyo Olympics have quit amid rising coronavirus worries.

Hong Kong is dangling incentives like brand-new apartments and paid leave for the vaccinated, but it may not be enough.

Afghan and U.S. health officials have issued health warnings after alarming spikes in virus cases in Afghanistan, which is facing a third wave of infections.

A clash at Facebook over the response to India and Israel

Discontent at Facebook has surged over its handling of international affairs in recent weeks, according to interviews with more than half a dozen current and former employees.

Employees have complained about the company’s decisions to take down posts from prominent Palestinian activists when clashes broke out in Israel and messages critical of the Indian government’s handling of the coronavirus pandemic.

The workers have grilled top executives at meetings and formed a group to internally report Palestinian content that they believed Facebook had wrongly removed. More than 200 employees signed an open letter calling for a third-party audit of Facebook’s treatment of Arab and Muslim posts.

Quotable: “There’s a feeling among people at Facebook that this is a systematic approach, one which favors strong government leaders over the principles of doing what is right and correct,” said Facebook’s former head of policy for the Middle East and North Africa region, who left in 2017.

China suspended all ultramarathons and long-distance races after 21 runners died in a storm during a mountain race. Some of the relatives are quietly asking whether their loved ones could have been saved.

Thousands of Hong Kong police officers were on standby for the anniversary of the Tiananmen Square massacre after the authorities banned vigils to honor the victims of the pro-democracy protest in 1989.

Denmark’s Parliament passed a law allowing the nation to relocate asylum seekers to countries outside Europe, the latest in a series of hard-line measures there to discourage migration.

Ashleigh Barty, the No. 1-ranked player in women’s tennis, is out of the French Open after aggravating a left hip injury during her second-round match with Magda Linette on Thursday.

Queen Elizabeth II said she planned to meet with President Biden during his visit to Europe this month.

Sean Penn is a contender this year for the top prize at the Cannes Film Festival, up against a host of other headliners including Wes Anderson and Asghar Farhadi, the organizers announced.

A herd of 15 elephants has been lumbering its way across China for more than a year, traveling more than 300 miles. They have trotted down streets, past gawking residents, and devoured truckloads of corn and pineapples left out for them by government officials. It’s the farthest-known movement of elephants in China. Where they’ll go next, no one knows. Researchers are mystified.

A chef on the cookbook that changed her life

The chef and restaurateur Alice Waters, whose new book is “We Are What We Eat,” spoke to our Book Review.

What book, if any, most influenced your approach to food?

I got Elizabeth David’s “French Country Cooking” in my early 20s, shortly after I came back from studying in France in 1965. When I returned home to Berkeley, all I wanted to do was live like the French. It’s a big cultural picture that Elizabeth David presents in her books; it’s not simply about food.

The last book you read that made you cry?

The last book you read that made you furious?

Marion Nestle’s “Unsavory Truth: How Food Companies Skew the Science of What We Eat.” That made me absolutely furious. The title of the book says it all. And I’m so grateful to Marion for telling the truth. We need her book more than ever right now.

What to Listen To

These five classical album releases feature a fresh take on big-band music and a pivotal year in Mozart’s career.

Get into rain gardens, which are beautiful and effective at managing storm water.

Here’s today’s Mini Crossword, and a clue: Unused, as a bedroom (five letters).

P.S. “The Daily” has been nominated for best international podcast at the British Podcast Awards.

The latest episode of “The Daily” is about the ultraconservative Texas Legislature.

You can reach Melina and the team at [email protected].