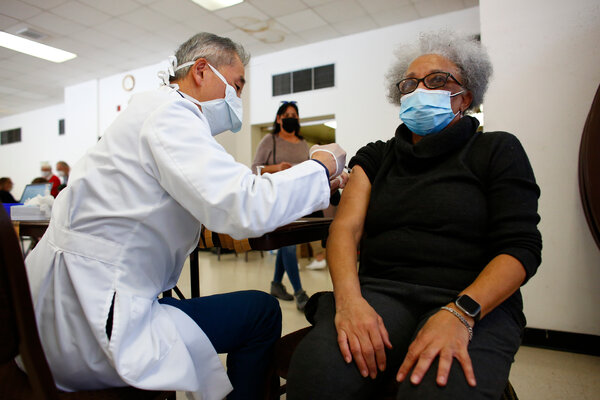 A U.S. government advisory panel has recommended booster shots of the Pfizer-BioNTech Covid vaccine for adults over 65, for people ages 18 to 64 with underlying conditions and for residents of long-term-care homes, but it declined to endorse additional doses for workers who might have higher exposure on the job.

The White House is likely to begin promoting and rolling out a plan for booster shots as soon as today, in keeping with the administration’s intention to begin offering the additional doses this week. In one recent poll, about three-quarters of vaccinated Americans said they would opt for a booster if the doses were available.

Boosters for Moderna and Johnson & Johnson vaccine recipients weren’t up for debate before the panel. The Food and Drug Administration is reviewing data for a Moderna booster, but it has not received an application from Johnson & Johnson. Several experts supported a mix-and-match strategy and signaled that they would revisit the issue as new data emerged.

Analysis: For adults over 80, there’s strong support for booster shots to prevent severe diseases and hospitalization, our reporter Apoorva Mandavilli says. “They’re at high risk, and their immunity isn’t great to begin with and falls off quickly,” she said. It’s less clear for younger people, she added. “There, the data is not yet showing a drop-off.”

In Ask Well, our columnist answers this question: Will your mask protect you if no one else is wearing one?

Alaska is now in the throes of its worst coronavirus surge as the Delta variant rips through the state, swamping hospitals with patients.

Boris Johnson, the British prime minister, made headlines this week while visiting the U.S., variously telling the world to grow up and accept the challenge of climate change; making fun of France’s neuralgic response to a U.S.-Australia-Britain submarine deal; and even clearing up lingering confusion about how many children he has (six).

A journalist-turned-politician, Johnson has long employed humor, often at his own expense, to make serious points. But it is unclear how well that lighthearted style advances Britain’s post-Brexit position on the global stage. “The problem with being a comedy act is that you’re then not taken seriously,” one British observer said. “That’s why we weren’t consulted on Afghanistan.”

Britain has yet to make progress on a trade deal with the U.S., one of the main selling points of Brexit. President Biden has also made it clear that he would object to any British actions that threaten the peace in Northern Ireland, such as its vows to overhaul its post-Brexit trading arrangements there.

Submarine alliance: The deal is a bright spot in the trans-Atlantic relationship, making Britain a key American ally in the geopolitical contest with China. But in France, the collapse of its own arrangement with Australia has raised questions about a potential discrepancy between France’s vision of its role in the world and its actual power.

Biden’s foreign policy: Recent moves by the U.S. president have led to complaints that his approach echoes his predecessor’s.

A wave of Boko Haram defections

As many as 7,000 fighters for the shadowy Boko Haram terrorist group in Nigeria, along with their family members, have defected since the death of the group’s leader. They’ve since been relocated to a compound in Maiduguri, a city they once terrorized, and nearby residents are fearful.

However weakened Boko Haram may be, it does not necessarily mean the militant threat has ended for the people of northeastern Nigeria. Fighters from a rival splinter group — the Islamic State West Africa Province, or ISWAP — are moving into the vacuum left by the organization, bringing truckloads of military equipment with them.

Six former Boko Haram members spoke to The Times on condition of anonymity. Most described having surrendered largely for practical reasons — because they were tired of living in the bush, for instance, or because they felt the choice was between giving up to the government or going over to the ISWAP, where they feared being treated as slaves.

Defections: Though hundreds of Boko Haram members have previously gone through Nigeria’s deradicalization program, Operation Safe Corridor, never before have thousands surrendered, as they have now.

First person: A former top Boko Haram commander described seeing Abubakar Shekau, the group’s longtime leader, self-detonate when he was ambushed at his stronghold in the Sambisa forest. “It was devastating,” he said. “Sambisa was silent. Not even the sound of the flour grinder. The whole place was in mourning.”

The U.S. diplomat who oversees Haiti policy has resigned, submitting a letter to the State Department that criticized the Biden administration’s “inhumane, counterproductive decision” to deport Haitian migrants, above.

The House overwhelmingly approved $1 billion in funding for Israel’s Iron Dome missile defense system after a bitter debate among Democrats.

Federal regulators are racing to put in effect the first major rules on cryptocurrency to reduce the risk to consumers and the markets. Their initial target is a fast-growing product called stablecoin.

Carles Puigdemont, the former separatist leader of Spain’s Catalonia region, was arrested by the Italian police last night on the island of Sardinia on charges of sedition.

The E.U. unveiled plans to require a single, standardized phone charger across the bloc, an initiative that is likely to hit Apple hard.

After decades of broken promises, the Italian government has allocated 100 million euros to improve housing in Messina, Sicily, where thousands have lived in squalor since an earthquake in 1908.

Uyghurs in Afghanistan were protected for years by the U.S. presence there. Now, as the Taliban cozies up to Beijing, they fear they will be sent to China as part of a deal for economic aid.

The fate of a 6-year-old boy who was the sole survivor of a cable-car accident in Italy is being decided by an Israeli court, in an international custody battle that has drawn world attention.

This week, The Times Magazine publishes its annual Voyages issue, in which writers and photographers capture snapshots of life from around the world, from Kyiv, above, to Las Vegas. Take a trip with us.

For the first time, a Black composer at the Met

In its 138 years, the Metropolitan Opera, the largest performing arts institution in the U.S., has put on about 300 titles. Not one has been by a Black composer — until now.

Closed for a year and a half because of the pandemic, the company will reopen on Monday with “Fire Shut Up in My Bones” by Terence Blanchard, a jazz trumpeter and composer best known for scoring Spike Lee films.

“The Black Lives Matter movement had a big impact, at a time when theaters and opera companies were being looked at under a microscope in terms of their sense of social responsibility,” Peter Gelb, the Met’s general manager, told Zachary Woolfe, The Times’s classical music editor. “It felt like it was important for the Met to respond.”

“There’s a whole sense of disbelief,” Blanchard recalled of his call with Gelb. “Is this really happening? Is this how this happens? Just that quick? I get a phone call, and then my opera’s going to the Met?”

“Fire” is an unabashedly emotive tale of family troubles, sexual abuse, self-discovery and self-acceptance, which at once echoes Puccini and Bizet, even as it recalls the savvily sturdy mid-20th-century work of Robert Ward, Douglas Moore and Carlisle Floyd.

Read more about the opera here. And listen to more highlights from Blanchard’s oeuvre.

A good corn soup is creamy and sweet; a better corn soup is spicy, refreshing and addictive. Don’t skimp on garnishes for extra heat or crunch.

The film “In Balanchine’s Classroom,” about the choreographer George Balanchine, is “both enthralling and heartbreaking,” our reviewer writes.

“The Sleeping Beauties,” by the neurologist Suzanne O’Sullivan, looks at mysterious illnesses in which groups of people suddenly fall into coma-like states.

And here is the Spelling Bee.

That’s it for today’s briefing. Have a peaceful weekend. — Natasha

P.S. The latest episode in our virtual event series on climate change, Netting Zero, will look at international freight and solutions to reduce the industry’s emissions. You can sign up here.

The latest episode of “The Daily” is on gerrymandering in New York State.