We’re covering the struggle to change behaviors around the virus in parts of India, strikes over a jobs law in Indonesia and Manila’s ban on daytime karaoke. 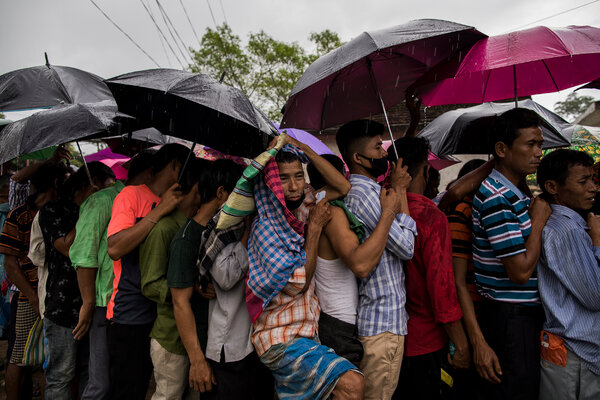 A rural surge of the virus in India

In megacities like Mumbai and Delhi where the virus first surged, public awareness campaigns left the populace more prepared and careful.

But many Indian villagers believe the government is overstating the severity of the pandemic and showing no sensitivity to the hardships they are suffering. The ones who do follow the rules face harrowing experiences at hospitals and social stigma in their towns.

On the ground: Our reporters visited more than a dozen rural areas, from Tamil Nadu to West Bengal, to Tripura, Bihar and Uttar Pradesh. People afraid to lose income in quarantine are refusing to be tested, they found, and few people are wearing masks or social distancing. Even police officers empowered to enforce the rules are sometimes not wearing masks. Hospitals are growing strained.

A Hong Kong health official said Thursday that the city was considering options for mandatory testing as it prepared for a new wave of coronavirus infections.

‘They are killing us’: Fury over job law in Indonesia

Riot police officers fired tear gas and water cannons in Indonesia’s capital on Thursday as they tried to disperse large crowds protesting a sweeping new law that slashes protections for workers and the environment.

Tens of thousands of workers took part in the third day of a national strike against the law, which the government hoped would draw investment. Critics say it benefits the elite by allowing companies to cut workers’ pay, eliminate days off and hire contract workers. It also cuts paid maternity leave, which could be devastating for working women.

Parliament passed the law on Monday, and protesters are urging President Joko Widodo not to sign it. If he does, the union said it would go to court.

Quotable: “The president is paying back the financiers who helped him win the election, not ordinary people who voted for him,” said a woman leading a factory strike in East Java. “They are killing us with the omnibus law.”

After years of building its global power and self-proclaimed sphere of influence, Russia is losing sway in its “near abroad.”

Uprisings in Belarus and Kyrgyzstan and a war in the Caucasus region have blindsided the Kremlin, undermining President Vladimir Putin’s image as a tactician on the world stage and leaving Russia scrambling to shore up its interests in the former Soviet republics.

Throughline: Russia and its neighbors have been destabilized by the coronavirus pandemic, which has exposed distrust in institutions and in out-of-touch leaders across the region.

Quotable: “There is nothing good about these conflicts for Moscow,” a senior Russian lawmaker and Putin ally told The Times.

The many sides of Novak Djokovic

The French Open is moving into its final weekend, and the eyes of the tennis world are on the No. 1 seed, Novak Djokovic, who is searching for absolution to end a year in which he drew attention for questioning vaccines, contracting the coronavirus at a poorly organized event and losing his temper enough to get disqualified at the United States Open.

Where Roger Federer and Rafael Nadal are private and controlled, Djokovic is an emotional exhibitionist, our reporter writes in this profile of a rare modern athlete who allows people to see large parts of his persona.

U.S. debates: The second presidential debate may be delayed by a week as organizers seek a way to hold a safe event in light of President Trump’s infection with the coronavirus. Separately, we have takeaways, a fact-check and an analysis of the vice-presidential debate.

Hong Kong heist: One man was charged on Thursday in the theft of $645 million in artifacts from an apartment while the owner was in mainland China. The thieves left by taxi after stealing coins, vintage stamps and calligraphy scrolls said to have been written by Mao Zedong. One of the recovered scrolls had been cut in two.

Snapshot: Above, students in the Philippines attending class from home. Manila’s mayor banned the daytime use of “karaokes, videokes and other sound producing devices” after complaints from irate parents home-schooling their children.

In memoriam: Jim Dwyer, 63, our Pulitzer Prize-winning Times colleague who wrote about the human stories of New York for decades. He died of complications of lung cancer.

What we’re reading: Jim’s last column for The Times, about the pandemic. “In times to come, when we are all gone,” he wrote in May, “people not yet born will walk in the sunshine of their own days because of what women and men did at this hour to feed the sick, to heal and to comfort.”

Deal: If you’ve had trouble sleeping during the pandemic, you’re not the only one. Several recent studies shed light on sleepers’ preoccupations.

Read: “What Were We Thinking” by Carlos Lozada, and “Trump on Trial” by Kevin Sullivan and Mary Jordan offer an intellectual history on President Trump.

At Home has our full collection of ideas on what to read, cook, watch and do while staying safe at home.

The golden age of newsletters

If your inbox is overflowing with analyses, briefings and carefully curated personal missives, you’d be forgiven for thinking we’ve reached peak newsletter.

Throughout the pandemic, more than 30,000 journalists have been laid off or furloughed or have had their pay reduced. Many have since found their niche on Substack, a newsletter service that allows people to create and send newsletters. The most successful of these — like Sinocism, from the China expert Bill Bishop, or Popular Information, from the liberal political writer Judd Legum — earn their authors six-figure salaries.

But, as this Wired story by the writer Michael Waters explores, journalists have long fled the constraints of traditional media for the unchecked liberty of their own newsletters. “In the 1930s, as today, the shift to newsletters arose amidst a crisis of confidence in the newspaper industry and was enabled by the spread of new technology,” he writes. “Now, regular people could become their own publishers for a one-time cost of just $50 to $100 — equivalent to about $500 to $1,000 in today’s dollars.”

And it hasn’t just been journalists.

In the 1970s, conservative activists like Ayn Rand and Phyllis Schlafly produced their own successful periodicals. More recently, writers such as Daniel M. Lavery, who writes The Shatner Chatner, or the essayist Charlotte Shane of the cult hit Prostitute Laundry have used the format to tell stories you’d never find inside a broadsheet.

The content is at the behest of the writer, and those prepared to pay for it. “It’s mostly personal journalism — a place where the individual can be his own boss, free from worries about advertisers or money-managing publishers,” one newsletter editor said, in 1979. “Some of us call it the Fourth and a Half Estate.”

Thank you
To Ali Slagle for the recipe, and to Theodore Kim and Jahaan Singh for the rest of the break from the news. Natasha Frost, on the Briefings team, wrote today’s Back Story. You can reach the team at [email protected]

P.S.
• We’re listening to “The Daily.” Our latest episode is about the vice-presidential debate.
• Here’s our Mini Crossword, and a clue: Excuse for a suspect (five letters). You can find all our puzzles here.
• The New York Times Company’s advertising team unveiled Pivotal, a new platform that draws on audience data and extensive research to offer marketers deep consumer insight.