China tackles an outbreak in Kashgar.

We’re covering a coronavirus outbreak in the Chinese city of Kashgar, the new asylum seekers from Hong Kong and President Trump’s push to energize his base in the final sprint of the campaign. 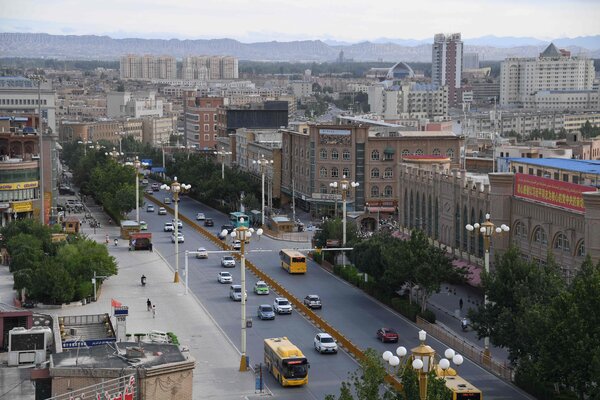 The authorities in China have ordered widespread testing and travel restrictions for the city of Kashgar in the country’s far west after a single asymptomatic case of coronavirus was detected on Saturday. By Sunday afternoon, 137 asymptomatic cases had been discovered.

A 17-year-old girl in a rural area outside Kashgar was found to be infected during regular testing, which set off mass testing. All the other cases found are connected to a factory where her parents work.

The Xinjiang region, which includes Kashgar, was under various lockdowns in February and March and again in July and August. Until Saturday, the region had not reported a new case since mid-August. The outbreak of the virus there early this year prompted concerns that it could spread in the vast network of camps and prisons where hundreds of thousands of ethnic Uighurs and other Muslim minorities have been detained.

On Sunday, Spain returned to a state of emergency and imposed a nightly curfew, and Italy tightened restrictions, ordering early closures of bars and restaurants and the total closure of gyms, swimming pools, theaters, cinemas and concert halls.

At least three top aides to Vice President Mike Pence have tested positive for the coronavirus in the past few days. The test results raise fresh questions about the safety protocols at the White House, where masks are not routinely worn, and Mr. Pence’s decision to remain on the campaign trail despite being exposed to the virus.

Six American states reported their highest-ever infection totals on Saturday and more than 78,000 new cases had been announced, one day after the country shattered its single-day record with more than 85,000 new cases.

The governor of India’s central bank, Shaktikanta Das, said on Sunday that he had tested positive for the coronavirus. “Asymptomatic,” he wrote on Twitter. “Feeling very much alright.”

Activists are fleeing Hong Kong, a haven no more

For decades, Hong Kong had been a place of shelter for people escaping war, famine and political oppression in mainland China. But the city has profoundly changed since China imposed a tough new security law this summer.

In recent weeks, Hong Kong activists have been granted asylum in the U.S., Canada and Germany, the latest catalyst for deteriorating relations between China and the West.

U.S. moves: The Trump administration has listed refugees from the city as a priority, even as it reduced the total number of refugees the U.S. will take in annually. At least three bills now before Congress would enact greater protections for people fleeing Hong Kong for the U.S. And the government has moved unusually quickly to grant asylum to at least two protesters who left Hong Kong late last year.

China’s response: Beijing and the Hong Kong government have dismissed the notion that the city’s residents might need shelter from oppression. Hong Kong’s No. 2 leader, Matthew Cheung, complained that Germany’s grant of asylum last week to a university student wanted on a rioting charge would “only send a plainly wrong message to criminals.”

A shift on conscription in South Korea

Today, for the first time, a group of conscientious objectors in South Korea will begin to perform alternative service. For the next three years, these 64 men will be in prison, working at jobs like cook and janitor, but they will have no criminal record.

Alternative service is a seismic shift in South Korea, where military duty is considered a rite of passage for young men and more conscientious objectors have been jailed than in any other country. For decades, hundreds, almost all Jehovah’s Witnesses, were put behind bars annually, usually for 18 months.

More exemptions? The question of who should be excused from military service has long been a sensitive topic. Top athletes have long been excused on the grounds that they enhance national prestige. A senior lawmaker has floated the idea that K-pop stars, like members of the band BTS, should also be exempted.

A Russian election that didn’t go as planned

Elections in Russia can be a cynical affair, with incumbents often running against no-name candidates to create the illusion of democracy. So when the mayor of the tiny village of Povalikhino, about 300 miles east of Moscow, asked the woman who cleaned City Hall to run, he thought his second term was all but assured. It wasn’t.

Our reporter looks at the new mayor, Marina Udgodskaya, above, and an episode of Russia’s managed elections gone awry.

Lee Kun-hee: The Samsung titan who was twice pardoned for white-collar crimes died on Sunday in Seoul. He was 78 and had been incapacitated since a heart attack in 2014. Mr. Lee pushed the company relentlessly up the technological ladder, turning Samsung into a cornerstone of South Korea’s economy.

First African-American cardinal: Pope Francis on Sunday elevated Wilton Gregory, the archbishop of Washington and an architect of the U.S. Roman Catholic Church’s zero-tolerance policy in response to its clerical sexual abuse crisis.

Kabul attack: At least 24 people were killed and 57 wounded in an attack on a tutoring center on Saturday, puncturing a relatively peaceful period in the Afghan capital. The interior ministry said the attack was carried out by a suicide bomber on foot who detonated his explosives at the entrance.

Snapshot: Above, President Trump at a campaign rally on Sunday in Londonderry, N.H. In this final sprint of the campaign, Mr. Trump is holding up to three rallies a day to try to energize his base as polls show he is trailing behind Joe Biden.

What we’re listening to: This Radio New Zealand podcast on New Zealand’s role in international espionage. Natasha Frost, who writes the Europe briefing, says, “It’s a must-listen, no matter where in the world you are.”

Cook: Dolloped with whipped cream or ice cream, this maple-pecan galette with fresh ginger is a sophisticated dessert with lots of crispy crust.

Read: If you’ve never read an Agatha Christie novels, here’s a guide to these comfort books, as our reviewer describes them. She writes: “There’s something soothing about the familiar formula. You know there will be at least one murder and quite possibly more.”

Do: Curious about hydroponic gardening? Here’s how to reap a lot of produce without so much as getting your hands dirty.

Discover more new and different projects in our At Home collection on what to read, cook, watch and do while staying safe at home.

The impact of unemployment in America

Twenty-two million jobs were lost in March and April in the U.S. because of the coronavirus pandemic. That’s as many as the total in the Great Depression and Great Recession combined.

Our special series “Out of Work in America” tells the stories of unemployed Americans in their own words. For this project, The Times’s National desk collaborated with 11 local news organizations in the U.S. Here’s what Jia Lynn Yang, a deputy editor on the National desk, and Clinton Cargill, an assistant editor, said about these accounts from a dozen people.

The National Desk has more than 40 reporters scattered across the country, but over the last year, Marc Lacey, the National editor, has prioritized partnerships with local news organizations, as with this project.

Clinton: Local news organizations have a special authority in the communities they cover. They know the big employers, the community groups, the state and local policies that make all the difference for people seeking unemployment. We thought they could bring some of that depth at the individual scale.

With more than 12 million people unemployed in the nation, why did local reporters return to the same dozen — often over a few months — at different stages?

Jia Lynn: The idea was to capture not just one snapshot but to do more sustained work tracking a person’s highs and lows. For anyone who’s ever lost a job, it can be such a grueling emotional experience, with very bad days followed by a day where everything turns up for you. We wanted to show that larger arc, and maybe stick around with some long enough that they actually found a job.

What do you hope readers get from this project?

P.S.
• We’re listening to “The Daily.” Our latest episode is on the final U.S. presidential debate.
• Here’s our Mini Crossword, and a clue: The Olympics logo has five (five letters). You can find all our puzzles here.
• The Times has launched its own widget for breaking news for iOS 14 on the iPhone.