U.S. election special: A tighter race than many expected.

Today we’re bringing you a special edition of the Briefing, with everything you need to know about the U.S. election. We’re delving deep into the results, what we know so far and what’s still to come.

(Need election counterprogramming, or a break from the noise? These quarantine soundscapes are a soothing alternative, as is this live feed of an albatross nest near Dunedin, New Zealand.)

Votes are still being counted. Catch up with the latest from the presidential and Senate races. 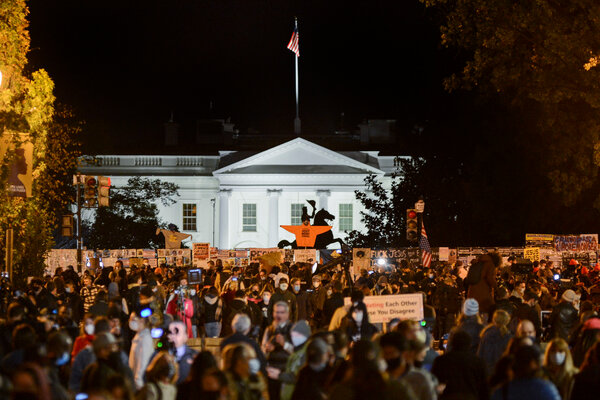 As results trickled in from around the country, some of the most hotly contested states in the presidential election remained too close to call hours after polls closed. With President Trump winning Florida and holding off former Vice President Joseph R. Biden Jr. in Georgia and North Carolina, Democratic dreams of a “blue wave” were dwindling. But Mr. Biden said, “It ain’t over until every ballot is counted.”

Exit polls showed voters preoccupied with the coronavirus and its effects on the economy. Those most concerned about rising infections sided with Mr. Biden, while people who primarily wanted the economy open went for Mr. Trump.

The Senate: As Democrats aimed to increase their majority in the House, the two parties grappled for advantage in the fight for the Senate. Democrats entered the night with 47 Senate seats, needing a net gain of four to retake control of the chamber (or three if the vice president, who breaks ties, is a Democrat).

In Kentucky, Mitch McConnell, the Senate majority leader, was elected to a seventh term, defeating the Democrat Amy McGrath, who struggled to gain ground despite financial support from around the nation. And in South Carolina, another high-profile Republican, Senator Lindsey Graham, also retained his seat.

The long, hard road to the election

In a bitterly fought campaign, the candidates presented strikingly different visions of the country and its future, and of whether President Trump has been a protector or a destroyer.

As Election Day neared, Mr. Trump careened through a marathon series of rallies, alternating between confidence and exasperation, bravado and grievance. Mr. Biden concentrated his final efforts in Pennsylvania, returning to his birthplace, Scranton, on the morning itself. He used a track-and-field analogy about finishing the race: “You got to run through the tape, man. You got to go all the way through the tape.”

A pandemic election: The coronavirus, which in the U.S. has left millions of people out of work and killed more than 230,000 people, will be one of the most significant challenges for whoever wins the presidential race. It loomed over every chapter of the election, down to the final ballots.

Smooth sailing: Despite a chaotic campaign, Election Day itself was mostly without incident. There were a few glitches and partisan skirmishes as voters went to the polls, but for the most part the system held up. Mail-in balloting this year doubled from 2016. For many voters, that shift has been a revelation.

Look back: Our photographers documented the ups and downs of the Biden campaign and Mr. Trump’s tumultuous 2020, which began with impeachment and was followed by the pandemic.

Election workers throughout the U.S. will continue to count votes in the coming days. In Philadelphia — the biggest city in Pennsylvania, a crucial state — only 76,000 of more than 350,000 mail ballots had been counted by 9 p.m. Officials pledged to work around the clock, but the process was likely to extend well into Wednesday or later.

The pandemic: Regardless of the election’s outcome, President Trump will continue to lead the country until January, in what could be the deadliest period of the coronavirus pandemic for the U.S. He has largely excluded the nation’s leading health experts from his inner circle.

Climate change: The U.S. today formally exits the Paris climate agreement, a Trump decision that was part of the president’s overhaul of climate polices. Mr. Biden had pledged to reverse it, a campaign promise that now hangs in the balance. In a mid-October poll, 90 percent of voters who favored Mr. Biden expressed concern about climate change, compared with just 23 percent of voters who backed Mr. Trump.

After cemeteries in Mexico were closed on the Day of the Dead due to the pandemic, depriving people of their mourning rituals, one town went ahead with its annual weeping competition, giving everyone a chance to share in a cathartic cry.

The winner of the $164 cash award? Princesa Katleen Chávez Arce, an actress from Baja California. “The crisis hit me,” she said. “So yes, I cried, and for about a week I did absolutely nothing.”

The coronavirus: The U.S. is facing one of its most alarming periods in the pandemic, with more than 93,000 cases announced across the U.S. on Monday. In many Midwestern hot spots, hospitals and health care systems are overwhelmed. Here are the latest updates and maps of the pandemic.

Austria attack: A man who opened fire in central Vienna on Monday night, killing four people and wounding 22 others, had previously been arrested for trying to join ISIS and was known to Austria’s intelligence and law enforcement agencies. The gunman was killed nine minutes after the attack began.

Ant Group’s I.P.O. delayed: The biggest stock debut in history, expected to raise $37 billion, was postponed in Shanghai and Hong Kong, one day after Chinese regulators summoned Jack Ma and other executives of the financial technology giant.

Politics in Uganda: The authorities arrested two politicians as they registered to challenge President Yoweri Museveni, who has run the country since the 1980s. The detentions are the latest examples of the roadblocks facing opposition leaders and movements in African countries.

Snapshot: A poll worker in Durham, North Carolina, above, sanitizing a voting booth. A surge of coronavirus infections that swamped hospitals and set daily records for new cases in some states has resulted in a host of precautions to keep voters and poll workers safe. Our photographers chronicled the final day of voting across America.

Lives Lived: The dauntless foreign correspondent Robert Fisk, who spent three decades at the British newspaper The Independent covering wars in the Middle East and beyond, died at 74 on Friday.

What we’re reading: This moving read from Bicycling magazine, about a man’s quest to cycle the Swiss Alps, and how it relates — or doesn’t — to his relationship with his late father.

Cook: Cornbread tamale pie, a recipe plucked from The Joy of Cooking, is a crowd-pleasing classic. It elevates a quick beef chili by baking it with a simple cornbread batter on top.

Watch: “How To With John Wilson” has no stars or any kind of traditional story, and its main character, John Wilson, stays offscreen. The HBO series is “poignant, hilarious and topical,” our comedy columnist writes.

Do: Food has become more of a focal point at weddings. Here’s how to serve your guests safely at your reception.

Time at home is time to read, cook and do fun activities. Our At Home section has ideas to keep you engaged.

The importance of calming down

Having a stressful week — or year? Whether it’s because of lockdowns or elections, people around the world are on edge. Here are a few tips from our Well editor on letting go of anxiety and gaining perspective. Hopefully, they will help you catch your breath.

Interrupt yourself. As you feel your anxiety level rising, try to practice “self interruption.” Go for a walk. Call a friend. Run an errand. “I think people really need to move away from wherever it is they are and break the momentum,” said one meditation teacher.

Move for three minutes. It takes just a short burst of exercise — three minutes to be exact — to improve your mood, said Kelly McGonigal, a health psychologist and lecturer at Stanford University whose latest book is “The Joy of Movement.” Do jumping jacks. Stand and box. Do wall push-ups. Dance.

Tackle a home project. Get rid of clutter, make a scrapbook, get a new comforter, hang artwork.

Thank you
To Theodore Kim and Jahaan Singh, for the break from the news. You can reach the team at [email protected]

P.S.
• We’re listening to the latest episode of “Popcast,” on the many versions of Mariah Carey.
• Here’s our Mini Crossword, and a clue: Drink on a chilly fall day (five letters). You can find all our puzzles here.
• The photo editor Sandra Stevenson spoke about her role as a photographer on PBS Voices.