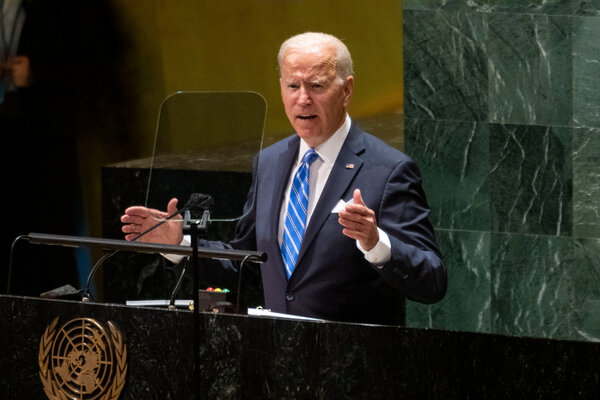 At the U.N., Biden calls for diplomacy

In his debut address at the U.N. yesterday, President Biden called for “relentless diplomacy” on climate change, the pandemic and efforts to blunt the expanding influence of autocratic nations like China and Russia. “Our security, our prosperity and our very freedoms are interconnected, in my view, as never before,” he said.

Biden made only brief mention of the global discord his own actions had stirred, including America’s chaotic retreat from Afghanistan and the secretive submarine deal with Australia that has created tensions with France — crises that have led some to question his commitment to empowering traditional U.S. alliances.

Speaking in a prerecorded interview, China’s leader, Xi Jinping, chastised the U.S., saying “democracy is not a special right reserved to an individual country.” Neither China nor the U.S. named their rival directly. Iran’s new president also rebuked the U.S. and showed little sign of flexibility on nuclear talks.

Cooperation: The U.N. secretary general, António Guterres, warned that nations needed to work together on war, climate change and the pandemic, “the greatest cascade of crises in our lifetimes.” Although he did not refer to the countries by name, he expressed fears about competition between China and the U.S., calling it “far less predictable than the Cold War.”

As Germany’s election looms on Sunday, the country’s fate is unlikely to be settled by the Alternative for Germany, or AfD, the first far-right party to win a presence in Parliament since World War II. But the AfD is hardly disappearing, despite declining support for a party that has questioned a Holocaust memorial in Berlin and described Muslims as “head scarf girls” and “knife men.”

The AfD is polling at roughly 11 percent, just below its 2017 result of 12.6 percent, and is all but guaranteed to remain in Parliament. (Parties with less than 5 percent of the vote do not get any seats.) Still, with all other parties refusing to include the AfD in any possible coalition, it is effectively barred from power — so long as the firewall remains in place.

Founded eight years ago as a nationalist free-market protest party opposing the Greek bailout and the euro, the AfD has sharply shifted to the right, actively fanning fears of Islamization and migrant crime. But as the pandemic and, more recently, climate change have shot to the top of the list of voters’ concerns, the party has struggled to expand its early gains.

Analysis: “The AfD is here to stay,” said Matthias Quent, professor of sociology at Magdeburg University of Applied Sciences and an expert on the far right. “There was the widespread and naïve hope that this was a short-lived protest phenomenon. The reality is that the far right has become entrenched in the German political landscape.”

New beginnings after an end to the U.S. travel ban

The Biden administration announced on Monday that it would end its ban on travel to the U.S. from 33 countries, including Britain and some member states of the E.U. The announcement has brought relief to many people around the world after more than 18 months of uncertainty, dashed professional opportunities and separation from loved ones.

As the months wore on, thousands who had been separated from family members shared their experiences online with the hashtag #LoveIsNotTourism. Some found arduous ways around the ban, such as traveling to a third country to circumvent the rule — though for most, such an expensive workaround was not an option.

The U.S. first implemented travel bans at the start of the pandemic in an unsuccessful attempt to stem the spread of the coronavirus. The restrictions have rankled Britain and nations in the E.U., particularly after those countries scrapped quarantine rules this summer and welcomed fully vaccinated travelers from the U.S.

First person: Katie Wait, a British citizen, has been unable to see her parents in Florida since 2019. “You never expected that if they went to live in America, you wouldn’t be able to get to them,” she said. “You never think in a million years things like this will happen, that the border would be closed.”

The O.E.C.D. said that a global economic recovery from the pandemic was finally taking hold, but that the rebound was benefiting wealthier countries more than the developing world.

Greece, which was among the first countries to ease coronavirus restrictions for travelers, had a surge in foreign visitors this summer, according to the country’s central bank.

Researchers have found that a second dose of Johnson & Johnson’s vaccine substantially increased its protection against Covid-19.

A gas station attendant in Germany was fatally shot after refusing to sell beer to an unmasked customer, a prosecutor said.

News From the Americas

Justin Trudeau will stay on as prime minister of Canada, but his party failed to secure a majority in this week’s election.

The Biden administration will raise the cap on refugee admissions to 125,000 for the coming 12 months.

Days before lawyers allied with Donald Trump gave a news conference promoting election conspiracy theories, his campaign officials had determined that many of those claims were false, court documents show.

A drone strike that killed 10 civilians, including seven children, in Kabul, Afghanistan, last month has called into question whether the U.S. military will be able to accurately respond to terrorist threats in the country from afar.

The British counterterrorism police charged a senior Russian military intelligence officer in the attempted assassination of Sergei Skripal, a former Russian spy who was poisoned in England in 2018.

The authorities in Sudan said they had thwarted a coup attempt by loyalists of the deposed dictator Omar Hassan al-Bashir, the latest sign of instability in the country.

The Taliban has announced the completion of its interim government. The lineup is entirely male and includes members of the Taliban’s old guard in the top echelon of the leadership.

A secret Facebook program was designed to burnish the company’s image by promoting pro-Facebook stories on the platform. Facebook had not previously positioned the News Feed as a place to improve its own reputation.

Google will spend $2.1 billion to buy a sprawling Manhattan office building, one of the largest transactions for a building in the U.S. in recent years.

A new study suggests that a single genetic mutation helps explain why monkeys have tails while apes and people do not.

Before the pandemic, most visits to the Caribbean island of Montserrat lasted little more than a day.

Tourists now hoping to set foot on Montserrat’s black sand beaches must pass a background check, make at least $70,000 a year and — until recently — commit to staying for at least two months. In exchange, they may have access to both the beaches and an alternate tropical reality where the coronavirus does not seem to exist.

Art that looks at what women see

The exhibition “Close-Up,” which opened on Sunday at the Beyeler in Basel, Switzerland, asks visitors to consider how female artists view their portrait subjects, reports Nina Siegal for The Times.

Curated by Theodora Vischer, the show of about 100 artworks presents portraiture from 1870 to the present day by nine women, including Mary Cassatt, Frida Kahlo, Cindy Sherman and Marlene Dumas. It asks: Is there such a thing as the “female gaze?” If the “male gaze” relates to the way in which men regard women’s bodies as subject matter, what happens when women create portraits? Do they look at their subjects differently?

“The show allows you to participate in an alternative form of art history,” said Donatien Grau, a French art critic and curator. It is, he said, art history as seen through the eyes of women artists.

Read more about the exhibition here.

Our reporter compared the new iPhone 13 to its predecessor. His verdict? It’s the most marginal upgrade so far.

In “The Right to Sex,” Amia Srinivasan, a professor of philosophy at Oxford, wants us to think more fully about sex as a personal experience with social implications.

And here is the Spelling Bee.

That’s it for today’s briefing. Thanks for joining me. — Natasha

The latest episode of “The Daily” is on The Times investigation on a U.S. drone strike in Afghanistan that killed civilians.