Home » Business » After a Hard Year, Holiday Commercials Get Real

Tear-jerker scenes and reminders of the coronavirus pandemic are part of a not-so-cheery seasonal ad blitz. 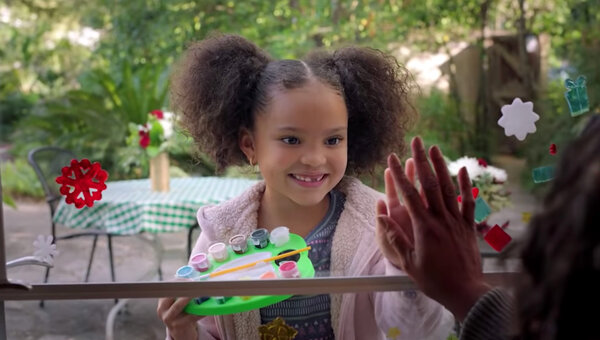 This time around, at the close of a hard year, the annual advertising blitz includes stark reminders of the coronavirus pandemic mixed into the usual images of shopping sprees and festive cheer.

“Let’s deck the halls — over video calls,” says the narrator of a Christmas-themed Walmart commercial that shows a variety of people in protective masks. A Heineken commercial in a similar vein ends with a tagline that gently acknowledges the challenges of celebrating in 2020: “Happy Holidays. #SocializeResponsibly.”

A melancholy commercial for Chick-fil-A follows a family of four into the main square of an almost deserted town, where an old-timer is having trouble getting the holiday lights to come on. “Seems like everything’s off this year,” says the mom.

The United States Postal Service, perhaps in need of some good publicity after President Trump repeatedly attacked it during a bruising campaign, has released a commercial set to a super-slow rendition of “I’ll Be Home for Christmas” that shows mail carriers, many of them wearing masks, heroically delivering letters and packages through rain, sleet and snow.

A holiday tear-jerker from the Texas supermarket chain HEB lingers on a visit between a young girl and her grandmother that takes place on either side of a glass door. In a montage sequence of people doing good deeds, the commercial also shows family members preparing boxed meals for nurses and doctors. “When Texans help Texans, we all shine,” the narrator says.

After more than 270,000 Americans have died of Covid-19, and many millions have lost their jobs or found themselves working from home as a result of the pandemic, companies would risk seeming out of touch if they were to put out commercials that were all sleigh bells and ho-ho-hos, marketing executives said.

“Our marketing has tried to be respectful and empathetic to what’s going to be a more challenging holiday season,” Brad Hiranaga, the chief brand officer for General Mills in North America, said in an interview. “Covid has forced us to shift focus to delivering value to consumers. And showing things that are the opposite of the world they’re living in does not do that.”

General Mills has adjusted its marketing so that it appeals to people who are preparing more meals at home and looking for easy, affordable recipes, Mr. Hiranaga added. In addition, he said, the company’s ads must also “speak to people who’ve lost their jobs, or are alone and feel disconnected, or are worried about being sick.”

Other companies have avoided the earnest approach, favoring satirical ads that seize on the “worst year ever” sentiment that has reigned on social media.

Olivia Colman, the star of “The Crown,” gives a wry voice-over performance in a commercial for Marks & Spencer. “What a year,” she says as a bottle of the British company’s seasonal gin fills the screen. “Let’s try to make Christmas a little brighter, shall we?”

In a commercial titled “Match Made in Hell,” Match.com makes a villain out of the year that is about to expire, showing the devil on a promising first date with a woman whose name is 2020.

An Xfinity commercial stars Steve Carell as a Santa Claus who is so fed up that he cuts off his own jolly greeting during a videoconference with his elves: “You know what? I can’t even fake it. Look, after the year we’ve just had, the usual gifts are just not going to cut it.” Later, he congratulates his workers, and by extension, consumers, for making it through a rough patch. “This year has been harder than ever,” he says into a smartphone cam from his sleigh. “And yet, somehow, you all found a way to pull it off.”

Ads for Amazon, Kohl’s and Microsoft home in on the stresses and missed connections of daily life during a pandemic by showing canceled dance recitals and notes taped to windows by lonesome neighbors seeking some kind of human connection. Tesco assures viewers that their quarantine sins — giving terrible haircuts to family members, for instance — will not land them on Santa’s naughty list.

A few companies have turned to nostalgia, as if hoping to hit delete on 2020. Aldi makes reference to decades-old movies like “E.T.” and “Home Alone” in a seasonal marketing campaign, and a Gucci commercial shows a holiday party set during the 1990s.

The Hershey Company produced an altered version of its popular holiday ad, which since 1989 had featured a ting-a-ling bell choir of Hershey’s Kisses. The changes it made to the commercial —  like the addition of live actors — drew the ire of fans who are seemingly weary of the many disruptions to their lives. The company quickly promised to continue airing the ad in its original version.

At time of high unemployment, Target has put an emphasis on affordability, said James Fraser, the head of strategy for the New York agency Mother, which works with the company.

“The balance we’ve been trying to manage is how to acknowledge the realities and challenges of Covid without stripping away the magic of the season,” he said. “How do you maintain that the holidays are a time of togetherness and joy, an opportunity to take a breather from the realities of the day to day, without being tone deaf?”

The pandemic caused $63 billion in spending to disappear from the global advertising market this year, according to the WARC research group. Since the crisis became a fact of American life in March, ad makers have had to revise their strategies on the fly.

“In the beginning, everyone wanted to show, ‘Hey, we get it,’” Mr. Fraser said. “But in the summer, there was a shift toward pretending that nothing was happening. Now, most brands have reached an acceptance of the new normal, the limitations on our lives, while still presenting a picture of hope.”