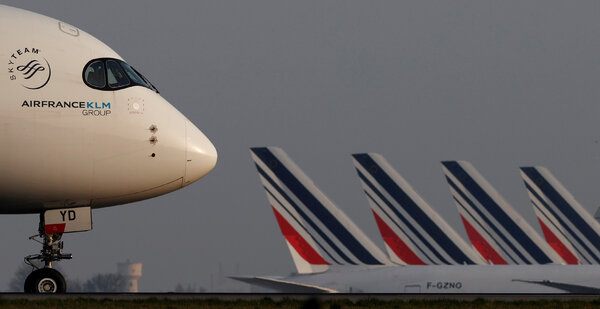 Air France on Tuesday said it would receive a new bailout from the French government worth 4 billion euros ($4.7 billion) to help the beleaguered airline cope with mounting debts as a third wave of pandemic lockdowns around Europe prolong a slump in continental air travel.

The support comes on top of €10.4 billion ($12.3 billion) in loans and guarantees that Air France and its partner, the Netherlands-based KLM, received from the French and Dutch governments last year.

Bruno Le Maire, France’s finance minister, said Tuesday that the new aid is taking the form of a state-backed recapitalization, which involves converting €3 billion in loans the government granted the airline last year into bonds with no maturity, as well as €1 billion in fresh capital through the issuance of new shares.

The French government is the airline’s largest shareholder, at 14.3 percent. The agreement could allow the government to raise its stake as high as 30 percent, Mr. Le Maire and Air France said, by buying some of the new shares. China Eastern Airlines, also a large shareholder, will also participate, Air France said.

Air France-KLM lost two-thirds of its customers last year, and its debt has nearly doubled to €11 billion. It expects an operating loss of €1.3 billion in the first quarter.

As vaccinations speed ahead in the United States, air travel has started to recover, fueling a return of ticket sales. Delta Air Lines announced it would add more passengers and start selling middle seats for flights starting May 1.

By contrast, Europe’s vaccine rollout has faltered and variants of the virus have gained ground, prompting renewed travel restrictions. That has left major flagship air carriers, including Air France-KLM, Lufthansa of Germany, and Alitalia of Italy, struggling.

The French government recently cut its economic growth forecast for 2021 to 5 percent, down from 6 percent.

Air France’s board approved the deal on Tuesday after the French government and European regulators agreed on the terms.

The Dutch government is holding separate talks with European regulators over converting a €1 billion loan to KLM into hybrid debt in return for slot concessions at the Schiphol Airport in Amsterdam.

Air France employs tens of thousands of workers in France and is considered too big to fail. Still, Mr. Le Maire said the aid was not a “blank check,” adding that the company would have to “make efforts on competitiveness” in exchange for the support and must continue to reduce its carbon emissions.