Home » Business » Blade Takes Off for the Stock Markets 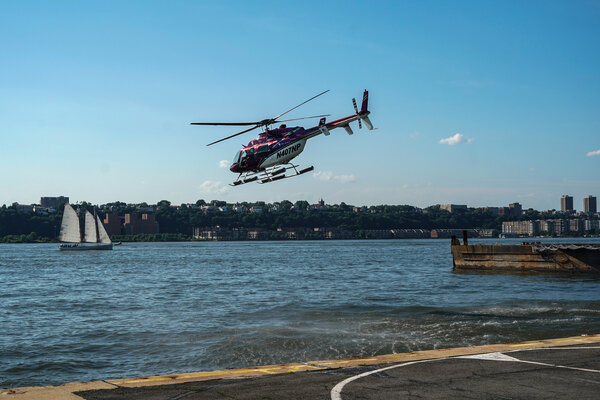 Blade Urban Air Mobility, the New York-based helicopter taxi service, has struck a deal to go public via a sale to a blank-check company backed by KSL Capital that values the company at about $825 million. The deal includes $400 million in proceeds, which includes a $125 million infusion along with the cash in the SPAC. Pending the deal’s closure, it will trade on the Nasdaq under the ticker “BLDE.”

An upscale way to get from here to there. Blade was founded in 2014 by Rob Wiesenthal, the former Warner Music and Sony exec, catering to wealthy Manhattanites seeking a quicker way to get to the Hamptons, Nantucket and other popular summer destinations. (The 40-minute flight from Manhattan to East Hampton currently runs $795 per seat.) Blade has since expanded into other modes of transit, like seaplanes and private jet flights from Westchester to Aspen, Miami and further afield. During the pandemic, Blade has added other perks, including on-site Covid testing before check-in.

A flying E.V. SPACs have bet big on electric vehicles this year, looking to catch a winner in the shift to a low-carbon economy. There is an E.V. aspect to the Blade deal, too. Some of the proceeds in the merger will go toward its adoption of electric aircraft. The nascent technology is still working toward regulatory approval, with the U.S. military and Airbus, a Blade investor, among those developing prototypes.

KSL, the private equity firm behind the SPAC, also owns the airport services group Ross Aviation, which it says will partner with Blade on some routes, providing maintenance and — eventually — electric charging stations.

An elite investor base. Blade’s investors reflect the sort of clientele it attracts, including IAC’s Barry Diller, iHeartMedia’s Robert Pittman and Discovery’s David Zaslav. They’re joined in the deal by the venture investor Chamath Palihapitiya, the media mogul David Geffen, HG Vora Capital and KSL. Mr. Palihapitiya’s involvement is notable, given that he typically runs his own SPACs as the sponsor backing the deal.

Lawmakers split their bipartisan stimulus proposal. To break a political logjam, the group of moderates divided their $908 billion plan in two: a $748 billion package that includes reviving federal unemployment payments and small business loans, and a $160 billion bill addressing more contentious issues like aid for states and a legal liability shield for employers. It’s unclear whether the move will win enough support to pass.

Oracle’s Larry Ellison joins the flight of Silicon Valley billionaires from California. After his tech giant announced plans to move its headquarters to Austin, Texas, the billionaire said he had moved to the Hawaiian island of Lanai. He follows the likes of Elon Musk in leaving California, citing the state’s strict regulations and high taxes.

Russian hacks of U.S. government agencies draw attention to SolarWinds. As federal officials confirmed that more agencies — including the State Department, the Department of Homeland Security and the Pentagon — were attacked, experts are studying how SolarWinds’ network-monitoring software was breached. It’s an important question, given how widely the company’s products are used.

Exxon Mobil rolls out a climate change plan. The oil giant, facing pressure from activist investors and falling demand for fossil fuels, outlined a five-year road map to reduce greenhouse gas emissions. The proposal will include “input from shareholders.”

Microsoft and Wisconsin pro sports teams form a new impact investment fund. The tech giant is partnering with the Green Bay Packers, the Milwaukee Bucks and the Milwaukee Brewers on the Equity League, a division of the investment firm Titletown Tech focused on social-minded start-ups run by Black and Hispanic founders.

Governments are intent on curbing the perceived privacy and competition excesses of technology giants, if recent moves on two continents are anything to go by. Yesterday, the U.S. Federal Trade Commission opened a study of nine social media and streaming platforms’ data collection practices. Today, E.U. regulators are expected to unveil sweeping new antitrust and consumer protection rules. (They just fined Twitter around $550,000 for violating a user privacy law.)

The F.T.C. gave companies 45 days to hand over information. Amazon, the TikTok-operator ByteDance, Discord, Facebook, Reddit, Snap, Twitter, WhatsApp and YouTube must share how they collect, use, target and disclose data, as well as how their services affect children. (Commissioner Noah Joshua Phillips dissented, arguing that the “scattershot” inquiry was an “undisciplined foray into a wide variety of topics, some only tangentially related to the stated focus of this investigation.”) It’s not an official F.T.C. investigation, but could theoretically lead to an enforcement action.

Last week, the F.T.C. accused Facebook of buying rivals to kill competition, and that case, joined by more than 40 states, followed a February study on Big Tech’s acquisitions of smaller rivals.

Tech companies accept that changes are coming, with bipartisan pressure mounting when it comes to revamping Section 230 of the Communications Decency Act, which shields companies from liability for user-generated content. For two decades, Big Tech said the law should not be touched, but this resistance has recently relaxed, The Times’s David McCabe reports. Facebook’s chief has conceded that the law should be updated, Twitter’s head suggested “expansions,” Google acknowledged “legitimate questions” and a group of smaller companies — including Snap, Reddit and TripAdvisor — plan to say today that they are open to discussing reforms, too.

Whether they mean it is another question. “They are deeply averse to real changes,” said Senator Richard Blumenthal, who has proposed legislation to limit protections for platforms.

“We’re going to not do anything that jeopardizes taxpayers and puts them at additional risk.”

A major settlement that raises even more questions

Yesterday, Pinterest settled a gender discrimination and retaliation lawsuit with its former chief operating officer, Françoise Brougher, for $22.5 million. It is among the largest publicly announced individual settlements for such a claim, and immune to appeal, and the move — in which Pinterest did not admit liability — highlighted other injustices.

Two Black women had Ms. Brougher’s back. Ifeoma Ozoma and Aerica Shimizu Banks had accused Pinterest of sexism and bias before the former C.O.O. spoke out about “cupcakes and toxicity” at the company, and they got less than a year’s severance when they left. Ms. Ozoma lamented the difference in outcomes on Twitter: “We came forward about a company and harmful culture literally nobody had spoken about before on the record. With our identities attached, in the midst of a pandemic. We were and still are treated like trash by @Pinterest leadership.”

“I. Am. Livid.” tweeted Timnit Gebru, an A.I. ethicist who said she had been fired from Google after friction over her research about algorithmic bias. She was not alone. Joan Donovan, the research director of Harvard’s center on media and policy, noted on Twitter, “Who they pay out vs who they force out says more about the racism in these tech companies than any PR statement.”

Shares in Airbnb and DoorDash fell sharply yesterday after analysts said their I.P.O.s had pushed valuations up to unsustainable levels. (Bloomberg)

Group Nine Media, the owner of websites like TheDodo, is reportedly weighing the creation of a blank-check company to buy more rivals. (WSJ)

Attorney General Bill Barr will step down next week, ending his tenure as one of President Trump’s most powerful cabinet officials. (NYT)

Congress is nearing agreement on a $1.4 trillion spending bill before a Friday deadline to avoid a government shutdown. (Politico)

Despite the Trump administration’s efforts, Americans are buying more Chinese imports than ever, thanks to the pandemic. (NYT)

California regulators fined Uber $59 million and threatened to suspend the company’s operating license over its refusal to release data on sexual assaults on its platform. (WaPo)

Yesterday’s Google services outage showed how much the world depends on the tech giant. (NYT)

Dennis Muilenburg, the Boeing C.E.O. forced out amid the 737 Max scandal, has announced his next act: investing in “driver-optional” tractors. (Bloomberg)

How Sandra Lindsay, the New York City nurse who was the first person in the United States to receive Pfizer’s Covid-19 vaccine, and social media influencers hope to persuade others to get inoculated. (NYT, Recode)

Inside the Japanese subculture of “poikatsu,” or loyalty points hacking. (Rest of World)