The supercar maker McLaren Group is to axe a quarter of its workforce as it races to shore up its balance sheet amid a row with bondholders.

Sky News has learnt that the Surrey-based owner of one of Formula One’s most historic names will announce on Tuesday that 1,200 jobs across its operations will be lost as the coronavirus pandemic hammers the automotive industry.

The cuts will be the latest announced across the sector, with Nissan, the Japanese car manufacturer, reportedly planning to announce up to 20,000 redundancies this week. 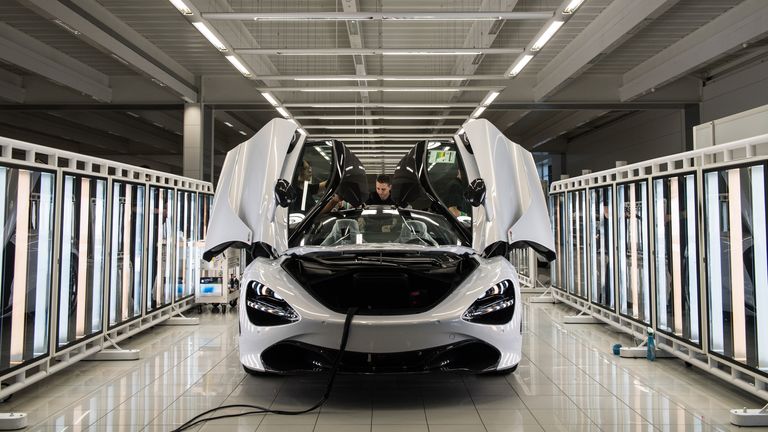 McLaren will brief employees on the proposed cuts as it seeks to borrow up to £275m against the value of its classic car collection and spectacular Surrey headquarters.

The redundancies equate to more than 25% of the group’s workforce of just over 4,000 – and will be spread across its F1, road-car and Applied Technologies operations.

One insider said it was being undertaken to make McLaren “appropriately sized for the new reality”.

The looming F1 cost cap, which will be introduced next year, is expected to be cited as one of the factors behind the restructuring.

The company has seen revenues stall at its road-car business, although it – along with the rest of the F1 paddock – has been given a boost by Boris Johnson’s decision to allow two Grands Prix to take place at Silverstone in July by exempting the sport’s personnel from quarantine restrictions.

In a statement issued in response to an enquiry from Sky News, Paul Walsh, the company’s executive chairman, said it was “undoubtedly a challenging time for our company, and particularly our people, but especially those whose jobs may be affected”.

Mr Walsh added that the company had already “undertaken dramatic cost-saving measures across all areas of the business”.

The announcement comes on the same day that rival luxury carmaker Aston Martin Lagonda announced that it was replacing its chief executive, and just 72 hours after Sky News revealed that Jaguar Land Rover was in talks with the government about a mammoth loan from taxpayers.

McLaren’s effort to raise new debt by issuing bonds is being assembled by JP Morgan, its investment banking adviser.

The plan has run into trouble, however, amid objections from existing bondholders about the removal of their security over historic cars driven by the likes of Ayrton Senna, the former F1 world champion, and Bruce McLaren, the group’s founder.

McLaren’s drive to access new funding has been accelerated in the wake of a request for a £150m loan from the government being rejected.

Sky News revealed this month that McLaren had approached the Department for Business, Energy and Industrial Strategy (BEIS) with the funding request after seeing sales of its supercars evaporate as a result of the COVID-19 crisis.

The government is said to have rejected the initial approach from McLaren on the basis that it had not yet demonstrated that it had exhausted alternative sources of financing.

In March, the company’s shareholders, who are led by Mumtalakat, Bahrain’s sovereign wealth fund, injected £300m of equity into McLaren.

On a call with investors last month, Paul Buddin, McLaren’s chief financial officer, told investors: “We are looking at a number of very credible sources, and that includes all [those we] might be expected to ask, including government, including third parties.”

A significant chunk of McLaren’s workforce has been furloughed under the Coronavirus Job Retention Scheme.

The company is a major British exporter, supporting thousands of jobs across the UK supply chain.

It is also a major investor in UK technology research and development.