Home » Business » Do Dunkin’ and Arby’s Go Together? Private Equity Group Bets $11 Billion They Do

In one of the largest restaurant deals in more than a decade, Dunkin’ will join some of America’s best-known restaurant chains, including Arby’s and Buffalo Wild Wings, under a single privately held owner.

Dunkin’ Brands, the parent of Dunkin’ and Baskin-Robbins, agreed on Friday to sell itself for $11.3 billion, including debt, to Inspire Brands, the holding company that owns Sonic Drive-In and Jimmy John’s as well as Arby’s, Buffalo Wild Wings and others. Backed by the private equity firm Roark Capital, Inspire had already grown into one of the country’s largest restaurant operators since it formed less than three years ago. It employs more than 325,000 people, directly and via franchises, across more than 11,000 restaurants.

Buying Dunkin’ will more than double Inspire’s footprint, adding 12,700 Dunkin’ and 7,900 Baskin-Robbins outlets, which are all franchised. Inspire is paying a steep price: a 20 percent premium to Dunkin’s share price in the days before The New York Times first reported the talks. The shares were already trading near a record high, more than doubling since the pandemic hit in March.

“Dunkin’ and Baskin-Robbins are category leaders with more than 70 years of rich heritage, and together they are two of the most iconic restaurant brands in the world,” Paul Brown, the chief executive of Inspire Brands, said in a statement on Friday.

The deal is a bet that Dunkin’ will survive — and even thrive — as much of the industry has been ravaged, with about one in six restaurants having closed this year, some permanently. Fast-food outlets have held up better than full-service restaurants, as takeout and drive-through options have proved to be more appealing than long meals in a room full of strangers.

Dunkin’ has drive-through windows in about 70 percent of its restaurants and was already investing in digital-ordering tools to promote “high-frequency, low-touch” service. A $100 million plan to “accelerate its beverage-led strategy,” as the company described it in 2018, has also paid off as the pandemic has scrambled people’s routines. Customers are coming in later than the traditional before-work rush and ordering more expensive drinks.

“This team’s grit and determination has enabled us to deliver outsized performance and made our brands among the most elite in the quick service industry,” Dunkin’s chief executive, Dave Hoffmann, said in a statement on Friday. “I am particularly proud of our actions since March of this year. During the global pandemic, we have stood tall. We’ve had each other’s backs and are now stronger than ever.”

The chain dropped the word “Donuts” from its name last year, and now generates more than half of its sales from drinks. It serves more than two billion cups of coffee a year, with higher-margin, espresso-based coffees growing in popularity over cheaper options.

“They’re not getting people on their way to work, but they are getting people that are sick of making coffee at home,” said Adam Werner, who works in the restaurants, leisure and hospitality practice at AlixPartners, a consulting firm. Happy to be out of the house, those people might also be enticed to “pick up a couple of doughnuts for kids that are home-schooling,” he added.

Dunkin’ Brands generated $74 million in profits in the third quarter, up about 2 percent from a year earlier. Still, it has been affected by the recession, announcing a plan in the summer to close 800 “low-volume, underperforming locations” this year.

Bill Rosenberg opened the first Dunkin’ Donuts in Quincy, Mass., in 1950. He turned it into a franchise business and passed it on to his son Robert in the 1960s. Since then, the chain has spent time as a publicly listed company as well as a part of larger corporations until, in 2005, a consortium of private equity firms — Bain Capital Partners, the Carlyle Group and Thomas H. Lee Partners — bought it for $2.4 billion from its parent at the time, France’s Pernod Ricard. The consortium owned it for six years before returning it to public investors. 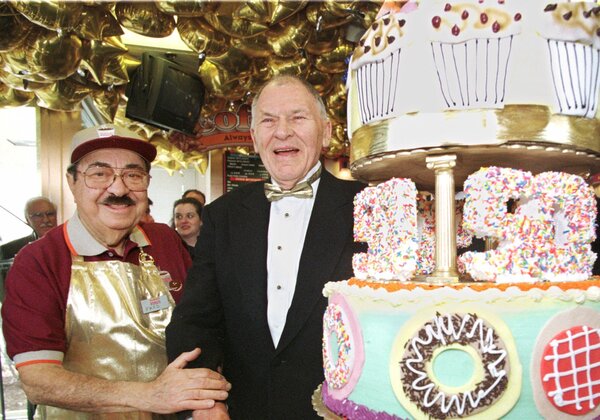 The takeover by Inspire is the second time that Dunkin’ will be owned by private equity. In recent years, the private equity owners of consumer brands like Neiman Marcus, Payless ShoeSource and Toys “R” Us have been criticized for those leveraged buyouts, which left behind debt that limited the brands’ ability to respond to new needs before they succumbed to bankruptcy.

Inspire’s primary backer, Roark Capital, isn’t the stereotypical private equity firm. Roark, which is named for the protagonist in “The Fountainhead,” by Ayn Rand, is known for investing in its companies’ digital abilities, managing them at arm’s length and holding investments for longer than the typical three to five years for private equity firms. In some cases, it has held on to companies for more than a decade.

Roark was founded in 2001 with a focus on franchised businesses. It bought Arby’s in 2011, turned the ailing business around and merged it with Buffalo Wild Wings in 2018 to form Inspire Brands, which is controlled by Roark but also raises its own funds from other investors. It acquired Sonic in 2018 and Jimmy John’s in 2019.

What it was missing, until now, was coffee.

With Dunkin’, Inspire is squaring off more directly against Starbucks and JAB Capital, the European private equity firm that owns Panera, Peet’s, Krispy Kreme and others. The digital investments that bolstered Inspire’s other portfolio companies could help Dunkin’ compete where it is already strong in the Northeast. But to grow to more than 17,000 locations, as Dunkin’ has cited as a long-term goal, it may need to go where it has not gone before, at least in earnest — west of the Mississippi, into Starbucks territory.

“The ability to expand on the West Coast is essential,” said Peter Saleh, an analyst at BTIG, a brokerage firm. He warned in a research note in October that Dunkin’ was “approaching saturation in its core Northeast markets.” Dunkin’ opened its first outlets in California in 2015.