Amazon wrote to President Biden on Thursday offering to assist with communication and technology. Microsoft is opening up its largely empty office campus as a vaccination center as part of a broader partnership with the State of Washington. Starbucks is assigning workers from its operations and analytics departments to help design vaccination sites, donating the labor to the same state while continuing to pay employees.

While some retailers and pharmacy chains have been directly involved in the rollout of coronavirus vaccinations, more surprising is the number of companies that have offered help despite having little to do with health care.

What these companies do have are vast national footprints, significant manpower, huge distribution warehouses and, in some cases, empty office buildings. And they have the money to spare for a public service effort that could boost both their public image and their bottom line.

“Big companies can think big,” said Arthur Herman, senior fellow at the Hudson Institute, a think tank in Washington, D.C. “They can afford to step back and think about their role as a social force in their state and in the country. They also have enormous supply chains and logistical connections.”

As Mr. Biden tries to achieve his goal of carrying out 100 million doses in 100 days, he will need all the help he can get. The president has asked Congress for $20 billion to help fund vaccinations at stadiums, pharmacies and the like. He said Friday that he had tapped the Federal Emergency Management Agency to operate up to 100 mass vaccination sites.

But the private sector could assist the administration’s efforts with data storage, appointment scheduling, the delivery of supplies to clinics and hospitals, and more.

“Amazon, Google, Microsoft, these guys are consumer-facing people who can deal with billions of transactions on a daily basis,” said Suketu Gandhi, a partner Kearney, a management and consulting firm.

Washington’s governor, Jay Inslee, included the help of companies like Starbucks, Costco and Microsoft in a plan to vaccinate 45,000 residents a day.

“We are not a health care company,” Kevin Johnson, the chief executive of Starbucks, said at a news conference announcing the partnership on Monday, “but Starbucks does operate 33,000 stores at scale, serving 100 million customers a week. And we have a world-class team of human-centered-design engineers who are working under the direction of the state, and health care providers like Swedish, Kaiser Permanente and others.”

The coffee chain will lend its expertise in “operational efficiency,” among other things, Governor Inslee said in a news release.

Answers to Your Vaccine Questions

While the exact order of vaccine recipients may vary by state, most will likely put medical workers and residents of long-term care facilities first. If you want to understand how this decision is getting made, this article will help.

Life will return to normal only when society as a whole gains enough protection against the coronavirus. Once countries authorize a vaccine, they’ll only be able to vaccinate a few percent of their citizens at most in the first couple months. The unvaccinated majority will still remain vulnerable to getting infected. A growing number of coronavirus vaccines are showing robust protection against becoming sick. But it’s also possible for people to spread the virus without even knowing they’re infected because they experience only mild symptoms or none at all. Scientists don’t yet know if the vaccines also block the transmission of the coronavirus. So for the time being, even vaccinated people will need to wear masks, avoid indoor crowds, and so on. Once enough people get vaccinated, it will become very difficult for the coronavirus to find vulnerable people to infect. Depending on how quickly we as a society achieve that goal, life might start approaching something like normal by the fall 2021.

Yes, but not forever. The two vaccines that will potentially get authorized this month clearly protect people from getting sick with Covid-19. But the clinical trials that delivered these results were not designed to determine whether vaccinated people could still spread the coronavirus without developing symptoms. That remains a possibility. We know that people who are naturally infected by the coronavirus can spread it while they’re not experiencing any cough or other symptoms. Researchers will be intensely studying this question as the vaccines roll out. In the meantime, even vaccinated people will need to think of themselves as possible spreaders.

The Pfizer and BioNTech vaccine is delivered as a shot in the arm, like other typical vaccines. The injection won’t be any different from ones you’ve gotten before. Tens of thousands of people have already received the vaccines, and none of them have reported any serious health problems. But some of them have felt short-lived discomfort, including aches and flu-like symptoms that typically last a day. It’s possible that people may need to plan to take a day off work or school after the second shot. While these experiences aren’t pleasant, they are a good sign: they are the result of your own immune system encountering the vaccine and mounting a potent response that will provide long-lasting immunity.

No. The vaccines from Moderna and Pfizer use a genetic molecule to prime the immune system. That molecule, known as mRNA, is eventually destroyed by the body. The mRNA is packaged in an oily bubble that can fuse to a cell, allowing the molecule to slip in. The cell uses the mRNA to make proteins from the coronavirus, which can stimulate the immune system. At any moment, each of our cells may contain hundreds of thousands of mRNA molecules, which they produce in order to make proteins of their own. Once those proteins are made, our cells then shred the mRNA with special enzymes. The mRNA molecules our cells make can only survive a matter of minutes. The mRNA in vaccines is engineered to withstand the cell’s enzymes a bit longer, so that the cells can make extra virus proteins and prompt a stronger immune response. But the mRNA can only last for a few days at most before they are destroyed.

Microsoft will open up an empty building on its campus in Redmond to vaccinations in partnership with the state and health care providers. It is also offering its technology, building on abilities it has already offered to the government, including artificial intelligence to the State Department of Health to help track hospitalizations and tests.

Amazon is holding a pop-up vaccine clinic in Seattle on Sunday, through a partnership with Virginia Mason Medical Center; they hope to vaccinate 2,000 people. The company has also offered to vaccinate its own employees in the state, many of whom it says are essential workers — an offer it has made to Tennessee as well.

This past week, Amazon told the Biden administration that it could help with “operations, information technology and communications capabilities.” It did not elaborate to The New York Times on what the assistance would entail.

“The scale of some of these retailers is so important,” said Andrew Lipsman, analyst at the data analytics firm eMarketer. “They’ve never been better equipped to handle increases in volume, especially because they have had to ramp up their operational capacity in the middle of the pandemic.”

Certain companies may hope their offers endear them to the new administration — or the public.

“It’s great P.R. to be seen as someone who helps during this crisis,” said Mr. Herman, the senior fellow at the Hudson Institute.

Companies are also encouraging their workers to get vaccinated. Representatives for Kroger and Walmart said vaccination efforts would include their employees who were eligible to receive one.

Some retailers are giving their employees direct incentives to get vaccinated.

JBS, the meatpacking giant, is offering a $100 bonus. (The industry’s working conditions make its employees particularly vulnerable to the coronavirus.) Dollar General, which has 157,000 workers in about 17,000 stores, is giving them four hours of pay if they get a vaccine. The grocery delivery service Instacart said it would provide a $25 stipend. Chobani is covering up to six hours of wages so workers can get vaccinated.

“We’re going to do our part to help defeat this virus that’s hurt so many,” said Peter McGuinness, Chobani’s chief operating officer. “And, in doing so, it’s going to keep our employees safer.” 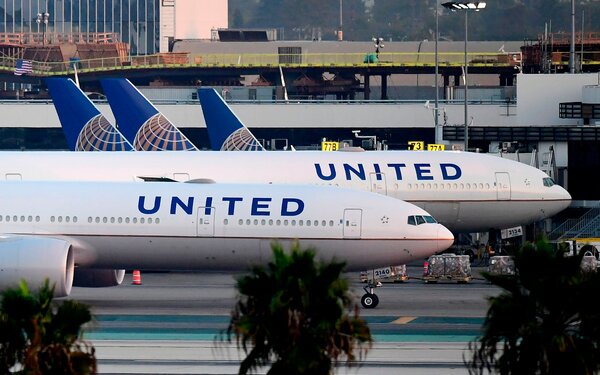 Other companies’ approaches are more stick than carrot, saying they may require vaccinations. Scott Kirby, the chief executive of United Airlines, which reported its biggest losses in a decade for the fourth quarter, told employees on Thursday that the carrier — and other businesses — could make the coronavirus vaccine mandatory for all workers.

Companies with vaccinated employees are likely to be more attractive to customers, making them feel safer when shopping or receiving assistance in stores. For some, mass vaccination may be essential for their business to stabilize.

“There’s no doubt that getting their employees vaccinated is going to be good for business and will be an important boost to getting the economy back on track,” said Mr. Herman, who has written a book about the mobilization of American industry during World War II.

Still, to achieve national vaccination requires what Mr. Biden has described as a “full-scale wartime effort,” with its success dependent on coordination among companies, federal agencies and a bitterly divided Washington.

“These companies have a huge, huge opportunity to help,” Mr. Gandhi of Kearney said. “Will they save the day? I don’t know.”