Home » Business » How May We Serve You? For Restaurant Chains, It Depends on the Location

Executives at the Brazilian steakhouse chain Fogo de Chão thought they had seen the worst of it.

Earlier in the year, when seemingly each hour brought news of another city or state abruptly shutting down because of the pandemic, executives switched from email to the messaging system WhatsApp to communicate in real time with the general managers of their 43 U.S.-based restaurants scattered around the country.

“The first time we heard a state issue a stay-at-home order we were like, ‘What does that mean? What are they talking about?’” said Barry McGowan, the chief executive of Fogo de Chão. “Then it was like dominoes falling. Boom. Boom. Boom.”

Communicating with vendors was hit or miss. Trucks full of food pulled up to restaurants that had been closed.

The restaurant chain created a takeout menu in just three days. It reached out to landlords to negotiate breaks on its leases. And as orders to stay closed were lifted, it spent about $1 million renting tents and other equipment to set up outdoor dining at many of its restaurants where indoor dining was still restricted.

For a while, it worked. Diners flocked to the restaurants and spent lavishly. Before the pandemic, Fogo de Chão sold about 500 premium steaks, like Wagyu and Tomahawk rib-eyes, per week. That shot up to 1,300 per week by July.

But with virus cases rising again across the country, new restrictions have been placed on indoor and outdoor dining, though they are far from uniform (no indoor dining in Philadelphia, Chicago and New York City, indoor dining curfews in New Jersey and Massachusetts, no restaurant dining at all in much of California). For larger dine-in chains like Fogo de Chão, the ever-changing patchwork of rules poses a particular logistical challenge: How do you come up with a companywide approach when different locations are dealing with their own specific regulations? 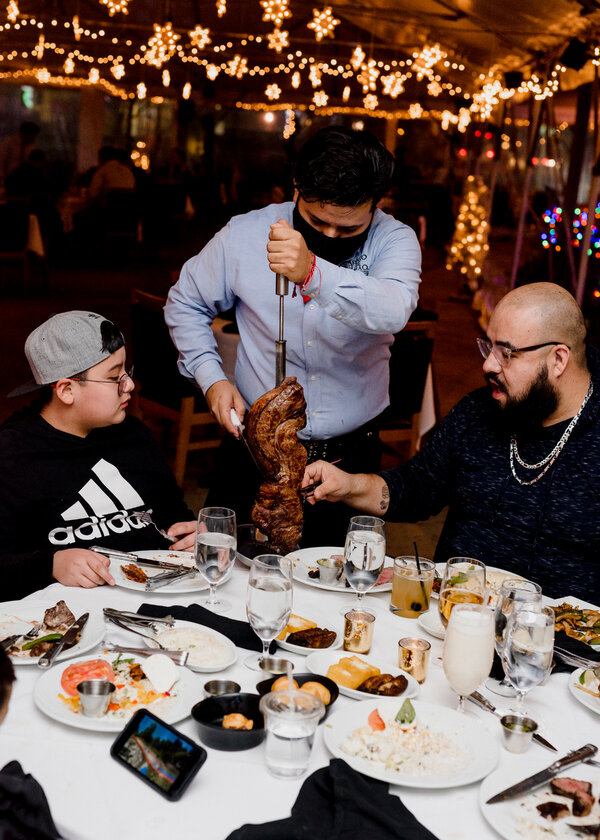 “What you have is a massive deviation from standard in terms of how a chain is operating restaurant locations in different states, which then requires a whole set of processes and management to make sure that you comply with the regulations,” said Sean Ryan, a partner at Kearney, a consulting firm. “It’s costly and time consuming.”

Restaurants must work with local health departments that hand down specific guidance on measures that must be taken to prevent the spread of the virus. Some require outdoor dining tents or structures that have no more than two walls to provide adequate ventilation. Others want three sides of tents to remain open.

And just as they did earlier in the pandemic, restaurants are quickly adapting once again, by shifting deliveries of food, alcohol, linens and other products from locations that are temporarily closed to ones that remain open. Some are doing the same with personnel.

“Restaurateurs are in a state of despair,” said Phil Kafarakis, an industry analyst and the former chief innovation officer for the National Restaurant Association. “People are in total panic mode right now and are starting to take drastic measures to continue to survive.”

The restaurant industry has been clobbered by the coronavirus pandemic this year. By some estimates, nearly 110,00 restaurants have permanently closed and 2.1 million employees remained unemployed as of October. Several large casual and upscale dining chains like Chuck E. Cheese, California Pizza Kitchen and some Il Mulino restaurants spiraled into bankruptcy.

The new restrictions come at a rough time since the holiday season is typically the busiest period for the industry.

Maggiano’s Little Italy chain, which operates over 50 restaurants in the United States, typically would be filled with company parties and family celebrations at this time of year.

But because of various dining restrictions, 2020 would be different, executives at Brinker International, which owns Maggiano’s and Chili’s Grill and Bar, warned Wall Street analysts in September. “Our anticipation right now is we won’t see that same similar environment playing out,” said Joe Taylor, Brinker’s chief financial officer. This week, Brinker withdrew its guidance for the quarter as a number of its locations were again shut down.

Still, in many ways, the large dine-in chains are better positioned for the new restrictions than they were in the spring.

“There were so many unknown variables during the springtime,” said R.J. Hottovy, an analyst at the consulting firm Aaron Allen & Associates. “This time around, restaurant operators had a specific game plan in place.”

Left with empty dining rooms, casual and upscale dining chains moved quickly to beef up or offer to-go options the first time around. They launched curbside pickup and signed on with food delivery partners like DoorDash and Grubhub. Some states loosened liquor laws, allowing chains to offer alcoholic beverages for takeout. And when restaurants were allowed to serve diners again, with restrictions, many rented tents or opened up patios to create outdoor seating.

But chains saw uneven performance among their restaurants.

By the end of summer, Olive Garden restaurants were averaging $70,000 in sales per week. But sales at the chain’s superstar restaurant in Times Square in New York, which was offering only takeout during the summer, plummeted to $17,500 per week, down from roughly $288,000 per week, executives of Darden Restaurants, which owns Olive Garden, LongHorn Steakhouse and The Capital Grille, told Wall Street analysts in September.

Darden’s stock, along with that of many restaurant companies, bounced back this fall and winter, partly on the success many have had in offering to-go or outdoor dining, as well as the expectation that diners will return in droves to eating out once vaccines become widely available in the United States.

Indeed, just a few weeks ago, the caipirinhas flowed freely and $135 Wagyu rib-eye steaks sizzled as they were delivered to diners under a tent at the Beverly Hills location of Fogo de Chão. The location was the chain’s busiest, but many of its other restaurants were also rebounding strongly.

By early November, the chain, which in based in Plano, Texas, and was acquired in 2018 by the investment firm Rhone Capital, was making 93 percent of the revenues it had made at the same time last year and had hired back about 90 percent of the employees who had been furloughed earlier in the year. Sixteen of its restaurants located largely in states with fewer dining restrictions were seeing higher sales than those last year.

But as states have put in new restrictions, Fogo de Chão has gone back to its earlier playbook. It is moving food around and a few weeks ago reached out again to landlords to negotiate lease payments.

The once-bustling tent in Beverly Hills sits empty after health officials shut down outdoor dining in Los Angeles County for three weeks. About 2,300 miles away in a suburb of Detroit, another tent sits empty. Fogo de Chão had to remove three sides of the tent, per local health regulations, and now has to figure out a way to add barriers to block the freezing winds.

But inside a cozy “Winter Wonderland”-themed tent in Rosemont, Ill., a suburb of Chicago, where restaurants need only two side panels open, customers are able to nosh on shrimp cocktails and sip on bottles of South American wine every night as they sit around heaters and under twinkling lights with Christmas music spilling through speakers.

In an effort to keep as many workers employed as possible, Fogo de Chão is offering to shift some employees from locations that are temporarily closed to ones that are thriving, including those in Las Vegas, Orlando, Dallas and Rosemont.

“Our goal is to keep our employees employed through the holidays,” Mr. McGowan said. “Our hope is that in January we can open up our patios and tents in parking lots again. And then, the vaccine will come and hopefully, by March or April, we’re back to some sort of normal.”