Chris Hurn wasn’t surprised scammers were trying to get government money. An enormous relief effort like the $523 billion Paycheck Protection Program is bound to attract grifters.

As thousands of applications for government-backed loans flooded into his firm, Fountainhead Commercial Capital, it reported at least 500 suspicious cases to federal officials, Mr. Hurn said. But what shocked him was the brazen glee of the scammers who got money anyway.

At least a dozen times, “someone tried to defraud us, got turned down and then followed up to taunt us that they got their loan,” said Mr. Hurn, Fountainhead’s chief executive.

Four months after the federal government’s signature coronavirus relief program for small businesses expired, investigators and lawmakers have only scratched the surface of schemes that illicitly tapped its forgivable loans. The program’s hastily drafted and frequently revised rules, its removal of normal lending guardrails and governmental pressure to swiftly approve applications created the ideal conditions for thievery to thrive.

“We couldn’t believe how many people were trying to take advantage and game the system,” said Mr. Hurn, whose firm made more than 8,000 loans. “A lot of my employees, including me, were a little frustrated with humanity.”

So far, the Justice Department has brought criminal charges against more than 80 people accused of stealing at least $127 million from the relief program, but there’s far more to uncover. The House Select Subcommittee on the Coronavirus Crisis said it had identified more than $4 billion in potentially improper loans, and some bankers believe the total will be much higher.

A Small Business Administration fraud hotline that took in 742 complaints in 2019 has received more than 100,000 this year. And there are hundreds of active investigations across more than a dozen government agencies, meaning a program that offered borrowers a few months of relief will spark years of court actions.

In more than a dozen interviews, bank executives described the fraudsters’ methods. Many attempts were lazy and unsophisticated, like listing employees who all made the same salary. Others had many employees collecting a monthly paycheck of $8,333, reflecting a $100,000 salary, the largest that a Paycheck Protection Program loan could be used to subsidize.

Lenders typically followed up on suspicious applications with emails and phone calls, and the applicants who were angriest about being questioned were the ones most likely to be scammers, bank executives said.

A criminal complaint against a man in Hawaii describes a tactic that several bankers said was common — bluster and threats. The man, Martin Kao, obtained $12.8 million in loans from the program by lying about his company’s head count and payroll, according to prosecutors. When a local bank hesitated to approve his application, Mr. Kao barraged its employees with emails, claimed he worked with “very closely” with government officials and demanded to know if the bank’s executives were “willing to get onto a call with Congress.”

A few days later, the bank approved his loan. (Mr. Kao and his lawyer did not respond to requests for comment.)

While the loans that have already sparked criminal cases involve allegations of overt wrongdoing, more complicated questions of eligibility or use of funds will also have to be sorted out.

The issue has already come up in civil suits. In Naples, Fla., a finance executive who sued the Grey Oaks Country Club, alleged as part of his broader suit that it had engaged in fraud by taking a $2.9 million loan. The plaintiff, William Verhelle, lives in a residence at the club and claims Grey Oaks — which charges six-figure initiation dues — violated a rule barring loans to private clubs that limited their memberships for any reason other than capacity.

“I don’t think P.P.P. money was intended for club members to subsidize gourmet dining and spa treatments and golf,” he said in an interview.

Grey Oaks’ board said in a statement that it was confident the club met all requirements. “Obtaining the P.P.P. loan allowed Grey Oaks to bring back 60 employees from furlough, in spite of a significant downturn in its business due to Covid,” the board said.

Some fraud was inevitable, experts said.

“Any time the government is pushing out that magnitude of government assistance, in such a short period of time, at such large scale, it’s going to invite criminals and fraudsters and bad guys who are trying to get their hands on it,” said Tom Miller, the chief executive of Clearforce, a risk-management technology company.

The Paycheck Protection Program’s standards were purposely low: The application did not require borrowers to show a sales drop or other specific injury. They simply had to affirm that “current economic uncertainty makes this loan request necessary.”

And the Treasury Department, which gave banks crucial technical guidance about the program just hours before lending began in early April, urged banks to turn loans around within hours. 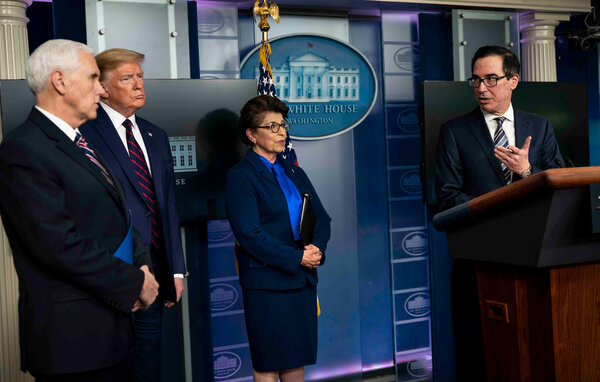 “You get the money. You’ll get it the same day,” Treasury Secretary Steven Mnuchin told borrowers the day before lending began.

To entice lenders to participate, the government allowed them to rely on borrowers’ certifications that they were eligible for a loan and had provided accurate information. So the kind of deep vetting that normally accompanies business loans, including otherwise routine eligibility checks, is being done only now. Receiving a loan “doesn’t mean that S.B.A. has made an affirmative declaration that a borrower is eligible or that it will receive loan forgiveness,” the agency said in a fact sheet published this week.

In an analysis for one large unidentified lender on about 131,000 approved or pending loans, Clearforce found 181 that applicants had recent felony convictions — a clear violation of the program’s rules. If that rate held across all of the program’s 5.2 million borrowers, that would mean about $1 billion in improper loans went to felons, Mr. Miller said.

Some of the fraud won’t come to light until the middle or end of next year, when most borrowers will reach their deadline to seek forgiveness or start repaying the money. Many scammers will simply default; others may be caught when they file a forgiveness application that is reviewed by both the lender and the government.

The Treasury Department pledged to audit all loans over $2 million, and late last month, the Small Business Administration released a questionnaire asking recipients of loans of that size about their 2020 revenue and other questions that seemed aimed at figuring out whether the businesses suffered financial harm because of the pandemic.

Chris Ferris, the chief executive officer of Fidelity Bank, a community bank in New Orleans, said that its smaller loans were mostly flying through the forgiveness process but that none over $2 million had yet been approved. An executive at a community bank in the Midwest, who asked for anonymity to discuss his clients’ accounts, said that none of the nine forgiveness applications that his bank had sent in for loans of $2 million or more had been approved yet, and that the Small Business Administration had asked for additional information on seven of them.

In theory, the government’s guidance on determining eligibility means lenders won’t be penalized for not detecting fraud. But the increased scrutiny has made some nervous that they could be on the hook for bad loans. The Small Business Administration has leeway in deciding which loans it will pay off, and that could leave lenders in the lurch.

“We’re concerned that we’re going to get stuck and have trouble getting our money back from the government on some loans,” said Ira Robbins, the chief executive of Valley National Bank, which made nearly 13,000 loans.

Concerns about fraud and waste have shadowed talks in Congress about reviving the Paycheck Protection Program. As challenging as the program was, many bankers said they would like to see it restarted so devastated businesses like restaurants and entertainment venues could get a second round of help.

“There’s more fraud associated with unemployment payments, and no one is talking about closing the unemployment program,” Mr. Robbins said. “There’s a huge need for more stimulus, and over all, I think the government did a really good job in the speed with which they got this aid out.”