An Iowa jury acquitted a journalist on Wednesday in a highly unusual trial of a reporter who was arrested last spring as she covered a protest against racism and police violence.

Andrea Sahouri, a public safety reporter for The Des Moines Register, was arrested May 31 while covering a sometimes chaotic demonstration near the Merle Hay Mall in Des Moines. Police officers ordered protesters to disperse and used pepper spray against them. Ms. Sahouri, who said she had identified herself as a reporter, was arrested along with her boyfriend at the time, Spenser Robnett, who had accompanied her that day.

Ms. Sahouri, 25, pleaded not guilty to the misdemeanor charges of failing to disperse and interference with official acts, each punishable by up to 30 days in jail. On Wednesday, a six-person jury found Ms. Sahouri and Mr. Robnett not guilty of both charges.

“I’m thankful to the jury for doing the right thing,” Ms. Sahouri said in a statement after the verdict. “Their decision upholds freedom of the press and justice in our democracy.”

She also thanked everyone who had supported her, including her friends, family, and colleagues at The Register and the paper’s parent company, Gannett.

Carol Hunter, executive editor of The Register, said on Wednesday that she was grateful the jury had seen the case as an unjust prosecution of a reporter doing her job.

“Reporters need to be at protests as the public’s eyes and ears, to conduct interviews, take photos and witness for themselves the actions of protesters and law enforcement,” she said in a statement.

Maribel Perez Wadsworth, president of news at Gannett, described the court verdict as a victory for the First Amendment.

The demonstration Ms. Sahouri covered was part of a nationwide movement that sprang up after the death of George Floyd, a Black man who was killed last May while in police custody in Minneapolis.

It is uncommon for journalists in the United States to be arrested while on the job, and rarer still for them to face criminal prosecution. In a Feb. 24 editorial, The Register denounced the charges against Ms. Sahouri as “a violation of free press rights and a miscarriage of justice.”

The trial, which took place at the Drake University Legal Clinic in Des Moines, started on Monday, with Judge Lawrence P. McLellan presiding. It was also livestreamed. 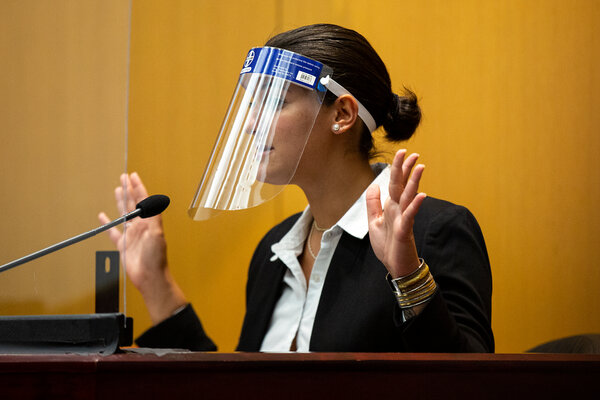 Prosecutors from the Polk County attorney’s office argued that Ms. Sahouri’s job was irrelevant and told the jury to focus on whether or not she and Mr. Robnett had obeyed police instructions. The prosecutors also said that Ms. Sahouri was not wearing press credentials and that she and Mr. Robnett had failed to leave the area despite police orders.

Luke Wilson, a Des Moines police officer, testified that he had arrested Ms. Sahouri because she did not leave the area of the protest, despite police orders. He added that she had tried to move her arm away from him during the arrest. He also said in court that his body camera had failed to record the interaction.

Ms. Sahouri testified on Tuesday that she had not heard police dispersal orders because she was focused on reporting what she considered a historic moment. She said she had retreated from the protest area when she was pepper-sprayed. She also testified that she had told the arresting officer that she was reporting on the event.