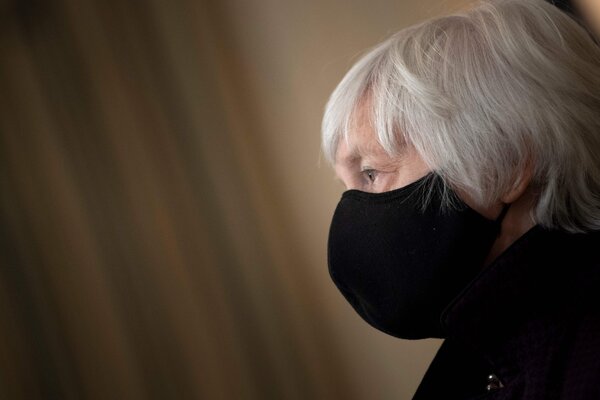 The Treasury secretary opened the DealBook DC Policy Project yesterday, one of the few media interviews she has given since taking the job last month. Although she was typically understated in her conversation with Andrew, she dropped hints about some of her biggest priorities. Here’s what we think she’s planning:

On jobs: Ms. Yellen said that the goal was to “get unemployment down to the levels we enjoyed prior to the crisis.” But she’s looking beyond the headline unemployment rate at bigger, broader numbers, and believes that the government has capacity to take on even more debt — suggesting she’ll push for more stimulus and other policies to goose the economy.

On taxes: Don’t expect Ms. Yellen to support an Elizabeth Warren-style wealth tax. But the Treasury secretary suggested that she might support closing some loopholes in the tax code, including carried interest and, intriguingly, the “stepped up” basis of estate transfers.

On crypto: Ms. Yellen dismissed Bitcoin, calling it an “extremely inefficient way of conducting transactions.” But she said it “makes sense” to consider a so-called digital dollar run by the central bank, in the first comments she has appeared to make about the idea. This could lead to “faster, safer and cheaper payments,” she said, an important statement of intent for crypto regulation in the coming years.

Highlights from the other sessions yesterday:

“It’s not my objective to run Amazon out of town.” The attorney general of New York, Letitia James, talked about protecting people against powerful business interests, including her recent suit against Amazon over workplace safety during the pandemic. “These big tech companies stifle competition, innovation, creativity,” she said.

“Our product is missed.” The C.E.O. of Delta, Ed Bastian, spoke about the future of travel and about when the airline would start selling middle seats again. “The pent-up need and urge and desire to travel is like never before,” he said, though he noted that virus fears would make international travel slower to recover than domestic flights.

“It is troubling to me — very troubling — that people don’t believe government numbers.” Microsoft’s former chief, Steve Ballmer, founded the nonprofit USAFacts to make economic data more accessible and understandable. In a chart-filled chat, he ran down the numbers on economic growth, jobs and more in an attempt to identify priorities for stimulus spending, minimum-wage policies and the like.

To watch video replays of all the sessions, visit our live briefing.

The U.S. reaches a grim pandemic milestone. More than 500,000 people have died from Covid-19, the worst absolute death toll in the world. President Biden marked the moment with a solemn ceremony at the White House.

Facebook and Australia reach a compromise over sharing news stories. The social network agreed to restore users’ ability to post news links after Australia agreed to minor concessions on a law that would require tech platforms to pay for articles that appear on their sites.

BlackRock clarifies its climate change goals. A spokesman for the money-management giant told The Times’s Peter Eavis and Cliff Krauss that its “ambition” was to have its entire investment portfolio reach net zero emissions by 2050. But many corporate giants either haven’t set emissions targets or are struggling to meet their stated goals.

SoftBank nears a settlement with Adam Neumann of WeWork. The Japanese tech giant is close to an agreement to buy half as much of Mr. Neumann’s stake in WeWork than previously agreed. A deal could help pave the way for SoftBank to sell WeWork to a SPAC.

Less than a year after the pandemic doomed an effort to sell Victoria’s Secret to the investment firm Sycamore Partners, the lingerie chain’s owner, L Brands, will again test private equity’s appetite for the business, DealBook has learned.

L Brands’ bankers at Goldman Sachs will begin formally pitching buyout firms about a potential takeover as soon as this week, according to people with knowledge of the matter. L Brands said this month that it was weighing a sale or spinoff of Victoria’s Secret by August, as it focuses on its faster-growing Bath & Body Works division.

In a statement, L Brands’s C.F.O., Stuart Burgdoerfer, said that Victoria’s Secret had “substantially increased its valuation” and that L Brands was still evaluating all options for the business.

Victoria’s Secret has embarked on a turnaround since the Sycamore sale collapsed. A priority has been overhauling its brand, as younger customers shunned its overtly sexy products for alternatives focused on comfort and criticized its marketing as exclusionary.

While sales during the crucial holiday season fell, profitability and digital sales grew. It has closed unprofitable stores and sold a majority stake in its British business.

The brand has also changed up its management after former top executives were accused of misogyny and sexual harassment.

And it has continued to overhaul its marketing, introducing a campaign last year that featured trans, plus-size and older models.

The lingerie market is in demand. A recent investment valued Rihanna’s Savage x Fenty brand at $1 billion, for example. For prospective buyers, Victoria’s Secret remains a well-known label with a sizable market share.

But potential acquirers may have one lingering concern: the continuing investigations and shareholder lawsuits about the ties between L Brands’ chairman, Les Wexner, and Jeffrey Epstein.

— Jennifer Doleac, an economist at Texas A&M, on her research showing a lack of women and underrepresented minority economists presenting at academic seminars. At the same time, new research has found that women at these seminars faced more questions than men and were more likely to receive questions that were patronizing or hostile.

A record SPAC deal gets the cold shoulder

Wall Street has wondered for months what Churchill Capital IV, a nearly $2 billion SPAC, would buy. But after it finally confirmed that it would merge with the electric carmaker Lucid, investors soured on the news — a potential turning point for the blank-check boom.

The deal will take Lucid public at a $24 billion valuation, one of the biggest SPAC transactions to date. To finance the deal, Churchill Capital IV set a record for a so-called PIPE, raising money from Saudi Arabia’s sovereign wealth fund, BlackRock, Fidelity and others.

But Churchill Capital IV’s shares tumbled 30 percent in after-hours trading following the announcement. That wasn’t down to surprise — news reports about a merger with Lucid have been around for weeks — but may instead be rooted in the financial terms of the deal:

The PIPE investors paid the equivalent of $15 per share, a premium to the SPAC’s net asset value, but nearly 75 percent below where Churchill Capital IV’s stock was trading before the announcement. (That said, shares in Churchill Capital IV had soared in recent weeks, thanks in part to recommendations on Reddit forums.)

Andrew’s take: “Hey CCIV investors: You realize the PIPE investors, who actually got to see the books of Lucid, paid $15 a share while they literally watched retail buy at $40 and $50 and $60 a share? I’ve mentioned before these structures can create misalignment. Not always. But sometimes.”

The big question: Is the bloom coming off the SPAC boom? The Lucid deal may turn out to be a good investment in the long term. But any increase in skepticism about blank-check funds could endanger the stratospheric growth in the sector.

In other SPAC news, DealBook’s Lauren Hirsch writes about today’s $8.5 billion deal between Ardagh, which makes cans used by drink brands like LaCroix and White Claw, and a blank-check fund run by the serial SPAC founder Alec Gores.

Among the reasons Treasury Secretary Janet Yellen is skeptical of the promise of Bitcoin (see above) is its energy use. As she told Andrew yesterday, “It’s an extremely inefficient way to conduct transactions and the amount of energy consumed in those transactions is staggering.”

The more Bitcoin is worth, the more energy is burned. “Bitcoin is energy inefficient by its very nature,” Charles Hoskinson, the C.E.O. of the blockchain engineering firm IOHK, told DealBook. “The more its price rises, the more competition there is for the currency, leading its energy requirements to rise exponentially.” So-called miners use computers to solve increasingly complex mathematical puzzles to verify transactions, earning Bitcoin for the work. This consumes huge amounts of energy, equivalent to a midsize country’s power use.

Miners could migrate to renewable power sources, but he cautioned that such operations need cheap and consistent power. And there is an electronic waste issue: Bitcoin mining requires highly specialized equipment that has a short life span and can’t be repurposed.

At the time of writing, the price of Bitcoin is down sharply, nearly 20 percent off the high it set this weekend.

In going-public news: The gaming platform Roblox unveiled its plans for a direct listing, while the health insurer Oscar said it hoped to raise up to $1 billion in its I.P.O., at a valuation of up to $6.7 billion. (Reuters, Bloomberg)

What “nonfungible tokens” are, and why people are paying thousands of dollars for them. (NYT)

Remember Long Blockchain, the onetime iced-tea company that refocused on crypto technology? It was delisted by the S.E.C. for failing to report its financials. (Bloomberg)

Just one U.S. company went public with an all-male board last year. (Bloomberg)

There’s a glut of luxury New York City homes being put up for sale by hedge fund tycoons moving to Florida. (WSJ)

“Is McKinsey losing its mystique?” (FT)