WASHINGTON (Reuters) – A record 22 million Americans have sought unemployment benefits over the past month, with millions more filing claims last week, almost wiping out all the job gains since the Great Recession and underscoring the toll on the economy from extraordinary measures to control the novel coronavirus outbreak.

The deepening economic slump was also amplified by other data on Thursday showing manufacturing activity in the mid-Atlantic region plunged to levels last seen in 1980 and homebuilding tumbling by the most in 36 years in March.

The reports followed dismal reports on Wednesday of a record drop in retail sales in March and the biggest decline in factory output since 1946. Economists are predicting the economy, which they believe is already in recession, contracted in the first quarter at its sharpest pace since World War Two.

“The scale of job losses we have had in the past four weeks is remarkable, nearly all the jobs gained since Great Financial Crisis are now lost,” said James Knightley, chief international economist at ING in New York.

Initial claims for state unemployment benefits dropped 1.370 million to a seasonally adjusted 5.245 million for the week ended April 11, the government said. Data for the prior week was revised to show 9,000 more applications received than previously reported, taking the tally for that period to 6.615 million.

A total of 22.034 million people have filed claims for jobless benefits since March 21, representing about 13.5% of the labor force. Employment bottomed at around 138 million in December 2010 and peaked at 158.8 million in February. At face value, the staggering claims numbers set the economy on course for job losses of more than 1 million in April.

But a historic $2.3 trillion fiscal package signed by President Donald Trump last month made provisions for small businesses to access loans that could be partially forgiven if they were used for employee salaries.

“Still, the labor market has imploded,” said Gus Faucher, chief economist at PNC Financial in Pittsburgh, Pennsylvania. “Claims have totaled 22 million, and claims will be in the millions again next week.”

States and local governments have issued “stay-at-home” or “shelter-in-place” orders affecting more than 90% of Americans to control the spread of COVID-19, the respiratory illness caused by the virus, and abruptly halting economic activity.

The Labor Department said “the COVID-19 virus continues to impact the number of initial claims.”

Economists are divided on whether the second straight weekly decline in claims suggests filings peaked at a record 6.867 million in the week ended March 28, or that overwhelmed state employment offices were unable to process the flood of applications. Jobless claims, the most timely data on the economy’s health, are being closely watched for clues on the depth of the downturn, when the waves of layoffs may let up and when a recovery might start.

Stocks on Wall Street were mixed as investors focused on the second straight weekly drop in claims. The dollar .DXY was higher against a basket of currencies. U.S. Treasury prices rose.

In a separate report on Thursday, the Commerce Department said housing starts plunged 22.3% to a seasonally adjusted annual rate of 1.216 million units last month. That was the largest monthly decline in starts since March 1984.

The Philadelphia Federal Reserve also reported that its measure of business conditions in the mid-Atlantic region dropped to a reading of -56.6 in April, the lowest reading since July 1980, from -12.7 in March.

Economists are estimating the economy contracted as much as 10.8% in the first quarter, which would be the steepest drop in gross domestic product since 1947. They say the massive fiscal package will likely provide little cushion for the economy.

“The economy is in a downward spiral where job losses beget job losses and the federal government emergency relief checks will not be enough to turn the tide,” said Chris Rupkey, chief economist at MUFG in New York. “The recovery is looking less V-shaped by the day as the deeper we fall, the harder it will be for the nation to climb back out of this deep hole the pandemic has dug for the economy. The worst is yet to come.” 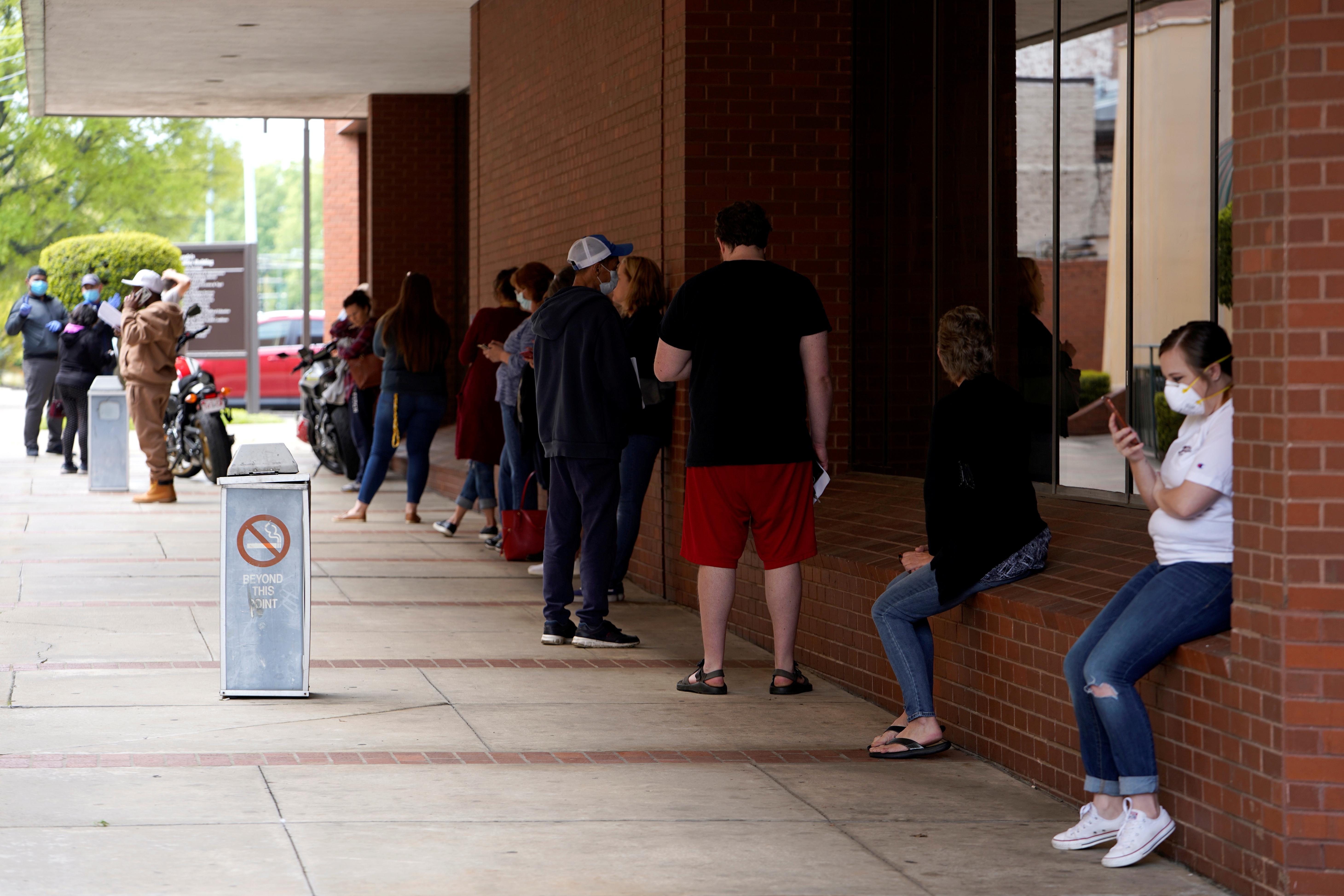 The National Bureau of Economic Research, the private research institute regarded as the arbiter of U.S. recessions, does not define a recession as two consecutive quarters of decline in real GDP, as is the rule of thumb in many countries. Instead, it looks for a drop in activity, spread across the economy and lasting more than a few months.

Thursday’s claims report also showed the number of people continuing to receive benefits after an initial week of aid surged 4.530 million to a record 11.976 million in the week ending April 4.

The so-called continuing claims data is reported with a one-week lag and is viewed as a better gauge of unemployment. Economists expect the unemployment rate in April will blow past the Great Recession’s peak of 10.0% and the post-World War Two high of 10.8% touched in December 1982.