When the University of Denver reopened for classes this fall, there was a new building on campus next to the student athletics center: a coronavirus testing center created using modular construction.

Students and staff can either walk up or drive up to have their temperatures screened or to receive a virus test at one of six windows at the center, a 40-foot-long building manufactured out of state in a factory and shipped to Colorado on a flatbed truck. Proponents say the method is faster and greener than conventional construction.

“With modular, we can build more quickly and have better quality control, while reducing waste and our carbon footprint,” said Andrew Ahrendt, director of national manufacturing at PCL Construction, a group of independent general contracting companies that manufactured the testing site, known as the Citizen Care Pod.

Modular construction has been growing in popularity among developers as a method for building multifamily housing, hotels and workplaces. The pace of hospitality and office projects has slowed in 2020 as a result of the pandemic, and many developers have turned instead to medical buildings, affordable housing and data centers.

Behind the push has been an effort to address the health concerns of businesses and schools trying to operate safely. Earlier this year, for example, modular hospitals were built in Wuhan, China, in less than two weeks.

The testing pod at the University of Denver, built in collaboration with WZMH Architects and Microsoft, can be enabled with sensors and cameras that can detect the temperature of people wearing masks and standing six feet apart. The pod was built in 10 days in a factory in Bakersfield, Calif., and took one day to set up at the university.

PCL has made similar care pods used at the University of California Los Angeles and Vancouver Airport. It also manufactures a modular visiting pod for senior residences with a ventilated, sanitized space for visitors to spend time with residents. 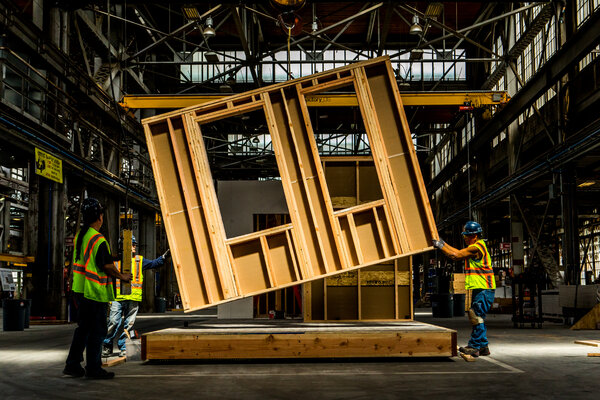 A type of prefab construction, the modular method ranges from manufacturing components such as panels and walls to full units such as kitchens and bathrooms in a factory and then assembling them on location like large Lego pieces.

“Modular makes sense for projects with a high volume of discrete and repeatable units,” said Scott L. Robinson, an assistant professor at the Schack Institute of Real Estate at New York University.

Modular construction can speed up construction by as much as 50 percent and cut costs by 20 percent, according to a 2019 report by the consulting firm McKinsey & Company, which estimated that modular construction could grow to a $130 billion industry in the United States and Europe by 2030. Upfront building costs of modular and traditional projects may be similar, but the savings come from the accelerated building timeline.

“Modular allow us to be more efficient and increase construction labor productivity,” said Steffen Fuchs, a partner at McKinsey.

The construction method accounts for about 5 percent of all new projects in both commercial and residential real estate, said Ryan Smith, the director of the School of Design and Construction at Washington State University.

“Between 2015 and 2020, we have seen a doubling of market share for modular construction in multifamily projects,” he said, adding that many three- to four-story modular multifamily buildings have cropped up around Puget Sound in Washington, in the San Francisco Bay Area and near Philadelphia.

But the industry has faced challenges in the economic slowdown caused by the pandemic. Financing has been difficult to find. Labor shortages have been an issue, too.

“Early on, we were always missing people” because of quarantines, said Gilbert Trudeau, president of RCM Group, a modular construction firm in Montreal. Still, he said, business has not slowed; the company recently finished a modular Hampton Inn in Verona, N.Y.

Before the pandemic, modular hotel construction was growing rapidly thanks to prominent projects like the $100 million, 19-floor CitizenM Bowery hotel that opened in Manhattan in 2018. Since 2015, Marriott has used modular construction in more than 70 hotels in North America.

“We can shave off six months of development, so instead of 18 to 20 months, we’re opening in closer to 12 months,” said Eric Jacobs, the chief development officer for Marriott Select Brands in North America.

In 2019, Marriott started construction on a 26-story, 168-room hotel in Manhattan, which will have prefabricated guest rooms, assembled and furnished off site with bedding, flooring and even toiletries. And when the stalled AC Hotel NoMad finally opens in 2021, it will be the largest modular hotel in the world.

As some sectors have slowed, the demand for multifamily and single-family homes, particularly affordable options in those categories, has only increased.

The modular firm Factory OS has attracted funding from large tech companies to use modular construction to create affordable housing. The firm raised $55 million in November from Autodesk, Facebook, Google and others. Factory OS has created market-rate housing, including corporate housing, and was involved in building the hospitals in China earlier this year.

Eco-friendly materials like mass timber are a major selling point for many modular construction projects. Mithun, an architecture firm based in Seattle, has paired up with Forterra, a nonprofit conservation organization, to create affordable modular housing in Tukwila, Wash., out of laminated timber for a community of East African immigrants. The project, which will open in 2022, will include about 100 residences, a marketplace and community spaces.

“As cities’ budgets have been squeezed even further this year, cost-efficient options for affordable housing have grown even more critical,” said Craig Curtis, a partner at Mithun.

Retailers and restaurant chains have adopted modular construction, too. In October, Chick-fil-A opened its first modular location, replacing a restaurant in Roswell, Ga. Six separate modules — including the restaurant’s kitchen, drive-through counter, serving area, office and restrooms — were built in Conyers, Ga., by Frey-Moss Structures, which has also created modular buildings for Harley Davidson and TD Bank. The team completed the construction of Chick-fil-A approximately six weeks sooner than it could have through traditional construction methods.

Despite its growth, the industry still faces criticism about the quality and creativity of its projects. But experts say such complaints are overblown.

“Many developers are choosing modular construction because of a higher degree of quality, cost certainty and schedule certainty,” said Tom Hardiman, the executive director of the Modular Building Institute. And the process benefits from customization, he said, comparing it to automobile manufacturing, in which customers can choose various parts to create their dream car.

In fact, manufacturers are taking a page from the automobile industry by increasing the amount of automation and robotics in their factories. Technological advances may also help address the labor shortage, particularly among younger employees. “If you can talk about the technology involved, whether that’s automation or robotics, you have a chance of appealing to millennials,” Mr. Hardiman said.

And modular construction is highly adaptable, allowing developers to address the changing needs of people and organizations navigating the pandemic. The Citizen Care Pod at the University of Denver, for instance, could have another function next year: “It has the necessary refrigeration and technology to be converted into a vaccine dispensary,” Mr. Ahrendt of PCL said.