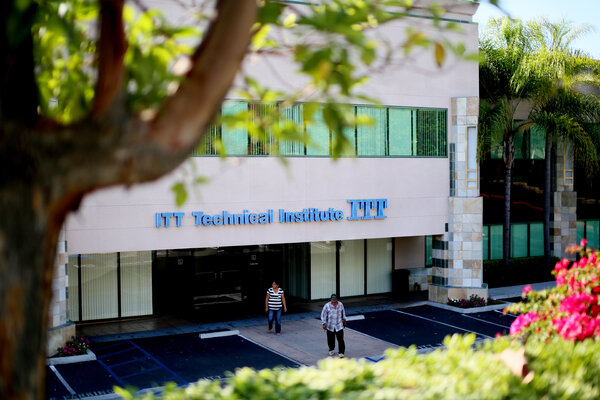 The Education Department wiped out more than $500 million in student loans on Wednesday, in its first step toward unclogging a badly backed-up relief program for students who were scammed by their schools.

For the first time in more than four years, the department approved new grounds for claims through the so-called borrower defense program, canceling debts for 18,000 applicants who attended ITT Technical Institute, a for-profit chain that abruptly collapsed in 2016. The program allows students who were defrauded by their schools to have their federal student loans forgiven.

“Our action today will give thousands of borrowers a fresh start and the relief they deserve after ITT repeatedly lied to them,” Education Secretary Miguel Cardona said.

Eileen Connor, the legal director of the Project on Predatory Student Lending, a group that has won court victories against the department over its handling of borrower defense claims, praised Wednesday’s announcement but said Mr. Cardona needed to go further.

“The department needs to address the more than 700,000 borrowers with over $3 billion in fraudulent debt from ITT,” Ms. Connor said. “We cannot ask these borrowers to wait another day or pay another dollar toward federal student loans that never should have been made in the first place.”

The borrower defense program had languished for much of the past four years. In January 2017, at the tail end of the Obama administration, the department granted claims from some students who attended ITT’s California campuses — a move that many hopeful applicants saw as a sign of relief to come.

But the relief program essentially stopped functioning for much of President Donald J. Trump’s administration. Betsy DeVos, his education secretary, denounced the system as a “free money” giveaway and repeatedly chipped away at the protections it offered. Then, in her final year in office, she rejected more than 130,000 borrowers’ claims after reviews lasting just minutes. Tens of thousands more claims languished for years.

Mr. Cardona has promised to reverse that tide. “Many of these borrowers have waited a long time for relief, and we need to work swiftly to render decisions for those whose claims are still pending,” he said.

Nearly 108,000 applicants who say they were defrauded by their schools are still awaiting decisions. The department has not yet announced whether it will take on the thorny question of revisiting Ms. DeVos’s denials.