The High Costs of the Airline Bailouts 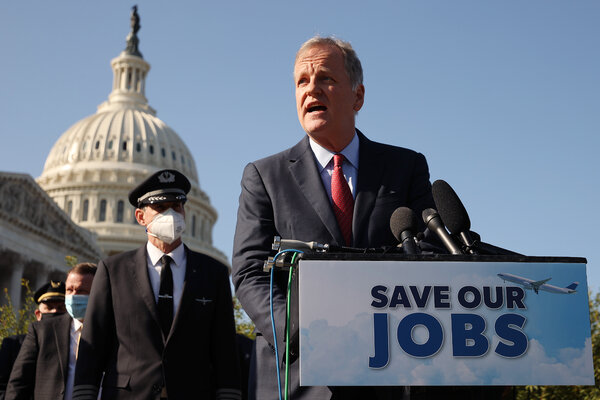 Major U.S. airlines have received more than $50 billion in grants in multiple rounds of taxpayer-funded bailouts during the pandemic. As travel begins to rebound and the stock market cruises to record highs, Andrew asks in his latest column: Was the rescue worth it?

The good news: The bailouts probably saved as many as 75,000 jobs and kept the airlines from declaring bankruptcy.

The bad news: Taxpayers probably overpaid, with the original grant of $25 billion implying that each job cost the equivalent of more than $300,000. (That price grew with subsequent bailouts.)

The biggest beneficiaries were airline shareholders. That includes the carriers’ executives, who have been paid in stock for years. Propped up by taxpayers, airline stocks are up nearly 200 percent from their pandemic trough, and have largely recovered their losses.

Was it really necessary? No other industry received more government help during the pandemic. But private investors seem willing to throw money at everything these days, and the Fed’s stimulus kept the credit markets open.

U.S. airlines were able to issue more than $30 billion in bonds last year, in some cases backed by their loyalty programs.

United Airlines invested $20 million last month in an electric air taxi company that went public via a SPAC. It received a third government rescue payment after the deal.

We’ll never know what would have happened without the bailouts. The airlines say the government grants were crucial: As American Airlines put it, they “saved thousands of airline jobs, preserved the livelihoods of our hard-working team members and helped position the industry to play a central role in the nation’s recovery.”

There are conditions attached to the rescues, including halting share buybacks and limiting C.E.O. pay. But other things, like stock warrants issued to the government, are worth a small fraction of the grants the airlines received (unlike the majority equity stake that the government took when it rescued G.M. as part of its bankruptcy in 2009).

The debate about the appropriateness of the bailouts is just beginning, Andrew writes. “After the banking crisis of 2008 led to bailouts, the recriminations began when firms like Goldman Sachs had a banner year in the aftermath — and paid bankers record bonuses.” Will the same thing happen to the airlines?

Uber will classify British drivers as “workers.” The ride-hailing service’s decision will entitle more than 70,000 drivers to a minimum wage, vacation pay and access to a pension plan, but stops short of making them employees. It comes in response to a British Supreme Court ruling last month.

Wall Street firms plan for in-office workers. JPMorgan Chase expects summer interns in New York and London to work at the office. And Ralph Schlosstein, the co-C.E.O. of Evercore, told Bloomberg Television that he hoped to have some summer trainees “at least be partly in the office.”

The F.T.C. weighs a tougher approach for pharma mergers. The regulator plans to revamp its process for reviewing deals involving drug makers, following an investigation by Representative Katie Porter, Democrat of California, into the impact of consolidation. It’s the latest sign of the Biden administration’s stance on antitrust.

Treasury Department opens a racial equity review. It will examine its policies in an effort to ensure economic fairness, a priority of Treasury Secretary Janet Yellen. The review will be led by Adewale Adeyemo once he is confirmed as deputy Treasury secretary.

The buyer of Jeffrey Epstein’s Manhattan mansion is revealed. Michael Daffey, a former Goldman Sachs executive, paid $51 million for the residence after racking up big gains on Bitcoin.

Amalgamated Bank, the New York-based lender with a history of supporting progressive causes, plans to announce this morning that it will endorse H.R. 40, legislation calling for a federal commission to study the lingering effects of slavery — and the merits of providing reparations.

The lender came to support the bill after racial justice protests last year. Lynne Fox, Amalgamated’s chair and interim C.E.O., told DealBook that the protests convinced the bank’s leaders that they needed to address structural racism with “systemic changes” to society. The bank, which has $6 billion in assets, has previously embraced policies that it said would help reduce gun-related violence.

H.R. 40, named after the federal government’s promise to give freed families “40 acres and a mule,” was first proposed over 30 years ago. Its current lead sponsor is Representative Sheila Jackson Lee, Democrat of Texas, and its 169 co-sponsors are all Democrats. (President Biden has endorsed forming a committee to study reparations, but he has not committed to signing the bill should Congress approve it, which isn’t assured.)

A bank’s support is symbolically important, Ms. Fox said: “We acknowledge — and I think others in the financial industry need to acknowledge — the deep-rooted connections between the American financial sector and the slave economy.” Bank executives have noted that their firms’ histories have included financing slaveholders, and admitted more recently to racial discrimination against employees and customers. Lenders are under increasing pressure to promote racial equity, including by shareholders.

For her part, Ms. Fox declined to criticize other lenders directly. “We don’t see ourselves as judging other institutions’ conduct,” she said. “Talking is a good first step. We look forward to when other concrete steps are taken.”

Amalgamated has moved to address racial equity within its walls, Ms. Fox said. Those steps include reviewing wage policies, forming an employee-led committee to review policies and practices, and providing antiracism training. In its statement endorsing H.R. 40, Amalgamated pledged to do more: “We believe the commission created through H.R. 40 is an important first step towards achieving racial justice. The work shouldn’t stop there.”

“Our core asset market stance has been to ‘keep the faith’ on cyclical assets.”

— The Goldman Sachs strategists Dominic Wilson and Vickie Chang, in a research note explaining why their “bullish growth forecasts are still not fully reflected in asset prices.”

A home run for the owners of the Boston Red Sox

While the addition of LeBron James as a co-owner of Fenway Sports Group — the owner of the Red Sox, the English Premier League’s Liverpool soccer club and more — grabbed headlines yesterday, an investment in the group by RedBird Capital Partners may be more noteworthy.

RedBird paid $750 million for an 11 percent stake in F.S.G., at a $7.3 billion valuation. That’s a huge gain for F.S.G.’s existing leaders, John Henry and Tom Werner, who paid just over $1 billion for the Red Sox and Liverpool. It will bring on board Gerry Cardinale, the head of RedBird and a former Goldman Sachs deal maker.

RedBird’s investment came after its earlier plan to buy at least a quarter of F.S.G. through its SPAC fell through.

The funds could help the group make big purchases. The Boston Globe reports that F.S.G.’s wish list includes an N.F.L. or N.B.A. team, as well as a sports betting company.

Mr. James is getting a 1 percent stake in F.S.G. without paying a dime, Axios’s Dan Primack reports. The Times notes that the N.B.A. star already had a relationship with F.S.G.: Its affiliate, Fenway Sports Management, gained Mr. James’s global marketing rights in a 2011 deal that gave him a stake in Liverpool.

Mr. Primack, an avowed Boston sports fan, notes the “certain amount of sacrilege” involved: Mr. Cardinale was a top adviser to the Red Sox’s archrivals, the New York Yankees, and Mr. James grew up a Yanks fan. But that’s business.

Work woes may hasten a manager’s demise, according to an academic study on C.E.O. stress, aging and death. The research found that anxiety at work affects an executive’s longevity and looks, and there’s a lesson for all workers, Marius Guenzel of Wharton, one of the authors, told DealBook.

“You only have one life,” Mr. Guenzel said. When making career choices, it’s worth thinking about the negative effects of work stress, he said, pointing out that C.E.O.s can illuminate this because their work troubles are not entangled with fears for their personal finances.

The study examined 1,600 C.E.O.s working in the 1980s, as states were gradually passing anti-takeover laws seen as making the job easier. It found that C.E.O.s who faced even one year less of takeover anxiety lived longer, healthier lives.

Bad times in business manifest physically. C.E.O.s working in distressed industries during the 2008 financial crisis also looked roughly one year older than executives of the same age who did not face similar problems, the study found. “Industry-level distress shocks” cause “visible signs of accelerated aging,” it concluded, based on an A.I. analysis of images.

EToro, an online brokerage, plans to go public by merging with a SPAC at a $10 billion valuation. (Reuters)

Exxon said that proposals by the investment firm Engine No. 1 threatened its financial outlook. And the power company FirstEnergy gave two board seats to Carl Icahn. (Bloomberg, Cleveland Plain Dealer)

Google followed Apple in cutting some commissions in its app store, though an analysis suggests it’s not giving up much revenue. (NYT, CNBC)

Lawmakers called to reconsider the F.T.C.’s decision a decade ago not to sue Google over alleged antitrust violations, following the release of internal documents. (Politico)

“This Is Your Brain on Peloton” (NYT)