For those who wondered how Mr. Murdoch, the octogenarian media magnate with a conservative streak, would react to the electoral defeat of President Trump, the past few days have brought a complicated answer, well-suited to the mercurial nature of Mr. Murdoch’s world.

The New York Post, the Murdoch tabloid that attacked Joseph R. Biden Jr. and his son Hunter before the election, splashed a beaming Mr. Biden on its Sunday cover — “IT’S JOE TIME” — and described Mr. Trump as “downcast” and misguided in his efforts to claim the election was a fraud. The Sun, Mr. Murdoch’s outpost in London, reached new heights of Fleet Street ingenuity by comparing the president’s defeated visage to a crumple of skin on the actress Famke Janssen’s kneecap.

The Wall Street Journal, which had rejected The Post’s attack on Hunter Biden, has dismissed Mr. Trump’s fraud claims, and its conservative opinion page is nudging the president toward a gracious concession. Fox News — home to “Hannity” and “Fox & Friends,” instigators and nurturers of Mr. Trump’s rise — refused to retract an election night projection of a Biden win in Arizona despite intense pressure from Mr. Trump’s aides, who reached Mr. Murdoch in England to plead their case.

And yet, just as a Murdoch-Trump divorce appeared to be underway, Fox News’s prime-time stars — who have operated more or less on their own since the exit of the network's co-founder Roger Ailes — have embraced parts of Mr. Trump’s sully-the-results strategy, even knocking colleagues who have portrayed Mr. Biden, accurately, as the election’s victor. 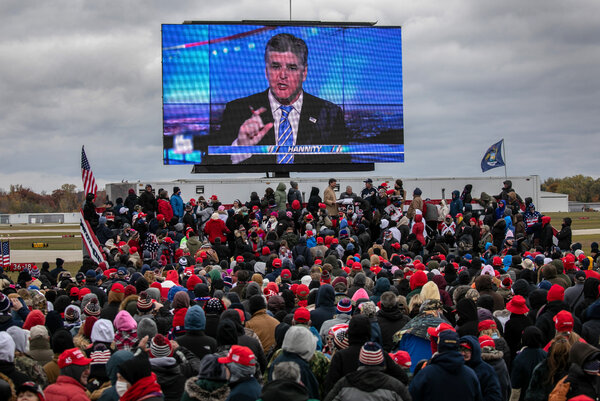 “Many people have not called Arizona,” Sean Hannity told viewers on his Monday night show, before lobbing a dagger at the Fox News decision desk: “Those that called early made a huge mistake.” Mark Levin, a right-wing radio star with a weekend Fox News show, attacked the “Fox News Sunday” anchor Chris Wallace for calling Mr. Biden the clear winner. And Tucker Carlson took a not-so-veiled swipe on Monday at his Fox News colleague Neil Cavuto, who had won the hosannas of Liberal Twitter by cutting off an appearance by Mr. Trump’s press secretary and saying he could not “in good conscience” broadcast her fictive claims about voter fraud.

“In a democracy, you cannot ignore honest questions from citizens,” Mr. Carlson said. “You can’t just cut away from coverage you don’t like.”

Efforts to understand Mr. Murdoch’s media universe are often compared to Kremlinology. But interviews with former and current associates of Mr. Murdoch suggest that his response to Mr. Trump’s loss can be summed up by another Cold War term: realpolitik.

“He will do as he has done in other cases,” said one former consigliere, “which is adapt to a new reality.”

Mr. Murdoch, who has presided over newspapers and television networks for more than 50 years, knows that opportunity awaits no matter who is temporarily in power: Some of Fox News’s highest ratings and profits came during the Obama administration, when the network was a gathering spot for dismayed conservatives, the same phenomenon that fueled MSNBC’s success with liberals in the Trump age.

“Fox News Channel has been on the air since 1996,” said Christopher Balfe, a right-wing media impresario who has developed digital ventures for conservative stars, including the former Fox News host Megyn Kelly. “They’ve been around for multiple presidents and they’re going to be around for multiple more.”

Fox News reached new heights of influence in the Trump era — it was the highest rated network in all of prime-time television this past summer — but it’s easy to forget it was the No. 1 cable news channel long before the New York real estate developer rode an escalator to the political stage. Many Fox News employees believe the network’s ratings are likely to surge again as an anti-Biden audience seeks succor.

“They don’t tend to back losers,” one longtime Murdoch lieutenant observed of the family. “They don’t like to be on the losing side of issues and political campaigns.”

To that point, Mr. Murdoch’s publicists — who declined to comment for this article — conspicuously confirmed rumors last month that the mogul did not expect Mr. Trump to recapture the presidency. And several people who have worked with Mr. Murdoch said he harbored no malice toward Mr. Biden and had even expressed some admiration of the former vice president on occasion.

It would not be the first time Mr. Murdoch has stayed loose to maintain influence with whoever comes into power. In England, he became an ally of the Labour prime minister Tony Blair, despite years of backing Tory rule. The Biden administration is likely to handle regulatory disputes that could affect Mr. Murdoch’s domestic assets, which include sports and entertainment networks as well as Fox News, The Journal, and The Post.

Last week, Fox News was upfront with viewers about Mr. Trump’s poor chances, standing behind its Decision Desk call in Arizona and, on Saturday, trumpeting the network’s projection that Mr. Biden would be the 46th president.

But the recent hesitation of Senator Mitch McConnell and other Republican leaders to acknowledge Mr. Biden’s victory may have complicated the equation for the network’s opinion stars, who are loath to end up on the liberal side of the mainstream conservative line.

Some prime-time personnel, protective of their ratings success, were unnerved after seeing some viewers turn against the network after the Arizona call; one group of protesters chanted “Fox News sucks!” outside a tabulation center in Phoenix.

On Monday, Mr. Hannity and Mr. Carlson stoked Mr. Trump’s shadowy narrative of a suspicious election. “The Washington swamp, Joe Biden, all desperate, they want to just call it a day and stop you from asking legitimate, tough questions about the election,” Mr. Hannity thundered to viewers.

Still, Mr. Hannity left himself options: His criticism of Democrats and the “swamp” is a familiar line of Fox News attack that can be easily adapted to a Biden presidency.

And Mr. Carlson stopped short of uttering what Mr. Trump would most like to hear: that he was the true victor last Tuesday.

“If, after all the questions have been answered, it becomes clear that Joe Biden is the legitimate winner of the presidential election, we will accept that and will encourage others to accept it, too,” Mr. Carlson said.

Last week, Laura Ingraham, who attended Mr. Trump’s election night appearance at the White House, even floated the possibility of “an unfavorable outcome in this election”— the sort of acknowledgment of an unwelcome reality that Mr. Trump abhors. “If and when that does happen,” Ms. Ingraham counseled, Mr. Trump ought to concede with “grace and composure.” It was a pep talk for the Audience of One.

The prospect of Mr. Trump starting his own media platform as a competitor to Fox News is often cited as a reason for Rupert Murdoch to keep the president close. But there are myriad hurdles before such a venture could get off the ground.

Mr. Trump, a connoisseur of traditional media, may balk at the sort of online-only service that the former Fox News host Bill O’Reilly pursued. Fox News is available in far more households than One America News, a right-wing network often cited as a potential vessel for Trump TV. Cable providers like Comcast and Spectrum would need to agree to carry a new Trump-oriented network, and regulations make it difficult for existing channels to abruptly change formats.

“I don’t think there’s a fear among conservative media,” said Mr. Balfe, the right-wing media consultant, “that Biden winning is going to hurt.”