Will New York Go for Another Wall Streeter as Mayor?

Want this delivered to your inbox each day? Sign up here.

The veteran deal-maker Ray McGuire announced Thursday that he was stepping down as Citigroup’s vice chairman to join the crowded race for New York City mayor. His fellow finance executives sing his praises, but it’s unclear whether that helps or hurts his bid to run a city whose voters have shifted away from the centrist politics of leaders like Mike Bloomberg toward the progressive views of Representative Alexandria Ocasio-Cortez.

Mr. McGuire is well-connected on Wall Street — and beyond. Raised by his single mother and grandparents in Dayton, Ohio, he won a scholarship to the private Hotchkiss School and then earned three degrees from Harvard. Mr. McGuire then became an M.&A. rainmaker at First Boston, Morgan Stanley and Citigroup, which he joined in 2005 as global co-head of investment banking.

• He has close ties to Black civic and political leaders, including the Rev. Al Sharpton and the former top Obama administration official Valerie Jarrett. He has spoken out about social justice issues, saying “I could easily be George Floyd” and calling Mr. Floyd’s death “coldblooded murder.”

His pitch is fixing New York City’s economy. He is focusing on the city’s fragile financial state as it faces a $9 billion revenue shortfall. “New York is in a financial crisis that has exploded into a whole bunch of crises — educational, health and criminal justice,” he told The Times. “If there is a moment in history where my skill set can help lead, this is it.”

Fellow financial executives are big supporters. “We need someone who is going to walk into the room and say, ‘Let me see the spreadsheets, and let’s deal with the crisis at hand,’ ” said Bill Lewis, a co-chairman of investment banking at Lazard who has known Mr. McGuire since they were undergraduates at Harvard. The former Infor C.E.O. Charles Phillips, whom Mr. McGuire met when the two were at Morgan Stanley, is a co-chair of his campaign.

But those ties could hurt him with left-leaning voters. Mr. McGuire has resisted comparisons to the last financial tycoon to run for mayor, Mr. Bloomberg, and supporters point to his socially liberal credentials. But New York’s Democrats have moved leftward, as the party’s primary elections this year showed, and may resist having another Wall Streeter in Gracie Mansion.

• Mr. McGuire is opting out of the city’s public finance system, which allows him to accept larger donations and avoid limits on spending — but that could increase skepticism of his run among the party’s progressive wing.

🗽 For more about Mr. McGuire’s candidacy, check out the latest edition of our sister newsletter, New York Today. 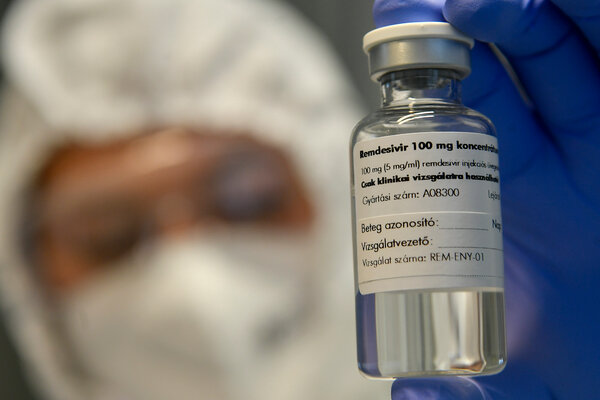 Republicans fight over a stimulus package. President Trump said that he “would go higher” than the $1.8 trillion proposal his administration has put forward in negotiations with Democrats. But Senator Mitch McConnell, the majority leader, said that would be “a much larger amount than I can sell to my members.”

Pfizer will not seek approval of its coronavirus vaccine until late next month. It’s a shift in tone for the drug maker, which had previously emphasized the month of October, aligning itself with Mr. Trump’s push for a vaccine before the Nov. 3 election. In other vaccine news, Gilead’s high-profile antiviral drug, remdesivir, failed to prevent deaths in a 11,000-person W.H.O. study. The company disputed the findings.

Europe’s aviation regulator says the Boeing 737 Max is safe to fly again. It could return to service in the region before the end of the year, Bloomberg reports. Analysts expect U.S. regulators to allow the plane to return to the skies early next year; it has been grounded since March 2019, following two crashes that killed 346 people.

Twitter reverses course on a New York Post story about Joe Biden. It will now allow the unverified story to be shared, after originally banning it, but will add a label to provide context about the source of the information. Republicans on the Senate Judiciary Committee said they would subpoena Jack Dorsey, Twitter’s chief, to answer questions about it.

Businesses push back on a Trump executive order limiting diversity training. In a letter to the White House, more than 150 companies and nonprofit groups, including the U.S. Chamber of Commerce, said the order was having a “broadly chilling effect on legitimate” training programs. Earlier in the day, the Business Roundtable (which also signed the letter) announced a range of actions that C.E.O.s of the country’s largest companies pledged to put in place to “advance racial equity and justice.”

When will offices be full again?

Many companies don’t expect their workers to return to offices until next summer, and even then things may never be the same as before, judging by the comments executives made this week.

Offices are still mostly empty. On earnings calls, executives from Goldman Sachs said that about a third of workers in New York and London were coming in regularly; at JPMorgan, it’s around 20 percent in both cities; and Citigroup said “a small percentage” of employees in North America had returned.

• ”Being together enables greater collaboration, which is key to our culture,” said David Solomon, Goldman’s chief.

They may never return to their previous capacity. Jamie Dimon of JPMorgan acknowledged that some working habits may have changed permanently, which “will ultimately reduce the space you need for your employees.” Terrance Dolan, the finance chief at U.S. Bancorp, told analysts that the bank will most likely “consolidate” its corporate real estate.

Is that a problem? Steven Goulart, the chief investment officer at MetLife, said at an S.E.C. round table that the “pressure to de-densify” offices to support social distancing could support demand for real estate even if buildings aren’t as full as before. (See, for example, the interest in low-rise “groundscrapers.”)

• As executives conduct more business remotely, going back to in-person meetings and pitches seems less urgent. Natarajan Chandrasekaran, the chairman of Indian conglomerate Tata Sons, said in an interview with The Times that he used to fly from India to the U.S. to pitch a $50,000 project. But recently, he said, his firm’s consultancy business closed $2 billion worth of deals in “five or six Zoom calls.”

Some of the academic research that caught our eye this week, summarized in one sentence:

• The stock market isn’t the economy, and here are the numbers to prove it. (Frederik Schlingemann and René Stulz)

• Income and wealth inequality in the U.S. is getting worse, and those who say it’s not as bad as initially thought are wrong. (Emmanuel Saez and Gabriel Zucman)

Reeves Wiedeman is a contributing editor at New York magazine and the author of the book “Billion Dollar Loser: The Epic Rise and Spectacular Fall of Adam Neumann and WeWork,” which comes out next week. It’s been a year since Mr. Neumann was ousted from the co-working company he founded, seemingly with billions in tow.

Mr. Wiedeman talked to DealBook about the man, the myth and the money.

We have to start with the title of the book.

There were two reasons for the title. Neumann became a theoretical billionaire at the moment when his company failed. “Billion Dollar Loser” captures that contradiction and speaks to larger themes. WeWork lost billions in pursuit of growth, but it wasn’t alone. It was typical of an era that may seem distant during the pandemic, when investors really believed in unicorns, a time that might not be over. SoftBank backed WeWork and is now subsidizing DoorDash, which is planning an I.P.O., in the hope the financials will someday make sense.

So, was Mr. Neumann sincere or just selling a story for a fortune?

I thought a lot about his sincerity and talked to many people. Was it just a sales pitch?

He took the decent but ordinary business of co-working and gave it a feeling of magic with charisma and a founding myth. Neumann’s time on a kibbutz gave him a useful talking point, and WeWork’s buzzword — community. Community is something we all want. Ultimately, WeWork learned community is hard to scale and maintain around the world. But I came to believe that he believed the story that he was changing the world and was more qualified than governments to solve its big problems. This thinking is endemic to Silicon Valley and venture capitalism. Neumann was just more open about expressing his grand ambitions.

What should we make of this epic tale of success and failure? Are there lessons?

Well, I hope people don’t read the story like a how-to. I didn’t intentionally write a guide to being an ambitious entrepreneur. But it could be read that way.

For me, as someone who is conservative about career choices, the lesson is that it is worth thinking about taking risks, in addition to knowing when to stay the course. Generally, it may be that we need to think about how we define success culturally. We only pay attention to growth, not to satisfaction. But you can build very nice businesses without trying to be a world-famous billionaire. And, interestingly, when I talked to Neumann’s competitors, I discovered most weren’t jealous of him even when he was at his most successful.

Is “loser” a temporary judgment? Could Mr. Neumman “win” again?

He promised and wanted a lot and it was hard to deliver. But given his ambition, charisma and work ethic, he won’t retire early. I think people will give him a second chance.

“The medium to longer term is still highly uncertain in particular as it relates to future stimulus. And so we remain heavily weighted to our downside scenarios.” — Jennifer Piepszak, the C.F.O. of JPMorgan Chase

“The consumer number in my view is going to be highly dependent on whether they provide more fiscal stimulus, which I think they absolutely need to do.” — William Demchak, the C.E.O. of PNC Financial Services

“For both sides, I think what they need to keep in mind is that there are Americans that need them, that don’t really care about politics, aren’t really tied up in this election and they just need some help.” — Doug McMillon, the C.E.O. of Walmart, on CNBC

• Blackstone plans to sell BioMed Realty Trust, which supplies office space to health care companies, from one of its funds to another at a $14.6 billion valuation. (Reuters)

• Blank-check funds have accounted for nearly half of proceeds raised by I.P.O.s in the U.S. last quarter, and well over 40 percent of money raised so far this year. (EY)

• The Trump administration rejected California’s request for federal aid to clean up the damage from recent wildfires. (L.A. Times)

• Amazon said that third-party merchants earned over $3.5 billion from this year’s Prime Day, but the company didn’t disclose total sales from the two-day event. (CNBC)

• Google’s former C.E.O., Eric Schmidt, called on the U.S. to adopt a national strategy to compete with China on A.I. (Politico)

• The latest training for retail store workers: how to handle fights between customers over face masks. (NYT)

• “A lot of your children and grandchildren do not respect your work”: The writer Anand Giridharadas let rip at the National Association of Corporate Directors’ annual summit. (Business Insider)