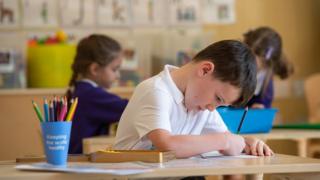 A £1bn fund to help England’s children catch up on what they have missed while schools have been closed has been announced by the prime minister.

The most disadvantaged pupils will have access to tutors through a £350m programme over the next academic year.

Primary and secondary schools will be given a further £650m to spend on one-to-one or group tuition for any pupils they think need it.

He thanked teachers, childcare workers and support staff for their efforts during the pandemic, and said he was “determined to do everything” he could to get all children back in school from September.

“We will bring forward plans on how this will happen as soon as possible,” he said.

However, early years providers and colleges for 16- to 19-year-olds are not included in the plans.

Nor was there any mention of summer schemes to help pupils get back on track for the start of the autumn term.

Education Secretary Gavin Williamson said the funding package would bring reform and protect “a generation of children from the effects of this pandemic”.

Schools were shut across the UK on 20 March. Apart from the children of key workers, most children have not been to school since then and will not enter a classroom until after the summer holidays.

Children in nursery, Reception, Year 1 and Year 6 have begun returning to primary schools in England, and some Year 10 and 12 pupils returned to secondary schools and colleges this week.

Schools in Wales are reopening at the end of June, with only a third of pupils in class at any time, while in Scotland, schools are preparing to reopen on 11 August.

Social distancing in schools has been halved to 1m (just over 3ft) in Northern Ireland, where ministers are aiming for a full reopening of schools on 24 August.

Labour said ministers should convene a taskforce – involving trade unions and scientific and health experts – to help all pupils return to school safely as soon as possible.

Shadow education secretary Rebecca Long Bailey said the plans “lack detail and appear to be a tiny fraction of the support” needed and called for a “detailed national education plan to get children’s education and health back on track”.

Plans for the subsidised National Tutoring Programme have been developed with a group of social mobility organisations and academics led by the Education Endowment Fund (EEF), a charity.

The EEF has said that until now, access to tutoring has been the preserve of wealthy families – but this would no longer be the case as schools would be able to seek subsidised tutoring.

However, individual schools would be expected to pay 25% of the tutoring costs in the first year, or from their share of the £650m in extra funding being made available to them as part of this package.

She called the move a tremendous opportunity to create a long-lasting change.

But he noted that the investment was expected to be spent on tutoring, rather than being left to head teachers to decide.

He was also concerned that there was no investment for sixth forms.

“As ever, we suspect the devil will be in the detail and we await further information,” he said.

David Hughes, chief executive of the Association of Colleges, said teenage college students deserved as much catch-up support as every other age group and it was “indefensible” to overlook them.

Bill Watkin, chief executive of the Sixth Form Colleges Association, said it would be “entirely unjustifiable” to exclude sixth form students from the package.

While Neil Leitch, chief executive of the Early Years Alliance, said the government’s decision not to include pre-schoolers “beggars belief”.

National Association of Head Teachers general secretary Paul Whiteman said he was pleased ministers had listened to calls for a longer term response, rather than short-term quick fixes.

“This is a considerable sum of money,” said Mr Whiteman – but he also warned there were many details still to be worked through.