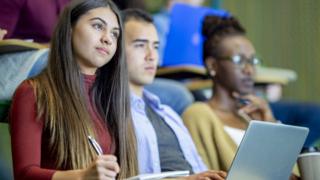 Universities in England have been accused by the universities minister of recruiting too many students for courses which do nothing to help their career chances.

“Quite frankly, our young people have been taken advantage of,” said Michelle Donelan, at a widening access event.

She warned of universities “dumbing down” and questioned the value of courses compared with student debt.

“Social mobility isn’t about getting more people into university,” she said.

Speaking to an event about improving access to higher education, England’s universities minister said rising numbers of students were not getting good value from universities.

“For decades we have been recruiting too many young people on to courses that do nothing to improve their life chances or help with their career goals,” she told the National Education Opportunities Network (NEON) group.

“Too many have been misled by the expansion of popular sounding courses with no real demand from the labour market.”

Jo Grady, leader of the UCU lecturers’ union, said: “Instead of making the case for education, the minister appears to be trying to turn some students off university by saying it is expensive and sub-standard.”

The government is expected to announce a drive towards vocational skills and further education, rather than higher education.

“True social mobility is when we put students and their needs and career ambitions first, be that in higher education, further education or apprenticeships,” she said.

She also said that universities needed to do “much, much more” to make sure that students from disadvantaged backgrounds are “recruited on to courses that will deliver good outcomes”.

“I want your access budgets not to be spent on marketing but on raising standards,” she said.

And asked about the use of contextual admissions to help the applications from the disadvantaged, she said universities needed to recognise individual circumstances, but “we don’t help disadvantaged students by levelling down – we help by levelling up”.

Ms Donelan said students, “particularly those from families without a family history of going to university”, were being left with debts “that didn’t pay off in any sense”.

The universities minister blamed the current student recruitment on changes made by Labour in 2004, when fees were increased to £3,000.

She said it meant “too much focus on getting students through the door, and not enough focus on how many drop out, or how many go on to graduate jobs”.

Ms Donelan also attacked standards in university, saying too many have “felt pressured to dumb down – either when admitting students, or in the standards of their courses”.

The minister called for a “new era on access and participation”.

“One that’s based on raising standards, not on dumbing down,” rather than “box ticking and marketing”.