‘Emergency food’ for families with nothing to eat 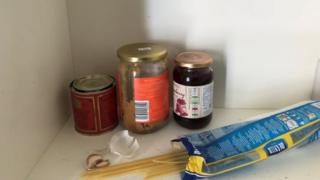 Some deprived families are running out of food because of delays in receiving free school meal vouchers under the government’s scheme in England, say school leaders.

Some schools are supplying emergency food parcels or buying their own vouchers for desperate families.

Parents say they are waiting up to 10 days for the government vouchers.

The Department for Education said it was providing extra cash for schools facing “unavoidable costs”.

Under the government scheme, families eligible for free school meals in England should receive vouchers worth £15 a week per child.

But Edenred, the company appointed to manage the scheme, has struggled to meet demand, even after its website was rebuilt over the Easter weekend.

Schools say they still encounter lengthy waits and error messages while logging on to order the vouchers.

Parents are then usually expected to download the vouchers themselves but with thousands in the queue, this can take hours.

The National Association of Head Teachers has been pushing for improvements after “a significant number of schools” reported problems.

Many are concerned about using cash from their own tight budgets to pay for emergency food.

At St Richard’s Catholic Primary School in Chichester parishioners raised more than £3,000 to support families whose livelihoods have collapsed under the lockdown.

Head teacher James Field says the school used the money to buy its own vouchers from local supermarkets and he personally delivered them to families.

Self-employed parents, particularly those in private rented accommodation, are “really struggling” to feed their families, he adds.

Chiswick School, in west London, is using money raised from donations to fund food parcels for families described by head Laura Ellener as some of the most vulnerable in the country.

“There are families with nothing, who rely on this money to feed their children,” she says.

“We are now delivering food parcels to those who have told us they have nothing to eat.”

Chair of governors James Whiting says some parents became so desperate they went to Gorringe Park Primary, in south London, over the Easter holidays, asking for food.

The school is in quite a deprived area, he adds, with about 80 pupils out of 450 already eligible for free school meals -and this number is growing under the lockdown.

School lunch assistant Vorona, lives in a room in a shared south London house with her six-year-old daughter.

She eventually managed to download and spend the first £15 voucher at the end of last week but her attempts to download the second have so far been unsuccessful – the screen freezes and she has to start again.

Another problem is the limited selection of supermarkets included in the scheme. The nearest is Morrisons – a bus ride away.

Vorona has asthma and being at high risk from coronavirus means she is scared to go out, let alone get on a bus.

“It does stress me,” she says. “My chest gets tight it’s not a good situation, especially for my child.”

Her friend Eunice, meanwhile, says despite having gone through all the required steps, her vouchers never appeared and she has found it impossible to get through to Edenred to check why.

“You just have to cope,” she says, “but I know there’s other people who have got them.”

Not having enough food is particularly hard with her children at home all the time, she says.

“They’re constantly wanting something to eat,” she says.

“It hasn’t got that bad – but it would help a lot if the vouchers came.”

A letter highlighting the scheme’s failings from their MP, Siobhain McDonagh to Education Secretary Gavin Williamson has been signed by more than 70 MPs.

“Everybody says that this virus does not discriminate,” Ms McDonagh says.

“But we know that the poorest families are hit hardest.

“They are more likely to be in precarious employment, unsuitable housing and worse health.

“Free schools meals are an essential lifeline of support for these families and it is vital that they receive the support that they are entitled to.”

The Department for Education said it was providing additional funding to schools on top of existing budgets, to cover unavoidable costs incurred due to the coronavirus outbreak, “including free school meal costs which are not covered by the national voucher scheme”.

Ministers were working to include more supermarkets in the scheme, said a spokeswoman, who added schools could print out vouchers for families with no internet access.