Home » Education » Exams are going ahead, but not as we knew them

Exams are going ahead next year across the UK – in a bid to return to some kind of normality and to avoid the chaos of this summer’s doomed attempts at producing replacement grades.

Or at least that’s the current plan – and they’re not necessarily exams as we might have known them, with trimmed-down content and a later start date.

Scotland is about to be the first to decide how this will work – with suggestions that the biggest change could be using assessed coursework to decide National 5 qualifications, rather than exams.

This would allow Highers to go ahead as written exams – which in the context of England, Wales and Northern Ireland, would be like using coursework and tests for GCSEs while carrying on with exams for A-levels.

And coursework could also be seen as a half-way house to using teachers’ grades again for next year.

All the exam plans across the UK are going to be different – but they all face the same two big problems. 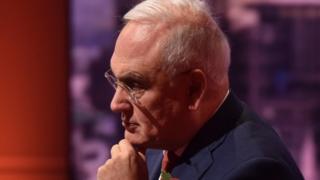 How can exams be run fairly when so much teaching time has been lost because of the pandemic?

And how do you make a definite plan for such an indefinite situation – where it’s impossible to know how much more disruption might lie ahead?

In England, arguments over exams have become intertwined with wider Covid-19 decisions about regional lockdowns, “circuit breaker” shut downs and ideas such as extending half-term breaks.

The former Ofsted chief, Sir Michael Wilshaw, sums up the problem – not least in that he himself is now back teaching in the classroom, helping schools which are struggling with staff absences.

“Given the fiasco of the summer, the government is probably right to go for end-of-year examinations,” he says.

But Sir Michael says significant numbers of pupils and teachers are already out of school – and if that situation deteriorates in the winter, and exams are no longer viable, there has to be a very clear back-up plan.

“If there’s too much disruption, the Department for Education and Ofqual have to make it absolutely clear to schools what forms of assessment will be used – which pieces of work, which mock exams and how they will be moderated,” says Sir Michael.

Planning for no exams

This preparation for a Plan B already appears to be in process in Northern Ireland, as well as their existing proposals to slim down exam content.

Education Minister Peter Weir said in a letter this week that the aim was for exams to go ahead, but: “We are also developing a plan for contingency should the situation change because of increased spread of Covid-19.”

In England, a delay to the exam season of a few weeks has been proposed by the government since early summer – and yesterday the universities minister said university terms could start later to accommodate any changes.

But there is a clear commitment to going ahead with written exams as being the fairest option.

The idea of a contingency plan in case exams do not go ahead might be politically difficult, when there is a desire to push the buttons for a return to normal life, but it’s becoming increasingly hard to see how such back-up plans can be avoided.

In Wales, the current plan is also to go ahead with exams – again most likely with a delay and with reductions in the course content.

Fitting exams in the time left

The much thornier questions are around how exams will work when so much time has been lost – and when more time is still ticking away. This is going to mean chopping back and reducing subjects so they can be taught and examined in the shrinking time available.

With much of this term already disappearing, it could mean not so much an oven-ready plan for exams, but boil-in-the-bag.

There are now less than 130 teaching days before the usual mid-May start of exams – and with almost one in five secondary schools sending home pupils because of Covid outbreaks, even more days are under threat.

Head teachers’ leader Geoff Barton said shifting the exam timetable back a few weeks would only mean a “marginal benefit” compared with the disruption that students have faced.

There has to be a very significant reduction in the content of exams, says the leader of ASCL union – and a different approach to how questions are set.

This could mean having exam papers with many more options, so that students will have a topic they can answer no matter how much or how little of the course they have been able to cover.

This proposal has been included in a joint plan of action, put out this week by teachers and head teachers’ unions, which calls for exams to be slimmed down, more flexibility over timing and standardised internal tests under exam conditions that could be used as evidence for grading if exams become no longer possible.

But as with anything exam-related, there is a pressure on time, and Mr Barton says there is great frustration among school leaders about the lack of clarity on what they should be preparing.

“The government really does need to get its skates on,” he said.