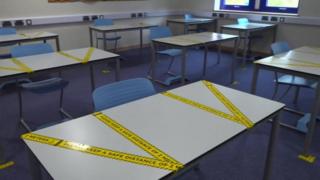 Teachers’ unions have denied suggestions by Conservative MPs they have been “actively obstructive” over the reopening of schools in England.

Union leaders said it was important for children to return to school “as quickly as possible” and when “safe to do so”.

But MPs accused them of running a political campaign to keep schools closed.

Unions appeared before the Education Select Committee on Wednesday morning.

Tory MP and committee member Jonathan Gullis, who is a former teacher and a former NASUWT union representative, said he was “absolutely outraged at the sheer damage the unions have done to the teaching profession”.

He accused the National Education Union (NEU) of running a “political campaign… to basically make sure schools did not open”.

Mr Gullis, MP for Stoke-on-Trent, said five conditions set out by unions for schools to reopen safely had been “effectively five tests”.

But Patrick Roach, the general secretary of the NASUWT, rejected this, saying they were conditions the government needed to demonstrate for the safe reopening of schools.

Dr Roach said schools “should be open as soon as possible” and that “some already are to a large degree”.

But Mr Gullis said: “Why is it that every time I see a union rep on TV they’re saying schools aren’t safe to open?

“A campaign has been run, whether you like it or not, to breathe fear into parents about the idea of sending their kids back to school… it has come across to parents that schools are death traps.”

Mary Bousted, joint general secretary of the NEU said the science surrounding Covid 19 was not negotiable and that it must “lead the process in relation to reopening” of schools.

Dr Bousted said the advice from government had been “woeful”, but said the risk assessments the union had produced were based on guidance from the Department for Education.

If committee members had a problem with it, she added, they should “take it up” with the department.

“We’ll support a full school reopening when it is safe.”