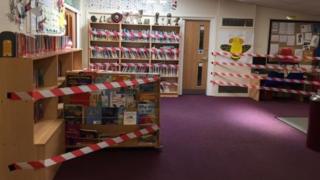 Teachers’ union leaders remain unconvinced that it will be safe to reopen schools in England on 1 June – after the publication of evidence from the government’s scientific advisers.

Paul Whiteman of the NAHT head teachers’ union says there is still no proof it would be a “wise thing to do”.

Some councils also reject plans for a phased return for primary pupils.

The Department for Education has said returning to school is particularly important for disadvantaged children.

The response from teachers’ leaders suggests the stand-off over the safety of reopening schools will continue – with warnings that the evidence released by the SAGE scientific advisory group was “inconclusive”.

“It will quickly become clear to anybody reading the papers that the science is not definitive,” said Geoff Barton, leader of the secondary heads teachers’ union, ASCL.

“The papers highlight the significant gaps in evidence, knowledge and understanding,” said Patrick Roach, leader of the Nasuwt teachers’ union.

Mary Bousted, co-leader of the National Education Union, said there was still only “weak evidence” on safety.

“We are surprised that the wider opening of schools proposed by Boris Johnson has not been modelled by SAGE. This points to a cavalier attitude towards the nation’s children,” said Dr Bousted.

The evidence from the scientific advisory group said the role of children in the transmission of Covid-19 was uncertain – and it “cannot be clear” the extent to which schools could be reopened without increasing the virus.

It said the risk to pupils going back to school was “very, very small, but it is not zero”.

While children seem less likely to be severely ill from coronavirus, there is less clear-cut evidence on how likely they are to be infected or spread the virus.

In seven scenarios for opening schools, the committee found opening nurseries and reception classes would have a smaller effect on the spread of the virus than primary schools. But opening secondary schools could have a bigger impact.

The advice says strategies such as pupils coming in on alternate weeks could be “good ways to stop extensive transmission chains in school”.

However, the advice also notes there is “limited evidence” on the impact of school closures on the rate of Covid-19 infections.

This is because the steps were taken at the same time as other lockdown measures – and it is “difficult to disentangle the individual impacts”.