The EU’s chief negotiator will travel to London for a fresh round of talks after both sides failed to break the deadlock. He told MEPs an agreement by the October 15 summit of European leaders was now looking unlikely. Mr Barnier suggested talks would now slip beyond Boris Johnson’s deadline into early November before a deal is found.

In a statement after the ninth round of talks, he said this week’s discussions had been held in a “constructive and respectful atmosphere”.

He said “positive new developments” in areas such as aviation safety and social security coordination.

But warned there are “persistent serious divergences on matters of major importance for the European Union”. 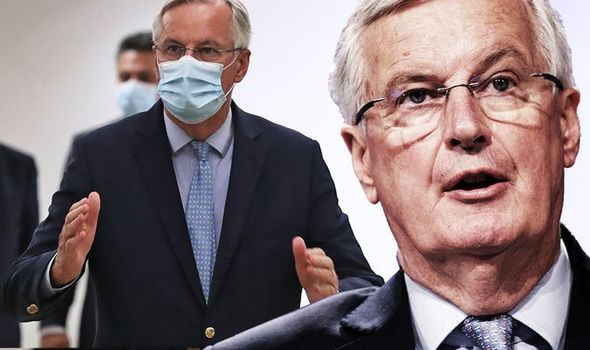 He said: “To reach an agreement, these divergences must necessarily be overcome over the next weeks.

“We will continue to maintain a calm and respectful attitude, and we will remain united and determined until the end of these negotiations.”

In a private Brussels meeting, Mr Barnier told MEPs he had managed to make progress in “one or two areas” but conceded there were still a number of “significant gap” between the UK and EU’s positions on fisheries and state aid.

A source familiar with the discussions said Mr Barnier poured cold water on the possibility of a deal being concluded ahead of the gathering.

The Frenchman claimed both sides are working on scheduling further rounds in a bid to have a draft legal text ready in early November.

The source said: “Looks like chances of a deal by the October summit have been blown as big gaps remain.”

After the talks in Brussels, Lord Frost insisted the “outlines of an agreement are visible” but differences on fisheries remain.

In a statement, the UK’s chief negotiator said: “In many areas of our talks, although differences remain, the outlines of an agreement are visible. This is true of most of the core areas of a trade and economic agreement – notably trade in goods and services, transport, energy, social security, and participation in EU programmes. This has however been true for some time.

“I am also encouraged that progress has been possible on a law enforcement agreement and that there has been convergence on the structure of the overall partnership.

“In other areas familiar differences remain. On the level playing field, including subsidy policy, we continue to seek an agreement that ensures our ability to set our own laws in the UK without constraints that go beyond those appropriate to a free trade agreement. There has been some limited progress here but the EU need to move further before an understanding can be reached. On fisheries the gap between us is unfortunately very large and, without further realism and flexibility from the EU, risks being impossible to bridge. These issues are fundamental to our future status as an independent country.

“I am concerned that there is very little time now to resolve these issues ahead of the European Council on 15 October.

“For our part, we continue to be fully committed to working hard to find solutions, if they are there to be found.”