The Brussels diplomat said the EU is willing to return to the negotiating table after a recent spat saw talks collapse. He held further crisis talks with Lord Frost this afternoon in a desperate bid to revive the process. Mr Barnier said: “I spoke again to David Frost today. “My message: we should be making the most out of the little time left.

Mr Barnier yesterday offered to intensify the talks and begin work on legal texts after months of refusing to put pen to paper on the Brexit deal.

He could also travel to London to face-to-face talks with Lord Frost on Thursday.

A Brussels source said the pair would remain in close contact over the coming days. 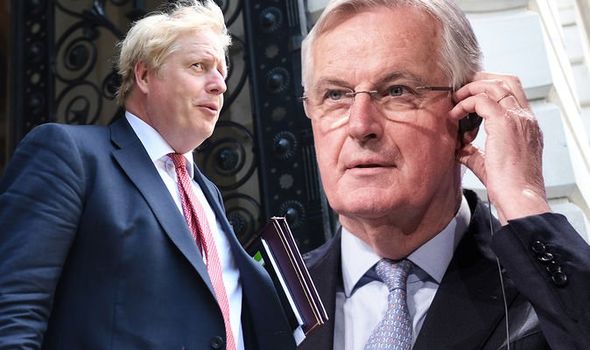 The UK has warned there is still no basis for future talks until the EU makes a fundamental change to its approach.

No10 said: “Lord Frost and Michel Barnier had a constructive discussion. The situation remained as yesterday, and they will remain in contact.”

The Prime Minister’s spokesman added: “We have said that our door is ajar to resume talks, but that can only happen if the EU fundamentally change their approach and also if they make it clear that they have done so.”

Yesterday Lord Frost insisted the EU would have to compromise further in order for Brexit trade talks to resume.

He said: “The EU still needs to make a fundamental change in approach to the talks and make clear it has done so.”

European capitals have lashed out at Mr Johnson, accusing the Prime Minister of political posturing.

One EU diplomat said: “They got what they wanted – intensified talks, on legal texts, on multiple areas. Now, they are just faffing around.

“All this posturing is only aimed at strengthening Johnson’s hand. If they don’t want to talk, that’s their choice. There is no point at this stage to give them anything more.”

Despite the tension, the European Commission has signalled the bloc will have to compromise in order to secure a Brexit deal.

Its chief spokesman said: “This is a question 101 for students in international negotiations. I think it’s pretty obvious in order to come to an agreement both sides need to meet.

“And this is also obviously the case in this negotiation.”