WASHINGTON — By the time she graduated at the top of her Notre Dame Law School class in 1997, besting 187 other students, Amy Coney Barrett was already a legal superstar. She would soon go on to clerk at the Supreme Court and, not long after, return to teach at her alma mater, admired by faculty and students alike.

Three years ago, she secured a judgeship, joining the elite ranks of the federal judiciary even as she remained grounded in her Midwest community — a frequent volunteer at her children’s grade school and a regular at Notre Dame football tailgate parties. In recent years, she has been a mentor to women in the university’s law program and in her community.

Her legal credentials and personal story are echoes of Justice Ruth Bader Ginsburg, the trailblazing jurist who died last week. But Judge Barrett’s ideological approach to the law could not be more different because she draws inspiration from Justice Antonin Scalia — one of the nation’s leading conservative legal thinkers before he died in 2016 — as well as a set of conservative beliefs that have shaped her life.

The conservative movement has been searching for years for a woman to assume Justice Scalia’s mantle — someone who could lead a new move to the right in American jurisprudence with the kind of personal appeal and intellectual rigor that conservatives say made him so effective for decades.

In Judge Barrett, 48, who is President Trump’s expected pick for Justice Ginsburg’s seat, conservatives believe they found their woman. Judge Barrett and her husband, Jesse Barrett, a former federal prosecutor now in private practice, have seven children, all under 20, including two adopted from Haiti and a young son with Down syndrome. A practicing Catholic, Judge Barrett is steeped not only in conservative legal traditions but also in a religious culture that friends say informs her approach to her whole life and to the law.

“Her life is an extension of her beliefs — it is not just some convenient set of neat propositions,” said Marjorie Dannenfelser, the president of the Susan B. Anthony List, an organization that opposes abortion rights. “That is compelling. Whether you understand constitutional law or not, you want someone that has that degree of character. She is the whole package.”

That is exactly what worries Democratic critics, who view Judge Barrett as the biggest threat in years to the canon of liberal legal principles that Justice Ginsburg worked to nurture and protect for more than four decades, chief among them a woman’s right to an abortion. They view Judge Barrett, who would be the youngest person on the bench and in a position to shape decades of American jurisprudence, as an all-but-certain vote to overturn Roe v. Wade, the landmark 1973 Supreme Court decision guaranteeing abortion rights.

The confirmation battle to replace a liberal woman on the court with a conservative one is already roiling the nation’s politics, even as a pandemic continues to rage across the country and Mr. Trump and former Vice President Joseph R. Biden Jr. engage in the final weeks of a bitter presidential campaign.

The fight over whether Judge Barrett belongs on the Supreme Court will underscore the country’s deep divisions about gender roles, rights for L.G.B.T.Q. people, abortion, workplace issues and health care. It will push the boundaries of the country’s definition of feminism and test whether a fiercely conservative female justice can serve as a legal and cultural trailblazer. 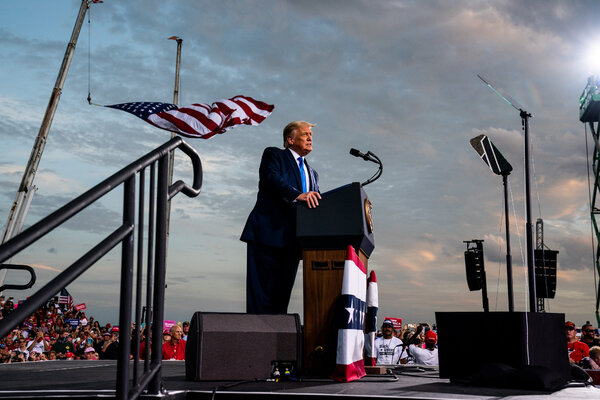 Both sides are already scouring Judge Barrett’s legal record as Republicans race against the clock toward a Senate confirmation vote before Nov. 3.

Democrats say she is eager to end safe and legal abortions, roll back access to health care for women and undermine progress toward gender equality. Republicans, who control the Senate, vow to fight back by daring liberals to demonize a religious woman with seven children and a personal story they say will resonate with voters of all kinds.

Judge Barrett’s story will be at the heart of the case that Mr. Trump and his allies try to make to lawmakers and the public as they seek to quickly push her nomination through the Senate before Election Day.

Born and raised in New Orleans, the eldest of seven children, Judge Barrett studied English literature before starting the legal education that would eventually lead her to the brink of the nation’s highest court.

Friends and allies say nothing shaped the trajectory of her legal thinking more than the 1998 Supreme Court term that she spent clerking for Justice Scalia, who became a mentor and a friend. Judge Barrett’s former fellow clerks describe her as the sharpest among that group of high-achieving lawyers.

“There was a sense in which she was an intellectual leader,” said Nicole Garnett, professor of law at Notre Dame, who clerked that year for Justice Clarence Thomas.

Brian Fallon, the executive director of Demand Justice, a progressive organization that opposes consideration of a Trump nominee before Inauguration Day, said Democrats should focus intensely on Judge Barrett’s public statements on Roe v. Wade and the Affordable Care Act, which her judicial opinions suggest she may vote to overturn.

“She may have a very nice family and she may have colleagues who attest to her intellectual capabilities as a professor at Notre Dame,” Mr. Fallon said. “She has experience on the federal bench. None of those selling points distract from the fundamental problem that they are going against what a majority of the public believes.”

In addition to scrutinizing Judge Barrett’s legal writings and judicial opinions, Democrats may focus on another part of her personal narrative: her religious convictions as a member of People of Praise.

The group is one of many to emerge from the global Catholic charismatic renewal movement of the 1960s, where millions of believers expressed their spirituality in ways more common to Pentecostal traditions, like the belief in prophecy or divine physical healing. Members of People of Praise commit to supporting one another in most all areas of life, from the spiritual to emotional to financial, and they pledge to donate 5 percent of their gross income to do so.

If she were confirmed, Judge Barrett would be the sixth Catholic on the court, replacing a justice who also lived her values, only differently.

Justice Ginsburg often talked about how she was inspired by her Jewish upbringing. In her office, she hung a poster that had the Hebrew words “Tzedek, tzedek tirdof,” an injunction from the Torah that means “Justice, justice shall you pursue.” She also expressed pride in being the first justice to have affixed to her office door a mezuza, a small box containing Hebrew religious texts that is a sign of faith for Jews.

At her funeral service at the Supreme Court on Wednesday, Rabbi Lauren Holtzblatt from Adas Israel Congregation in Washington eulogized her by saying that “it’s the rare prophet who not only imagines a new world, but also makes that new world a reality in her lifetime.”

Some of Judge Barrett’s critics say her Catholic beliefs are at the core of their concerns about how she will rule on abortion and other issues if she wins a lifetime seat on the court. Although she repeatedly stated that she would follow Supreme Court precedent on abortion in her confirmation hearing to be an appeals court judge in 2017, Judge Barrett has also been wary of broad interpretations of abortion rights. In 2018, she joined a dissenting opinion on the Seventh Circuit Court of Appeals expressing skepticism about a ruling that had held unconstitutional an Indiana law banning abortions sought solely because of the sex or disability of a fetus.

In her 2017 appeals court hearing, Democrats on the Judiciary Committee grilled Judge Barrett on her beliefs, provoking a hail of protests from Republicans and her supporters.

Senator Dianne Feinstein, Democrat of California, made the case directly.

“When you read your speeches, the conclusion one draws is that the dogma lives loudly within you, and that’s of concern when you come to big issues that large numbers of people have fought for for years in this country,” Ms. Feinstein said.

Judge Barrett said in the hearing that she took her Catholic faith seriously, “though I would stress that my personal church affiliation or my religious belief would not bear on the discharge of my duties as a judge.”

The ‘Dogma’ Question That Made Amy Coney Barrett a Conservative Hero

A remark from Senator Dianne Feinstein during Judge Amy Coney Barrett’s confirmation hearing in 2017 became a badge of defiance for conservatives battling what they view as anti-religion bias by Democratic lawmakers.

“You are controversial. Let’s start with that — you’re controversial because many of us that have lived our lives as women really recognize the value of finally being able to control our reproductive systems, and Roe entered into that obviously. I listened to your answers to Senator Grassley’s question, and it leaves me a bit puzzled because you have a long history of believing that your religious beliefs should prevail.” “How do you evaluate the precedents, plural, with respect to Roe?” “The Supreme Court precedents?” “Yes.” “Well, Roe and Casey and its progeny, as you say, Roe has been affirmed many times and survived many challenges in the court. And it’s more than 40 years old, and it’s clearly binding on all courts of appeals. And so it’s not open to me or up to me and I would have no interest in, as a Court of Appeals Judge, challenging that precedent. It would bind.” “Why is it that so many of us on this side have this very uncomfortable feeling that, you know, dogma and law are two different things. And I think whatever a religion is, it has its own dogma. The law is totally different. And I think in your case, professor, when you read your speeches, the conclusion one draws is that the dogma lives loudly within you. And that’s of concern when you come to big issues that large numbers of people have fought for years in this country.” 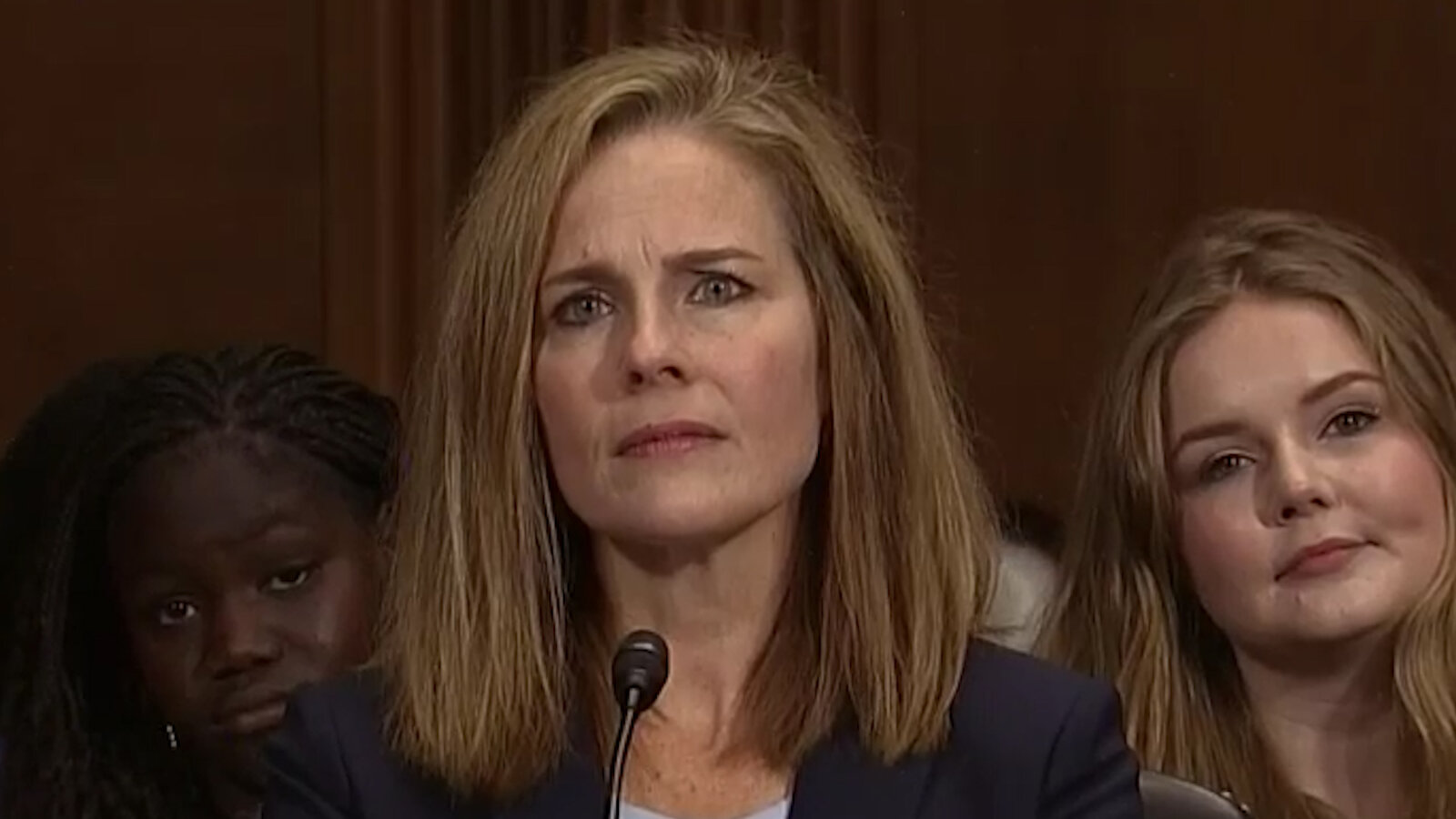 Among the documents that Democrats may cite is a 2006 speech to Notre Dame graduates in which she spoke of the vocation of law as a higher calling, and implored students to “fulfill the promise of being a different kind of lawyer” after they left the university.

“That you will always keep in mind that your legal career is but a means to an end, and as Father Jenkins told you this morning, that end is building the kingdom of God,” she told the students that year, referring to the words of Jesus in the Gospels. “If you can keep in mind that your fundamental purpose in life is not to be a lawyer, but to know, love and serve God, you truly will be a different kind of lawyer.”