WASHINGTON — Representatives-elect Cori Bush, a progressive Democrat wearing a Breonna Taylor face mask, and Marjorie Taylor Greene, a QAnon-backing Republican whose entourage sported “Make America Great Again” gear, arrived at freshman orientation in Washington within minutes of each other on Thursday, offering vastly different visions for their parties and for a new Congress.

The freshman class of the 117th Congress — featuring not only a surge of conservative women who upset centrist Democrats last week at the polls, but also left-leaning insurgents who ousted establishment Democrats in primaries — is undergoing an unusual pandemic-era acculturation on Capitol Hill.

“We’re going have to be able to work together,” Ms. Bush said of her Republican counterparts. “Hopefully, they’re willing to listen to me. I’m willing to listen to them. I’m already seeing ‘Make America Great Again’ hats, but I have on my Breonna Taylor. So we’re going to talk and hopefully this 117th, it will show the diversity.”

Dozens of soon-to-be first-term lawmakers began the biennial introduction to Congress this week, a process not unlike orientation at a new school. With flashy badges as temporary identification instead of the member pins they will be issued in January, the members-elect picked up House-issued laptops and phones, sat through presentations on security, health protocols and setting up offices, and wandered through the virtually empty Capitol, snapping photographs with one another and of their new workplace.

It was a learning experience all around.

Ms. Greene, who was seen briefly removing her American flag mask upon checking in at orientation on Thursday, declined to speak with reporters but said she had introduced herself to her new colleagues with a diatribe against the wearing of face coverings to stop the spread of the coronavirus.

“Our first session of New Member Orientation covered COVID in Congress,” she tweeted. “Masks, masks, masks…. I proudly told my freshman class that masks are oppressive. In GA, we work out, shop, go to restaurants, go to work, and school without masks. My body, my choice.”

She appended the hashtag “#FreeYourFace.”

The virus is surging in Georgia, where over the past week, there has been an average of 2,460 cases per day, an increase of 26 percent from two weeks earlier.

Representative-elect Cori Bush, a Missouri Democrat, arrived at the new House members orientation Friday wearing a Breonna Taylor face mask. Ms. Bush said some of her Republican colleagues were unfamiliar with Ms. Taylor, who was killed by the police in Kentucky, leading to protests across the country.

I am — I am Breonna Taylor as far as I could be a Black woman murdered in my bed tonight, you know? But I am not Breonna Taylor. This Breonna Taylor was murdered in her bed at night. She does not have justice — murdered by the police. And I just want people to, you know, we have to stretch ourselves and pay attention to what’s happening in other parts of the country. But this has been national news for a long time. People have protested in the streets with this name, and it just saddens me that people aren’t — people in leadership, people that want to be in leadership, don’t know the struggles that are happening to Black people in this country. And it’s just disheartening. And it was hurtful, absolutely hurtful. And I didn’t hear it once, I didn’t hear it twice. I heard it several times. I’m being called, you know, Breonna Taylor today. But it’s OK because we’ll educate, and we’ll make sure that people know who she is, what she stood for — that she was an award-winning E.M.T. in her community, that she’s someone who deserves justice right now. 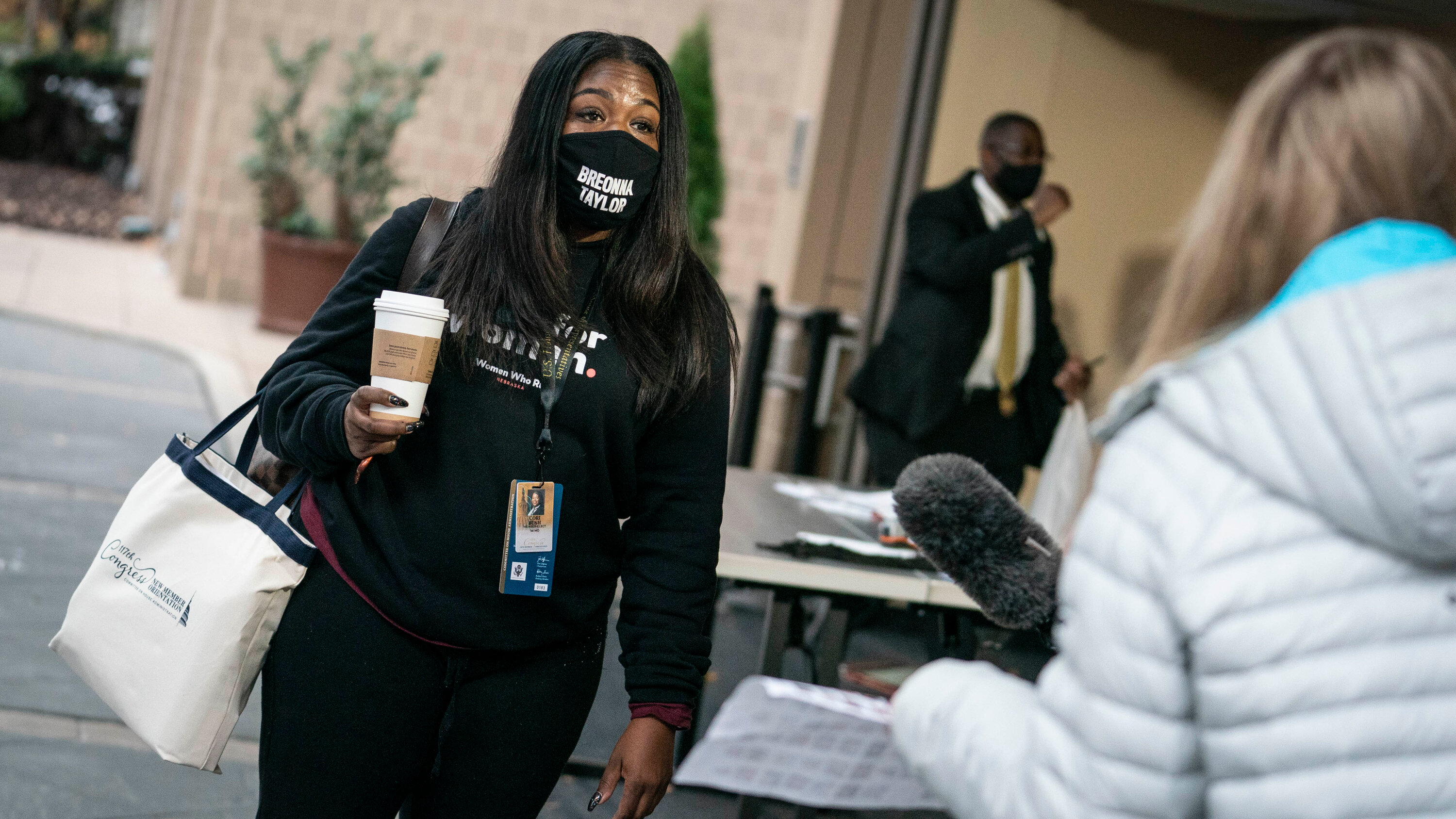 Ms. Bush’s mask bore her own political message, although on Friday, she said it had apparently been lost on some of her Republican colleagues, who seemed unfamiliar with Ms. Taylor, the woman killed by the police in Kentucky in a case that drew international attention and prompted huge protests.

“A few of my Republican colleagues have called me Breonna, assuming that’s my name,” Ms. Bush wrote on Twitter. “It hurts. But I’m glad they’ll come to know her name & story because of my presence here. Breonna must be central to our work in Congress.”

Despite Ms. Greene’s bombast on Twitter, the orientation this week was somewhat subdued — families left at home, minimal staff presence, socially-distanced seating and some members participating remotely — as coronavirus cases continued to spike across the country. It also was the first of the traditional transitions of power during the pandemic, as top lawmakers and staff wrestle with how to smoothly welcome newcomers to Washington without inadvertently creating a superspreader event in the nation’s capital.

The number of welcome parties has been curtailed, though staff members could be seen bustling through Statuary Hall on Friday to set up gold chairs, tables and purple flower arrangements for a reception for newly elected Democrats hosted by Speaker Nancy Pelosi of California. Dr. Brian P. Monahan, the Capitol’s attending physician, was on hand to outline the unique challenges of performing congressional duties during a pandemic and the necessary precautions required in the Capitol.

Drew Hammill, a spokesman for Ms. Pelosi, said Dr. Monahan had approved the dinner and “to be a further model for the nation, this event has been modified to allow Members-elect to pick up their meals to go in a socially-distanced manner.”

And the incoming lawmakers were instructed to remain masked for the duration of the orientation, a crucial safety precaution that posed an added challenge for aides, officials and lawmakers themselves who were toiling to learn all the new faces. (At least one, Representative-elect Nancy Mace of South Carolina, helpfully wore a mask emblazoned with her name.)

Representative-elect Ashley Hinson, a Republican, participated remotely from her house in Marion, Iowa, after contracting a mild case of the coronavirus. She said she was sorry to miss out on meeting colleagues in person, but was keeping up with them through a text chain with about 14 or 15 members.

“I’m still learning everything I need to know,” she said. “They’re streaming everything. So it’s as if I’m there.”

Perhaps the most significant feature of the new class is the fact that Republican women have doubled their numbers, adding members like Ms. Hinson and Ms. Mace. Of the 10 incumbent Democrats who lost their seats in swing districts in the election last week, eight were defeated by Republican women.

“It’s not just Democrat women that have the monopoly on breaking glass ceilings; Republican women have been doing it all their lives,” said Ms. Mace, the first woman to graduate from the Citadel, who last week defeated Representative Joe Cunningham, a centrist Democrat, to become the first woman to represent her state in Congress. “It doesn’t matter what your political affiliation is. If you want women to have a seat at the table, if you want to be in office, we have to run in order to win.”

But as the new members arrived on Capitol Hill, Representative Kevin McCarthy, Republican of California and the minority leader, found himself defending a pair of newly elected members on his party’s far right: Ms. Greene, a QAnon follower, and Lauren Boebert of Colorado, who has made supportive comments about the viral conspiracy movement.

Mr. McCarthy claimed both had disavowed the group, which has been labeled a potential domestic terrorism threat, and urged reporters to “give them an opportunity” before seeking to characterize them. While Ms. Boebert has said she is not a follower of QAnon and Ms. Greene recently said she had chosen to follow “another path,” Ms. Greene has never denounced the group, whose convoluted theory claims falsely that a cabal of Satan-worshiping, pedophile Democrats is plotting against President Trump.

In an interview with reporters, Ms. Boebert, a Glock-toting conservative firebrand, stressed the historic nature of Republican gains for women. Just 13 Republican women held seats in the House this year, while at least 27 will when new members take office in January — surpassing a record high of 25.

“I am not only the first female to represent that district, but I am the first mom,” Ms. Boebert said. “It’s an incredible honor to bring those values to Washington, D.C., in a time where I think we need more common sense.”

Additionally, at least seven new members of Congress — including Madison Cawthorn of North Carolina, the youngest member of Congress in the modern era — do not have college degrees.

“I definitely feel the weight of responsibility,” said Mr. Cawthorn, who succeeded Mark Meadows, the White House chief of staff. “I do realize that I’m 25 years old. I look forward to getting to learn a lot.”