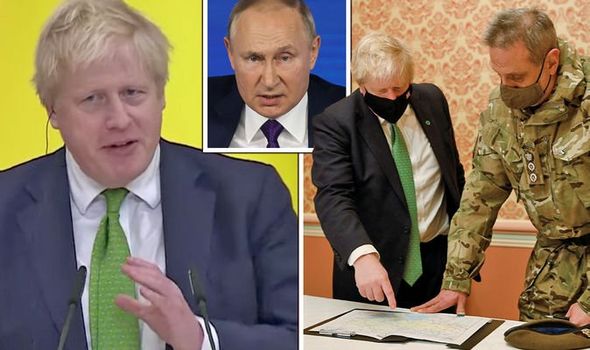 The Prime Minister this morning travelled to Kyiv to meet with Ukrainian President Volodymyr Zelensky in a sign of unity and strength against Russian aggression.

Western leaders are increasingly concerned Russia is plotting a full-scale invasion of the former Soviet territory.

President Vladimir Putin has denied any military plans but surrounded the country with his troops.

Britain, the US, France, Germany and EU leaders have all vowed to work together to protect Ukraine from any Russian aggression.

Extra UK troops are set to be sent to the region in the coming days as the world braces for a conflict to break out.

Around 100 British personnel are involved in a training mission in the country, and Downing Street said that since 2015, British Armed Forces had trained more than 22,000 Ukrainian troops.

Mr Johnson will hold the press conference with Mr Zelensky at 4.45pm after holding discussions on strengthening ties.

The Prime Minister’s official spokesman said Mr Johnson would discuss with the Ukrainian leader new financial support offered by the UK “and how the UK will continue to stand by Ukraine’s side in face of this”.

He added: “Obviously we want to hear from President Zelensky about his expectations of what he wants from the UK and other allies so we can continue to work together.”

A total of £88million has been pledged by the UK to the country in eastern Europe.

The cash will help “support stable governance and energy independence”, by supporting transparency and anti-corruption initiatives and efforts to reduce Ukraine’s reliance on Russian energy supplies.

Ahead of his visit, Mr Johnson said: “It is the right of every Ukrainian to determine how they are governed.

“As a friend and a democratic partner, the UK will continue to uphold Ukraine’s sovereignty in the face of those who seek to destroy it.

“We urge Russia to step back and engage in dialogue to find a diplomatic resolution and avoid further bloodshed.”