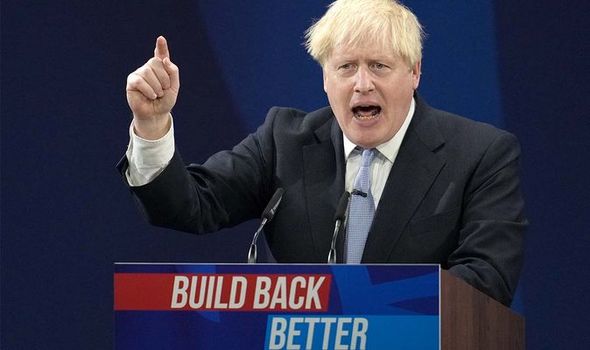 The Treasury appeared to dash hopes of financial aid for sectors struggling to cope with soaring costs in a row with the Business Department.

UK Steel director-general Gareth Stace said the Prime Minister must intervene or he will also have a steel crisis to deal with. He urged Mr Johnson – who is on holiday with wife Carrie and one-year-old son Wilfred in Marbella, Spain – to “bang heads together” in Government to find a solution.

The family are understood to be at Conservative peer Zac Goldsmith’s palatial home that reportedly costs up to £25,000 a week to rent. They are expected to fly back on Wednesday. It is Mr Johnson’s first foreign holiday since the start of the Covid pandemic.

Back home, UK steelmakers are facing energy prices five times higher than the average of last year. Shutdowns will become longer and more frequent and the industry has warned it faces long-term damage without help.

A £50million cash injection is being made by Liberty Steel, which will safeguard hundreds of jobs in the UK.

The announcement is part of a wider restructure of GFG Alliance, Liberty’s owner, which was forced to seek funding when its key lender collapsed.

The cash will allow their Rotherham plant to reopen after being closed since spring.

Business Secretary Kwasi Kwarteng yesterday said he was in talks with Chancellor Rishi Sunak about help for businesses pushed to the brink by high prices.

But the Treasury accused Mr Kwarteng of “making things up” and denied discussions had taken place.

Mr Kwarteng met the Energy Intensive Users Group, which includes steel, chemical, paper and glass manufacturers, last week and told broadcasters yesterday that “we need to help them get through this situation”.

The Cabinet minister said he was “working very closely” with Chancellor Rishi Sunak. But a Treasury source told Sky News: it was not the first time the Business Secretary “has made things up in interviews. To be crystal clear the Treasury are not involved in any talks”.

An insider later told the Daily Express the Treasury was “just setting facts straight” that it has “not been involved in talks” about financial support with the Business Department.

Some critics attacked Mr Johnson for taking a short holiday. But Mr Kwarteng said the Prime Minister had suffered great personal trauma while also steering the country through the pandemic over the last 18 months and deserved a break.

“What I would say is I am in regular contact with him.

“He’s also had a year-and-ahalf in which he’s almost lost his life to Covid, his mother passed away very sadly two or three weeks ago and he may have decided to take a short break. I think that’s something reasonable.”

Energy UK chief executive Emma Pinchbeck warned: “We are expecting more retailers to go out of business this winter.”

Steve Elliott, chief executive of the Chemical Industries Association, said talks with the Government are continuing.

“Mr Kwarteng is engaging with business,” he said. “He and his officials do understand the dilemma some energy intensive users are in.”

“I hope there will be some more positive news in the coming days as a 900 per cent rise in prices since the beginning of this year is clearly unsustainable.”

Stephen Fitzpatrick, of energy supplier Ovo, said: “There’s really nothing consumers need to worry about in terms of lights going out this winter or there not being enough power.”