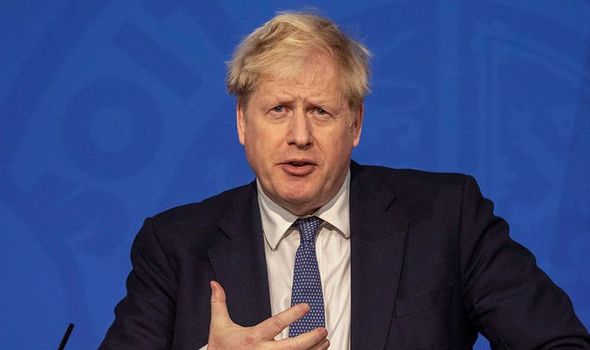 As the highly-infectious Covid variant hit a new high, the PM insisted there was no need to “shut down our country once again”. He also revealed the NHS was “on a war footing” with the virus ‑ as the daily Covid infection rate reached a record 218,724 cases.

Other figures released yesterday from December 23 revealed that one in 25 people were thought to have Covid then.

An “army” of volunteers are stepping in to plug the holes in healthcare staffing left by absences due to the virus, Mr Johnson said.

And, repeating his call for everyone eligible to get their Covid booster jab, he said it was “absolutely crazy” that people were ending up in intensive care because they had not been vaccinated. He said: “There are still almost nine million people eligible, who haven’t had their booster.

“People are dying needlessly because they haven’t had their jabs.”

He was backed by chief medical officer Sir Chris Whitty, who confirmed there is no sign of a surge in mortality rates despite the surge in new cases. He also said that boosters offer 88 percent protection against needing hospital treatment.

They were speaking at a Downing Street news conference last night after official data showed the number of patients becoming seriously ill was far lower than previous peaks in the pandemic.

A total of 15,044 people were in hospital in England with Covid yesterday, according to figures from NHS England. This was 58 percent higher than a week ago and the highest figure since last February, yet it is less than half the 34,336 at the peak of the second coronavirus wave nearly a year ago.

However, Mr Johnson said: “Anyone who thinks our battle with Covid is over is, I’m afraid, profoundly wrong. This is a moment for the utmost caution.

“But our position today differs from previous waves in two crucial respects. First, we now know that Omicron is milder than previous variants, so while hospital admissions are rising quickly, this is not yet, thankfully, translating into the same numbers needing intensive care that we saw in previous waves.

“Second, thanks to the fantastic national effort to get Britain boosted, we now have a substantial level of protection, higher than any of our European neighbours, with over 34 million boosters administered, including in England reaching more than 90 percent of the over-70s and 86 percent of the over-50s.

“If we all play our part in containing the spread of this virus, the disruptions we face can be far less severe than a national lockdown, with all the devastation that would bring for livelihoods and the life chances of our children.”

On NHS staff absences he said: “We’re building on-site Nightingale hospitals, as well as creating 2,500 virtual beds where people can be safely treated at home.

“We’ve bought more antivirals per person than anywhere else in Europe ‑ those are the tablets that reduce your chances of going to hospital once you’ve caught Covid.

“We’re mobilising our volunteers – the emerging territorial army of the NHS ‑ and we’re working to identify the NHS Trusts most likely to need actual military support.”

Mr Johnson said 100,000 essential workers in sectors such as food processing, transport, Border Force, nuclear and air traffic control will get daily tests from Monday to try to catch cases before they spread.

He added: “As our NHS moves to a war footing, I will be recommending to Cabinet tomorrow that we continue with Plan B, because the public have responded and changed their behaviour – your behaviour – buying valuable time to get boosters in arms and help the NHS to cope with the Omicron wave.”

Prof Sir Patrick Vallance, the chief scientific adviser, said there were “extraordinarily high levels of infection at the moment”.

He told the news conference: “I think with the degree of infection that we have got, we are going to see more hospitalisations for sure.”