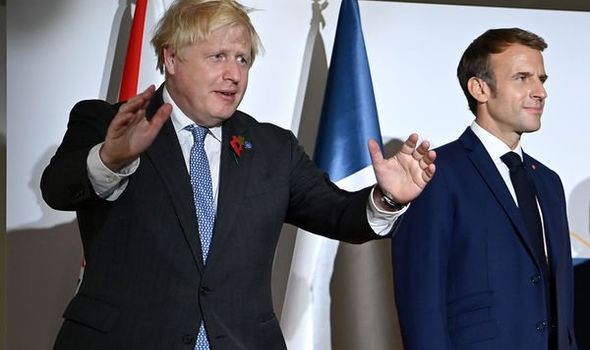 France and the UK are locked in a gladiatorial contest over fishing rights but the PM argues nothing less than the future of humanity is threatened by rising temperatures. As if to illustrate the life or death stakes of the climate crisis, Mr Johnson made impassioned pleas for world action in the ruins of Rome’s Coliseum. The prime minister considers the COP26 climate summit which kicks off in Glasgow this week as “the world’s moment of truth”.

More than 120 of the most powerful men and women alive will converge in the Scottish city tomorrow and on Tuesday for a “world leaders summit”.

Mr Johnson said: “The question everyone is asking is whether we seize this moment or let it slip away… Together, we can mark the beginning of the end of climate change – and end the uncertainty once and for all.”

Mr Johnson and French president Emmanuel Macron – who is up for election in April – will meet today at the G20 gathering in Rome before heading to Glasgow.

French fury over the allocation of fishing licences has cast a shadow over the G20, with Mr Johnson responding to the latest provocation by pledging to do “whatever is necessary to protect British interests”.

He warned that France may have breached the free trade deal between the UK and the European Union, and refused to rule out triggering a dispute resolution mechanism which could see the French facing demands for compensation.

Speaking in the city’s Coliseum, he admitted there was “turbulence in the relationship” but said the dispute over fishing licences was “frankly small beer, trivial, by comparison with the threat to humanity that we face”.

However, France – which wants Britain to grant more licences to small French boats – has threatened to take “targeted measures” if the row is not resolved by Tuesday. These could include blocking ports to UK vessels, intensifying checks on British boats, goods and trucks and disrupting electricity supplies to Jersey.

Mr Johnson did not hide his frustration with French behaviour when he met with European Commission President Ursula von der Leyen.

A Downing Street spokeswoman said: “The Prime Minster stressed that the French threats are completely unjustified and do not appear to be compatible with the UK-EU Trade and Cooperation Agreement or wider international law. The Prime Minister reiterated that the UK has granted 98 percent of licence applications from EU vessels to fish in the UK’s waters and is happy to consider any further evidence for the remaining two percent.”

Cabinet Office minister Lord Frost strongly defended Britain’s record and voiced concern at reported remarks by French Prime Minister Jean Castex that the EU must show there was “more damage to leaving the EU than remaining there”.

Lord Frost said: “I hope this opinion is not held more widely across the EU. To see it expressed in this way is clearly very troubling and very problematic in the current context when we are trying to solve many highly sensitive issues, including on the Northern Ireland Protocol.”

He claimed the French threats “unfortunately form part of a pattern that has persisted for much of this year”. He confirmed the Government is “actively considering launching dispute settlement proceedings”.

A senior Government source said: “We’ve been through painstaking discussions on every single French vessel in question, and have acted at all times in accordance with the deal struck with the EU. It’s incredibly disappointing to see France resorting to these threats, which if carried out would not only be entirely disproportionate to the issue at hand, but would put the EU in breach of the trade agreement and arguably international law.”

The UK Government argues that the French threats are “incompatible with agreements entered into by the EU” and it is the EU’s responsibility to ensure member states comply with these commitments.”

A UK source said: “These threats are just the latest in a long list of actions, and statements from the French, in less than a year since the Trade Agreement came into force. From explicit warnings about stopping energy supply to Jersey, to public threats about imposing customs controls unless we comply with their demands, this has been a concerted effort to undermine, and now breach the terms of the Trade and Cooperation Agreement.

“It is not the sort of diplomacy you’d expect from a close neighbour and raises questions around whether all French actions should now be judged in the context of their determination to show Brexit as a failure.”

Former Brexit minister David Jones took to Twitter, saying, in French: “Every time a French politician speaks these days he makes the case for Brexit.”

In the UK-EU post-Brexit trade talks, it was agreed that licences would be given to vessels if it could be proved they had fished in each other’s waters for years, but a key element of the dispute is the level of evidence that must be provided.

Mr Jones the Sunday Express: “I strongly suspect that the reason that they are not getting licenses is because the British authorities have quite properly come to the conclusion that they haven’t provided the evidence of previously fished there… This is everything to do with Macron’s attempt to get re-elected next year…

“Frankly, he’s looking quite ridiculous at the moment. It’s a case of a Napoleon complex, I think.”

Lia Nici, the Conservative MP for Great Grimsby, which is traditionally a major hub for the fishing industry, said: “What a great shame that a country such as France, with all of the beauty and benefits it has, has leaders of such poor quality that it has to debase itself in the desperate, bullying measures this letter reinforces. A respected western civilisation threatening to cut off power supplies and imprison it’s allies?

“Is France’s economy so desperately in need of the EU’s cartel that it needs to bully a friend for a few fish? Quite clearly its Prime Minister thinks so.”

Mr Johnson will hope the stand-off will not stop France and the EU getting on board with UK-led actions to limit the increase temperatures to 1.5 degrees celsius. Britain will try to convince the world that “time is running out to save civilisation from the catastrophic climate change”.

A giant body of Antarctic ice has been formally named the Glasgow glacier by researchers at the University of Leeds in honour of the summit.

The prime minister said: “By naming this glittering giant of nature after the city [where] humankind will gather to fight for the future of the planet, we have a stark reminder of what we are working to preserve. Glasgow represents our best chance.

“Just as the G20 shares a collective responsibility to act, so the solutions are in our hands. I hope countries will gather next week in a spirit of responsibility and ambition so we can keep the goal of 1.5 degrees alive.”

The prime minister’s spokesman stressed Mr Johnson’s determination to focus on this mission.

He said: “The Prime Minister does not want to be distracted from the important work of tackling climate change and is continuing to push countries to adopt ambitious climate change agreements… Should France proceed with the threats they have set out, we will act in a proportionate and calibrated manner.”